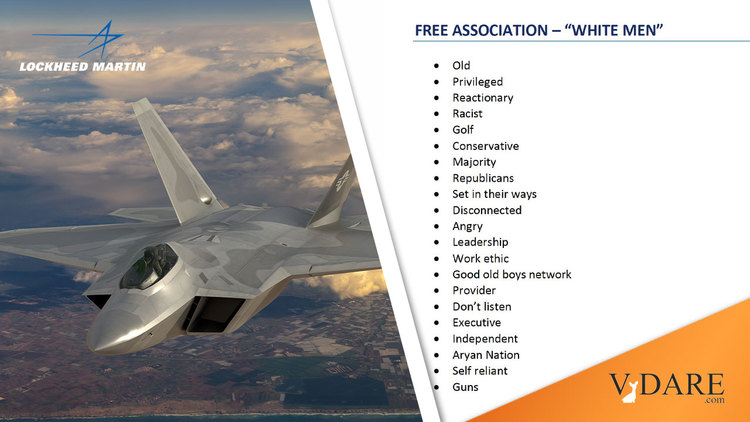 Earlier: Coca-Cola Forces Employees to "Try To Be Less White"

It’s no longer about profitability and return on investments for shareholders; it’s about a never-ending apology tour (and forcing white employees through dehumanizing struggle sessions) for America’s best and biggest corporations having been founded by and staffed with an overabundance of whiteness.

Because in The Current Year, there is nothing quite as grotesque to our managerial elite in charge of public and private institutions as that of whiteness.

Lockheed Martin, the nation’s largest defense contractor, put top executives through a three-day training to deconstruct their “white male culture” and unlearn their “white male privilege,” according to a new report.

Thirteen employees, including a former three-star general and the vice president of production for the $1.7 trillion F-35 fighter jet program, attended a program on Zoom last year led by the consulting firm White Men As Full Diversity Partners, according to City Journal’s Christopher Rufo. The firm works to help white men “awaken together.”

The diversity trainers posed the question, “What’s in it for white men?” A list of responses included, “I won’t get replaced by someone who is a better full diversity partner,” “[I will] improve the brand, image, reputation of white men,” and “I [will] have less nagging sense of guilt that I am the problem.”

The consulting firm claims that the “roots of white male culture” include traits such as “rugged individualism,” “a can-do attitude,” “hard work,” “operating from principles,” and “striving towards success”—which are “devastating” to women and minorities.

The employees were also asked to recite and internalize 50 “white privilege statements,” including: “My culture teaches me to minimize the perspectives and powers of people of other races”; “I can commit acts of terrorism, violence or crime and not have it attributed to my race.”

After the participants finished their white privilege statements, they were asked to recite and internalize 59 “male privilege statements,” including: “My earning potential is 15-33% higher than a woman’s”; “My reproductive organs are not seen as the property of other men, the government, and/or even strangers because of my gender.”

Next, participants were asked to repeat and internalize 50 “white privilege statements,” including: “My culture teaches me to minimize the perspectives and powers of people of other races”; “I can commit acts of terrorism, violence or crime and not have it attributed to my race.” pic.twitter.com/uA8tZXajFi

For the final step, the employees recited and internalized 59 “heterosexual privilege statements,” including: “I am not asked to think about why I am straight”; “I can have friendships with or work around children without being accused of recruiting or molesting them.”

The training concluded by asking the participants to read a list of “I’m tired” statements attributed to fictitious people of color and woman, such as “I’m tired of being Black”; “I’m tired of Black boys/girls being murdered”; “I’m tired of … the concept that we should be ‘colorblind.’”

“This is pure neoracism from a company that receives billions of taxpayer dollars every year,” Rufo said in a tweet thread sharing his reporting. “I call on the United States Senate to launch an immediate inquiry into the racist practices at @LockheedMartin. We must shut this down before it endangers our national security.”

The only true enemy to the Global American Empire is domestic whiteness with the USA, and for white people to realize this entire system no longer has a place for them or their posterity.

This writer, for one, feels safer knowing Corporate America is doing everything it can to eradicate whiteness in the workplace, save just agreeing to make it illegal to hire/promote white males.