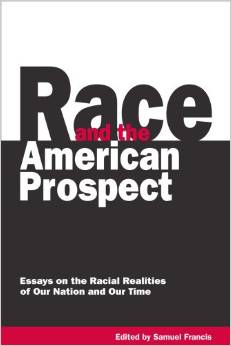 Before he died in February 2005, the major American intellectual Sam Francis assembled and edited an impressively erudite new collection of essays that has just now been published under the title of Race and the American Prospect. Its 446 pages consist of contributions by Sam and 14 other heretical authors, including Wayne Lutton's informative history of immigration, Richard Lynn's useful summary of "Racial Differences in Intelligence, Personality, and Behavior", Kevin Lamb's learned "The Reality of Race", and Jared Taylor's insightful "The Racial Revolution".

So scandalous is this book's theme that it is barely obtainable even over the Internet. After a half hour of searching with Google, I determined that Amazon has three copies in stock and that a couple of used book outlets might have a few more. Any conceivable variant of pornography could be obtained with far less effort. (VDARE.COM note: Race and the American Prospect can be ordered, for now, from Noontide Press.)

Indeed, at times Race and the American Prospect is a little too learned for my tastes. While reading the second essay that discusses Hegel's doubts about whether the unfolding of the World Spirit in history manifested itself in Africans, I started to feel like the little girl whose book report on Our Friends the Penguins, began, "This book told me more about penguins than I cared to know." Still, the great majority of Race and the American Prospect is quite readable.

"what the late Robert Nisbet termed the 'racial revolution.' While Marxism, Nisbet wrote, "has, on the whole, endeavored to persuade blacks and other races historically under white domination that they fall into the more general category of the proletariat," the "single fact … that stands out" is "that racial revolution as an aspiration is becoming increasingly separate from other philosophies or strategies of revolution."

In other words, the main objection that Hugo Chavez and Robert Mugabe have to capitalism is that whites own (or, in Zimbabwe's case, owned) most of the capital.

The book's contributors are mostly united in favor of a revival of "white racial consciousness". Sam notes:

"The absence of racial consciousness among whites disarms them as a group in confrontation with races that possess such a consciousness. Blacks, Hispanics, Asians, and other non-white racial and ethnic groups are able to act and react in highly unified patterns, political and cultural, to protect or advance what their leaders perceive as their racial interests …"

This is an extraordinarily rare stance in the present intellectual climate.

Not the "racial consciousness" part, of course. That's downright stylish. Today, Karl Rove swearing allegiance in person to the immigration goals of the National Council of La Raza (" The Race") is considered somewhere between unobjectionable and admirable.

No, it's the white part of "white racial consciousness" that is considered unspeakable.

Sam begins his foreword, "The Return of the Repressed", by pointing out:

"In the Victorian era, the Great Taboo was sex. Today, whatever the label we attach to our own age, the Great Taboo is race. The Victorians virtually denied that sex existed. Today, race is confidently said to be "merely a social construct," a product of the imagination, and of none too healthy imaginations at that, rather than a reality of nature."

Sam, in fact, is being slightly unfair to the Victorians. While they did not approve of sex being discussed by the British masses, they were perfectly aware that to rule an empire they personally needed to understand what the rest of the world thought and did regarding sex. Thus, Queen Victoria knighted for his decades of service to the Foreign Office the explorer and Oriental erotica maven Sir Richard Burton just three years after he published his translation of the Kama Sutra.

One might think that the rulers of the new American empire would likewise employ individuals who could quietly explain to them the racial realities of the world. But, evidently, they would rather risk their vast enterprises crashing in ruins than be accused of impurity of thought.

For example, more than four years after its publication, IQ and the Wealth of Nations by Lynn and Tatu Vanhanen, the classic account of the interaction between average national intelligence and economic success, remains off-limits for public discussion by anyone hoping for respectable employment.

In 2002, I took the then-new book to former junk bond king Michael Milken's annual Beverly Hills confab, the Global Conference. The only heavyweight who displayed any interest in it was the old pirate himself. I suspect that in Milken's buccaneering prime, he would have assigned the book to one of his apprentice brigands to digest for insights into making more money. But since Milken got out of the slammer, he's been too busy being virtuous to indulge for more than a few minutes in such forbidden fare.

I also showed IQ and the Wealth of Nations to keynote speaker David Gordon of the federal National Intelligence Council. I naively assumed that Gordon, being the National Intelligence Officer for Economics and Global Issues, might find relevant the implications of national intelligence for economics and global issues. But he greeted my exposition with the same politely dazed looked of incomprehension with which you'd respond to an explanation of the mathematics of string theory.

Now my reservations about Race and the American Prospect: For all its scholarship, I think the book fails to resolve certain conceptual conundrums plaguing the "white consciousness" movement.

One of the more troublesome is the question: Who is white? The West's dispute with the Islamic world exemplifies the difficult. It's not that hard to determine who is Caucasian, but, then, many of the Muslims denouncing America are themselves Caucasian.

Indeed, there's a paradoxical general pattern that the more racially Asian or black the Muslims, the less trouble they are for America. We get along better with Malaysians and Senegalese than with Iranians and Arabs, who are more closely related genetically to white Americans.

If you decide that Iranians and Arabs aren't white enough for you, then what about Chechens? Turks? Albanians? And if Albanians aren't white in your system, then how can Greeks and Sicilians be white?

And if you aren't going to let Greeks and Sicilians into your white American clubhouse, then how big and effective could the club ever hope to be?

Even more vexing for the theoreticians of the white movement has been how to classify Jews. Lately, Jared Taylor has been energetically calling for their inclusion in his movement, but many of his followers have demurred.

Another problem: white Americans these days really don't like getting down and wrestling with the Al Sharptons of the world for racial spoils. Major impediments have been the growth over the centuries of the Anglo-American notions of fair play and sportsmanship, which helped undermine the acceptability of racial discrimination.

Rather than inculcating "racial consciousness", my advice to American citizens is to develop "loved one consciousness". Be aware of what's in the best interests of your children, grandchildren, and other loved ones, living and as yet unborn. Most importantly, don't assume smugly that your descendents will all be part of an elite insulated from the world of troubles that our mass immigration system has been importing for the average American.

As I said in my VDARE.COM debates with American Renaissance's Jared Taylor, a self-identified white nationalist, I regard myself as a " citizenist" who emphasizes solidarity with my fellow American citizens rather than with my race.

From that perspective, I was struck that Sam Francis's introduction concludes with policy recommendations that coincide with the citizenist philosophy.

Sam rejects white supremacy in principle and white separatism in practice. He writes:

"Whites who today continue to harbor romantic images of the lost paradise of white supremacy should reflect that the civilization whites actually created usually originated in what were the largely racially homogenous populations of Europe, not in those where racial oligarchies prevailed (and eventually failed to prevail.")

(Similarly, in his chapter "Race and the South", lawyer Sam Dickson writes:

("Like most Southerners, I have ancestors who owned slaves and others who did not. During my childhood, my relatives took great pride in those branches of the family tree that were the wealthy, slaveholding ones. Now, from the perspective of late middle age, I have come to entertain reservations about these slaveholding ancestors. I see them in many respects as the precursors of the corporate interests in our society that are colonizing our nation with Third World aliens.")

"Racial separatism, far more than 'white supremacy,' is today favored by most whites advocating racial consciousness, but there appears to be little prospect of the larger white population embracing it in the near future."

While Sam objects to colorblindness as hopelessly naïve, he seems to estimate that colorblind policies are the best that American whites can hope for. So he ends up endorsing a series of colorblind reforms that citizenists would cheer. He calls for cracking down on immigration and

"the end of all 'affirmative action' programs … the repeal of all 'hate crime' laws and 'Politically Correct' policies and regulations … and the abolition of all multiculturalist curricula, 'sensitivity training,' and similar experiments in brainwashing in schools, universities, businesses, and government."

Of course, Sam's thoughtful moderation will do him no good with the intellectual Establishment or even the “Righteous Right”. But Steve Sailer says “hear, hear” to this.