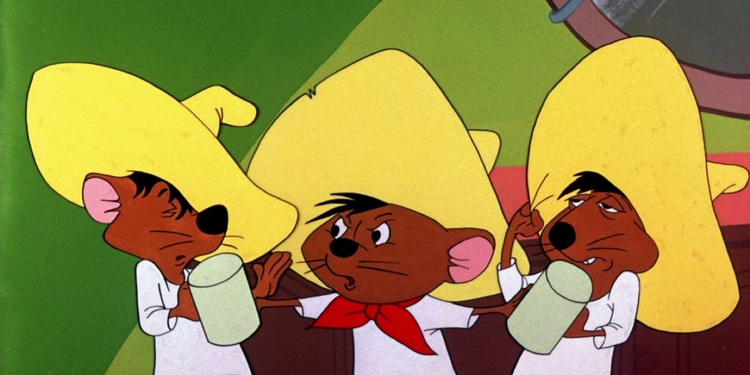 Given a choice between having public schools named after George Washington and having Speedy Gonzales cartoons on television, I'd probably take the former, but then no one has bothered to ask me about either one. Indeed, no one at the Atlanta-based and Ted Turner-owned Cartoon Network seemed to have asked much of anyone about removing the world's fastest Spanish-accented mouse from the airways, but now, after thousands of fans have demanded his return, the mouse is back.

Washington, meanwhile, is still having his name stripped off the schools.

The episode is almost a caricature, a cartoon if you will, of Political Correctness. Speedy Gonzales, in the event your parents kept you locked in the bathroom throughout your childhood, is a cartoon character who is depicted as a Mexican mouse, complete with sombrero, white pajamas and a Mexican accent, and the ability to run really, really fast. He was created more than 50 years ago in the Warner Brothers cartoon series, won an Academy Award in 1955, and has generally been a popular feature with young and old. Hooray.

But not everyone agreed, and last spring some fans began to complain that the character was vanishing from the network's channel. There were rumors that Mr. Turner himself had decided that the character—and a companion, Speedy's opposite, Slowpoke Rodriguez, who's as slow as Speedy is quick—was offensive to Hispanics. The network's spokesmen denied that was the reason, claiming that the cartoon's ratings had dropped. Nevertheless, it was not an unreasonable rumor because both characters stereotype Hispanics as much as Bruce Wayne and Clark Kent stereotyped WASPs. You might expect Hispanics with a tortilla on their shoulders to get a little bent because of Speedy.

But now it turns out that the very people leading the protest of the mouse's disappearance from the airways were Hispanics themselves. As the Washington Times reported last week, LULAC, the League of United Latin American Citizens, "the nation's oldest Hispanic-American rights organization," called Speedy "a 'cultural icon' who displayed plenty of admirable pluck."

"It's been silly not to have Speedy on the air because people watch him in Latin America, and they love him," Virginia Cueto, an editor at a Hispanic English-language website told the Times. "Thousands of Hispanics and others have logged onto HispanicOnline's message board to voice their support for Speedy's return." How sweet.

So the return of Speedy Gonzales would seem to be a kick in the enchiladas to the P.C. legions who wanted him off the air and a rebirth of common sense about a show and a character that people like and enjoy. But there's a bit more under the sombrero than that, it seems.

One fan on HispanicOnline wrote that "Speedy is more of a positive symbol. He always brings down that Daffy Duck to the point that the latter finally started respecting Speedy. People like Speedy." Indeed, last April Miss Cueto told the New York Times' Tom Kuntz that "many Hispanics view Speedy as a positive ethnic reflection because he always outsmarts the 'greengo' cat Sylvester."

What this tells us is that the reason Hispanics like Speedy Gonzales is not that they dislike the Political Correctness that probably took him off the air but they very opposite, that he has become a symbol of ethnic power—over whites. There's no particular reason to infer that Sylvester and Daffy Duck and other characters are necessarily white, but apparently that's how Hispanics themselves normally perceive the natural enemies of the mouse with whom they identify.

Like a good many other Warner Brothers cartoon characters, Bugs Bunny, being the chief, Speedy Gonzales is descended from what in folklore are known as "Trickster figures." Tricksters (Br'er Rabbit in the Uncle Remus stories is typical) win through cunning and cleverness against physically powerful but rather dumb and clumsy enemies. Both individuals and whole peoples who consider themselves downtrodden and persecuted tend to identify with Trickster figures—which is the main reason so many children like them in cartoons.

Of course, real folklore also has real heroes who win through valor and virtue rather than trickery. You won't find too many of those in American cartoons today.

Having Speedy Gonzales back on television is harmless enough, regardless of which races his opponents are, but there should be no misunderstanding as to why he returned. It wasn't because so many Hispanics (let alone non-Hispanics) got sick of the PC primness that tried to rub him out but because he has become a popular and powerful symbol of anti-white racial consciousness for the emerging Hispanic majority.

For those white Americans whose minds have not been rotted out by their own country's television, it might make them think about how they'll fare when they cease to be the majority.