SAID IN SPANISH (Sort Of): Hispanics Feel The Bern—With The Help Of A “Mexican Redneck,” Two Illegal Aliens, And Socialism

Regardless of the overall result on Super Tuesday, exit polls suggests that Hispanics were indeed all in for Sanders and his plans to nationalize much of the economy and give away lots of free stuff. It’s further evidence that America’s post-1965 immigration disaster is importing a minority that, far from being the “natural conservatives” of GOP strategists’ delusions, seems set to move American politics decisively to the Left .

Sanders shellacked Biden among Latinos in California and won handily in Texas:

Sanders has made an aggressive play for Latino voters across the country. He assembled a coalition that included young voters and Latinos in California, where Latino voters make up about 30% of the electorate. California was the biggest delegate prize. Sanders held an early lead with Latino voters by 30 points.

In Texas, where Latino voters make up 31% of the electorate, Sanders also held a wide lead, with support from 45% of Latinos. In Texas, Sanders leads younger Latinos, but Biden leads among older Latinos.

“Without Latino voters, Sanders would have really had a terrible night,” Barreto said. “Biden had a good night already, but Sanders was able to hold his own with a really big win in California and breaking even in Texas. All of that strength for him was Latinos and young voters who came out.”

In 2016, Sanders lost to Hillary Clinton in 10 of 11 states where Latinos made up a large share of eligible voters. This time, he’s made a stronger push.

Sanders has been trying to appeal to Latino voters with a progressive policy platform on immigration, but that isn’t the only issue that motivates them. He has also been speaking to their core interests, including health care and jobs. Starting last summer, he has poured resources in spreading his message, in both Spanish and English, to Latino communities. And he’s hired Latino staff from the grassroots advocacy community and integrated them into every facet of his campaign.

It wasn’t enough to carry him to a sweeping victory on Tuesday. But depending on how the delegate counts shake out in California and Texas, it could have kept his campaign alive.

Earlier, shrugging off his loss in South Carolina, Sanders prevailed in Nevada  “thanks in large measure to a 37-percentage-point victory among Latino caucus-goers” [Latinos, Sanders's secret weapon in Nevada, could make him unstoppable on Super Tuesday, by Hunter Walker and Andrew Romano, Yahoo News, February 22, 2020].

How is Sanders pulling it off this time given what happened against Clinton in 2016 in those Hispanic-heavy states? If Yahoo’s Walker and Romano are right, part of the credit—or blame, as the case may be—goes to a Mexican-American aide called Chuck Rocha:

[T]he seeds of that victory were sown five years ago when a staffer on Sanders’s first presidential bid had trouble reading a Spanish website. It was Memorial Day weekend 2015, about a month after the Vermont senator launched his long-shot challenge to Hillary Clinton. Sanders was short on resources; his staff was a skeleton crew, with no one who could translate Spanish. So the campaign summoned Chuck Rocha, the founder and president of Solidarity Strategies, a consulting firm specializing in reaching Latinos and blacks that was launched by Rocha in 2010.

Later in 2015, the Sanders campaign hired Solidarity Strategies and it wasn’t long before Rocha “was consulting on minority hiring, outreach and advertising for Sanders. By the end of the race he was in charge of all of the campaign’s print communications,” Walter and Roman reported.

Fifty-one years old, Rocha (pictured below, via Twitter) calls himself a “Mexican redneck.” The child of two teenagers, a “Mexican immigrant father and a white mother.” Rocha’s father actually left him (like Obama, Rocha seems to identify more with the side of the family of the parent who left him).  Later, Rocha's dad reappeared and  “got him a job at the local tire factory. The gig ended up being Rocha’s entrée into union organizing — and ultimately, politics.” 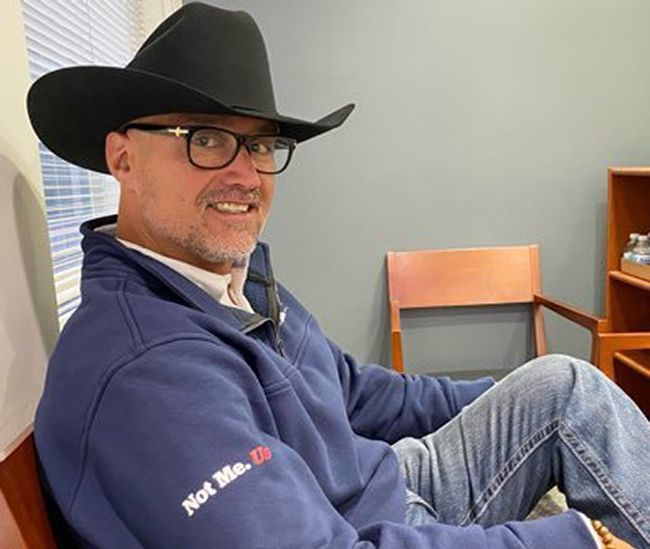 Eventually Rocha founded Solidarity Strategies, hooked up with Sanders and landed a gig as a senior adviser, Walter and Roman reported, whose portfolio

…includes general strategy, hiring staff and overseeing print ads and merchandise. Rocha also crafts the campaign’s Spanish-language ads on television, radio and the internet. If anyone is responsible for the huge Latino outreach effort that has helped propel Sanders to the front of the Democratic pack, it’s Rocha.

Rocha reportedly believes that Sanders’ success among Hispanics this election season shows that “campaigns have long botched their Latino outreach efforts by relying on largely white teams, insufficient investment and messages that aren’t ‘culturally competent.’ He has sought to mount a push for Sanders that is historically diverse, large and involves a tailored advertising blitz.”

So, no more of those antiquated “largely white teams.”

But here’s the thing. Rocha has wisely tailored Sanders’ Spanish-language ads to his Hispanic audience because he knows it favors welfare and activist government. Money quote from the Walker-Roman puff piece:

Rocha’s ads for Sanders aren’t straightforward translations of his English messages; they are written specifically for Latinos and focus on the aspects of Sanders’s platform that most resonate with that audience.

That’s the problem with Spanish-language ads and bilingual politicking. Politicians lie enough in one language. With two, the deceptions double! I’ve written about this for years.

Way back in 2002, I wrote about this phenomenon regards to a gubernatorial election in Texas. See"Nuestra Gente" And The National Question In Texas .
And, through the years:

Rocha’s monkeyshines with the translations push these radical ideas:

[R]aising the minimum wage, eliminating student debt, reinstating the DACA program, breaking up ICE and the Border Patrol and placing a moratorium on deportations to allow for an audit of past immigration policies.

Of course, Rocha emphasizes Sanders’ background as the child and grandchild of immigrants, producing an ad titled “Our Future” that runs thusly:

The history of Bernie Sanders is our history. His father came to this country seeking a better life. He didn’t know how to speak English and didn’t have much money. Bernie never forgot the immigrant roots of his family and that’s why he has always fought for us. That’s why we need Bernie as president. Our Future. Our Struggle.

Here’s the kicker, by his own admission, Rocha's Spanish-language level is "horrible".  So he has an aide to do it:

He mainly relies on a 30-year-old undocumented immigrant named Luis Alcauter to design and write [the ads].

Needless to say, Alcauter believes that President Trump “from day one has been fighting against me.’”

Incredibly, he isn’t the only illegal helping the Sanders campaign retail socialism and Open Borders to Hispanics. Meet Belen Sisa.

She wants illegals to know Sanders has courage like no other Democrat:

Get that? In 2020, you can hype your illegal-alien employees in an MSM hagiography with no fear of Immigration and Customs Enforcement.

And even worse, those illegals instruct us that they deserve “benefits” that, as bad an idea as they are in themselves, should go only to Americans.

Bottom line: The increasing power of the Hispanic voting bloc—and Sanders’ focused appeal to and success in wooing it—is putting the Historic American Nation and its political culture in peril.