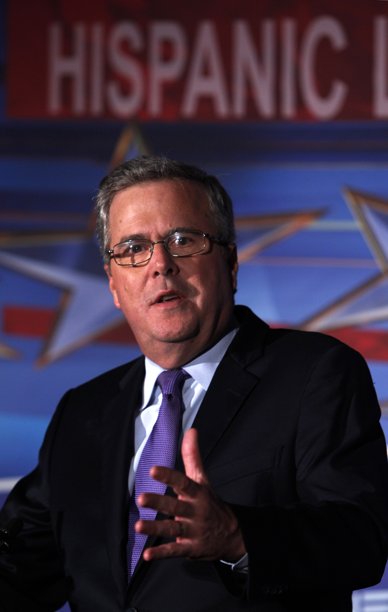 We can’t be surprised by the peculiar revelation that Jeb Bush registered to vote in 2009 as a “Hispanic.” After all, Jeb just seems to identify with Hispanics more than the historic American nation that built this country. As John Derbyshire put it, Jeb Bush Just Doesn’t Like Americans Very Much.

Of course, the whole “Hispanic” identity, as it exists in the United States, is a political racket—it’s rigged to include as many people as possible and maintain their separateness from mainstream America.

In Latin America itself, whites tend to be at the top of the socioeconomic ladder—not to mention within U.S. Hispanic organizations (or Mexican telenovelas). In that sense, Jeb Bush fits right in. Although of Anglo-Saxon origin, Jeb can function as a sort of paternalistic white leader and benefactor of the masses. Which is also compatible with Steve Sailer’s theory of the Bush family’s dynastic strategy.

My own family situation in some respects resembles that of Jeb Bush (not economically, alas) Both Jeb and I descend from 17th-century English colonists. We’ve both lived in Latin America, though I spent a lot more time there, and we both have Mexican wives and bilingual children.

But I believe the United States should remain an English-speaking country based on Anglo-Saxon culture—not forcibly transformed into a Spanish speaking extension of Ibero-America.

Tragically, that transformation is already occurring. If it continues, not only will Hispanics not assimilate into American culture, but an ever increasing number of Americans will instead reverse-assimilate into Hispanic culture. Jeb Bush, who reportedly speaks Spanish at home, is by no means the only example.

Consider the case of Republican Mike Coffman of Colorado. Coffman was elected to Congress in the 2008 election, taking office in 2009, representing the 6th District of Colorado after the great Tom Tancredo stepped down.

As late as 2013, Coffman had an A+ with Numbers USA, meaning he was solid on immigration.

Coffman has gone beyond Hispandering to turning his coat and reverse-assimilating. And for Fox News Latino, needless to say, that’s a good thing:

Congressman Mike Coffman has been studying Spanish for less than two years, but he launches into it with the seeming comfort and ability of a veteran speaker.

For Coffman and his fans, the language is directly related to his transformation on immigration:

The Colorado Republican, who won re-election in 2014 in what was considered the most competitive House race in the country, drew some skepticism when he began taking Spanish and going to Latino neighborhoods and adopting a more moderate view of issues such as comprehensive immigration reform.

Note that Coffman’s increasing political use of the Spanish language coincides with his “adopting a more moderate view of issues such as comprehensive immigration reform.”

As Fox News Latino’s Llorente (email her) explains, there was a redistricting in 2011, after which “suddenly the predominantly white, Republican area was ethnically diverse—including 20 percent Latino—and was winnable by a Democrat.”

Coffman actually says he needed “to reach out to Latinos” in order to stay in Congress.

But what began as a survival tactic, Coffman said, developed into a genuine interest and respect for Latinos and the Spanish language. Where many politicians drop such outreach and nearly vanish from certain communities once an election is over, Coffman, who won re-election in 2012 and 2014, engages with Latinos and studies the language as if he were still campaigning.

“Es muy importante para la comunidad,” Coffman said in an interview with Fox News Latino where the questions were in English but he often responded in Spanish.

“It’s a sign of respect for the community,” he said, translating his response to why he dove into learning Spanish, a language he continues to study several times a week with his Colombian-born tutor. “It’s been exciting for me to reach out to Hispanics, Asians, African immigrants and learn.”

“My district totally, dramatically changed,” Coffman said. “I lost a lot of my more Republican areas, and got a heavy immigrant population.” Suddenly, he was addressing issues such as immigration from a perspective he had lacked before.

So rather than the seat being won by a Democrat, it is now held by a Hispandering Republican who will support the continuing Hispanicization of the country. Which in turn gives more power to the Democrats. Brilliant.

My perspective: Congress to address immigration from a perspective of American sovereignty, American workers and the historical American nation. But that’s not what Coffman has in mind.

As Llorente’s celebration of Coffman continues, her hero is just speaking Spanish better and better, and getting more wrapped up in the cause:

Now, [Coffman] was formulating his views and ideas after speaking directly – without translators – in Spanish to families separated after deportations, and undocumented [VDARE.com note: i.e. illegal] youths who had been in the United States since they were children and shared with him their despair over not being able to go to college or get a driver’s license because of actions their parents had taken.

What a hero! And Coffman discovers what they really think of the GOP, causing him to change his ways…

Coffman says he was taken aback by the chilly reaction he got at first by some Latinos and Asians to whom he made overtures. “They said to me that Republicans were anti-immigrant,” he said, “that was the Republican Party’s image even among legal immigrants. That surprised me as I was campaigning.”

So let me get this straight. Ronald Reagan signs the Amnesty of 1986, and Republicans go along with mass immigration for years, and yet they’re “anti-immigrant”?

Furthermore, as part of Coffman’s personal initiation into Mundo Latino, he “has softened his stance on immigration.” Whereas before he was against the DREAM Act and “expressed opposition to giving undocumented immigrants a break”, now he’s for Amnesty, repeating the same old excuses for it we’ve heard again and again.

Not only that, but Coffman has regular meetings with Mexican consulate officials.

And this summer, Coffman plans to go to Mexico and take a Spanish-language class there.

The Republican National Committee is holding Coffman up as a model for the kind of engagement Republicans must employ if they are to turn around their image among Latinos.

Jeb Bush and Mike Coffman have both hitched their wagons to what they think is an ascending star: a new Hispanic America. It’s nothing less than a condemnation of our entire system to observe how easily politicians can betray their constituents and their nation to totally identify with a growing, often illegal, foreign presence.

The victims, needless to say: white working class Americans, despised by both Republicans and Democrats. Perhaps as their economic situation worsens, we may see many of them start to identify as “Hispanic” as well. Minority identities, real and imagined, are both more socially prestigious and economically profitable than the Anglo-Saxon culture that built this country.

What will stop this decay: controlling our borders, stopping illegal immigration, consciously pursue a policy of assimilation, above all by promoting English as our national language.

That would give the historic American nation a chance of preserving itself.

Of course that presupposes that Americans are allowed, by the relentlessly hostile elite, to mobilize in defense of their own identity and to ensure that their country and culture don’t become just a footnote in someone else’s history.