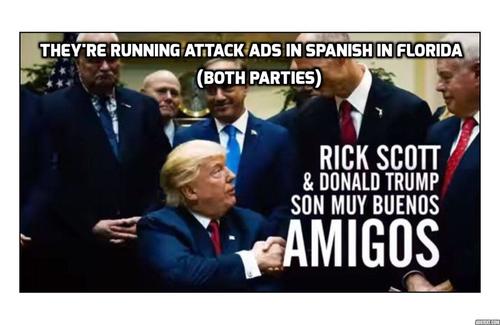 Both campaigns are advertising in English and Spanish. But why?

Knowing the language is officially a condition of citizenship. How can you be an informed voter if you don’t read the news in English? Otherwise, you would be prey to all-Spanish-language sources like Univision.

But as we see from the recent incident at Taco Bell in Hialeah, where two black Americans were refused service at the drive-through because they couldn’t speak Spanish, Florida’s demographic transformation is near-complete. A significant portion of the population can’t speak English and doesn’t want to. [Video shows Spanish-speaking Taco Bell employee refusing to serve English-speaking woman, By Eli Rosenberg, Washington Post, September 14, 2018] (Same in Manhattan.)

But another, Amigos (“Friends”), was released in Spanish and not English.

The amigos depicted in the ad are Scott and Donald Trump, their friendship being a bad thing.

Another Voice: Dime con quién andas, y te diré quién eres (Tell me with whom you walk, and I will tell you who you are, as Scott and Trump shake hands).

Si Scott llega a Washington hará lo que Trump quiere. (If Scott arrives to Washington, he will do what Trump wants).

Nelson’s campaign did not produce an English equivalent. This was only for Spanish-language voters. Maybe the Democrats fear Anglo a.k.a. American voters wouldn’t see Scott’s “friendship” with Trump as a bad thing.

But the Scott campaign response was weak. The very day after Nelson released Amigos, the Orlando Sentinel reported, “Scott criticized Trump over the president’s denial of Hurricane Maria casualties.” And the day after that, “Scott released his own Spanish language ad distancing himself from Trump.” [Rick Scott Launches New Spanish Language Ad Distancing From Trump, by Steven Lemongello, Sept. 14, 2018].

The ad, titled Compromiso, features Scott speaking Spanish, presumably with the aid of a teleprompter:

When I am not in agreement with what President Trump does or says, I have said it. My only commitment is with you. For me, the most important thing is that your family has the best opportunities. I ask for you vote so that together we can make Washington work for your families. I am Rick Scott. I approve this message. I know that with your help we will continue working.

And it’s been going on for years.

In 2002, the Democratic candidate in Texas’ election for governor presented himself as a conservative Democrat in English and a Great Hispanic Hope in Spanish. Marco Rubio discussed amnesty on Univision in 2015, and just this month, Little Marco floated a proposal to invade Venezuela, once again, on Univision.

All this should bother Americans.

As for Florida, the influx of Puerto Ricans is worsening the problem. That’s because Puerto Ricans are American citizens. So when they move to the mainland U.S. they vote. Democrats bank on that.

Scott has welcomed them, and as of June 30, had visited Puerto Rico seven times as governor of Florida. So he’s exacerbating the problem. It’s as if he sees Puerto Rico as a part of Florida. Or is it the other way around?

Because of the Puerto Rican influx , as I recently reported, a federal judge ordered Florida to provide more Spanish-language sample ballots in 32 more counties. This Obama-appointed kritarch, Mark Walker, correctly observed that Puerto Ricans “are not educated primarily in English,” but that they “do not need to be” because “they possess the fundamental right to vote.” Thus, “Florida officials...must provide assistance to Puerto Rican voters who wish to vote.”

On the other hand, Puerto Ricans, especially later arrivals, like Scott.

Among Florida Puerto Ricans in general, Scott has a 75 percent favorability rating versus 62 percent for  Nelson. And breaking down Scott’s favorability further:

Also, Scott has better name recognition, which might explain the difference in favorability.

[A]bout 40 percent of each group of Puerto Ricans living in Florida said they had a “very bad” opinion of Trump with another 30 percent rating him as “bad.” His rating of “very good” ranged from 1 percent to 5 percent.

As for the long-term, 56 percent of Puerto Ricans “plan to stay indefinitely.” Just 3 percent “planned to stay less than a year.” And “41 percent said they didn’t know.” A significant 43 percent said they will not return to Puerto Rico. When it’s all said and done, probably even a higher percentage will want to stay permanently.

Of the 75 percent who have registered to vote; 57 percent are Democrats and a measly 12 percent are Republicans. For the 2017-2018 arrivals, 39 percent registered Democrat. Just 7 percent went with the GOP.

However this election turns out, the continuing influx of Puerto Ricans bodes ill for the GOP, no matter how much Republicans pander and palaver in Spanish.

My ideas on how to fix it:

In June, Puerto Rico’s non-voting representative in Congress introduced a statehood bill. Its 37 co-sponsors are mostly clueless Republicans [Puerto Rico Pushes For Statehood By 2021, by Veronica Stracqualursi, June 28, 2018]. How about a Puerto Rican independence bill?

As far as Spanish advertising goes, candidate Trump didn’t bother with it. Yet he still won and even garnered a tiny uptick in the GOP percentage of the Hispanic vote over hispandering losers John McCain and Mitt Romney. (Trump has also just said he opposes statehood—Trump Says Puerto Rico Statehood Is an 'Absolute No', By Renae Reints, Fortune, September 24, 2018)

Americans have to fight for our culture and prevent our country from becoming a colony of Latin America. It’s not that complicated. But requires courage to enact these reforms—and a thick skin to withstand the inevitable hysteria.

The U.S.A. is an English-speaking country. It should remain so.