Democratic vice presidential nominee Tim Kaine was just celebrated by the Main Stream Media for giving a campaign speech entirely in Spanish—the first (but probably not the last) time a member of a presidential ticket has done so [Kaine delivers speech in Spanish during church service, by Rebecca Savransky, The Hill, October 16, 2016]. This is just more evidence of the linguistic balkanization that mass immigration is imposing on America.  (Note also that Leftists don’t care about the “separation of church and state” if religious leaders are helping them). 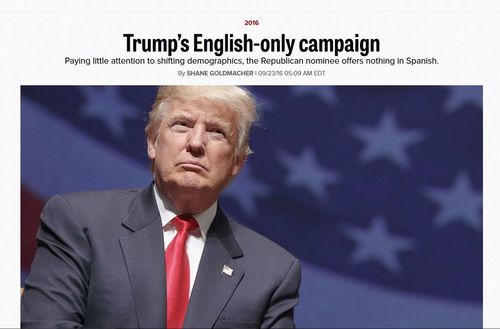 GOP Presidential candidate Donald Trump, to his great credit, is running an English-only campaign—which means no ads in Spanish and no website en español.

But Hillary of course is not, and the Spanish section of her website is quite telling what she wants to emphasize to Spanish-speaking voters about her immigration policies.

When you enter the Spanish section, there is a video featuring Mexican-U.S. dual citizen actress Salma Hayek. (Right.)It’s entitled Podemos demostrar que somos una comunidad poderos—“We can demonstrate that we are a powerful community.”

To all Latinos in the United States of America:

We cannot allow them to insult and abuse us anymore.

The Latino vote is extremely important.

We can prove that we are a mighty community.

Also, those of us who can vote owe it to the undocumented immigrants who don’t have a voice.

We have to vote. Votemos por Hillary Clinton.

A “powerful community”, eh?  Triumphalist— the language of conquerors.

And who is this “we’? In 2004, Salma Hayek took an oath of allegiance to “absolutely and entirely renounce and abjure all allegiance and fidelity to any foreign prince, potentate, state, or sovereignty of whom or which I have heretofore been a subject or citizen” in order to become an American citizen.

But of course she didn’t mean it. After all, she openly said wanted citizenship to “have a voice that supports the Latino community in the United States” and intended to “maintain both citizenships to help the Latinos.”

Becoming an American was just a means to her end of helping her ethnic tribe.

Recently, a mother in Florida wrote to Hillary Clinton about her son Francisco, age 11.  Francisco likes to say that he is a mixture of Hispanic heritage since he has American, Ecuadorian and Puerto Rican ancestry.

Francisco wears his “Love Trumps Hate” pin every day, and refuses to remove it. Even when his father warns that he could be the object of bullying, Francisco says ‘they always taught me that I should defend myself and my beliefs, and I think that Trump is wrong.’

Of course, 11-year old Francisco is presumed to be  in imminent danger of being bullied by intolerant Trumpsters, although there are plenty of examples of Trump supporters being attacked.

Next Luisa about Hispanic Heritage Month.

Today is the beginning of Hispanic Heritage Month and the stories such as those of Francisco remind us of the importance of defending and celebrating our rich culture and diversity.

…whether you are a Puerto Rican, a first generation immigrant or if your family has been here since before the United States were considered the United States- The Hispanics and Latinos have doubtless made uncountable contributions to our country.

Luisa claims this has been an “election defined by intolerance, and verbal abuse and Taco Bowls” and accuses Trump of beginning his campaign by suggesting [some!] Mexican immigrants are rapists and drug dealers. Why is this offensive, if you’re not a rapist or drug dealer?

Luisa also cites Trump’s criticism of Judge Curiel, without mentioning that Curiel is a member of the San Diego La Raza Lawyers Association. Not that Hillary’s campaign would object—but the La Raza ideology has no place in American jurisprudence.

Then there’s DREAMer college student Astrid Silva and the “Build the Wall “ chant at Trump rallies, with the latter apparently being a bad thing. Hispanic Heritage Month is proclaimed as “an opportunity to confront the racist attacks of Donald Trump” Conclusion: the exhortation: “And on the 8th of November, let us show that Francisco is right”.

Next to that article is [Trump no está “suavizando” sus políticas migratorias. Aquí está la evidencia. By Samy Nemir, Hillary campaign site, September 3, 2016].  That translates to “Trump is not ‘softening’ his migratory policies. Here is the evidence. “ (It’s also available in English)

Of course, VDARE.com readers, and most Americans, would agree with this. And on #7, is Hillary saying it’s good for immigrants who don’t believe in our constitution or who “support bigotry and hatred” to move here?

Needless to say, Trump is “degrading the immigrants,” he just wants to defend America.

And, as for #4, is the Hillary campaign pledging to bring in all the Muslims of the world?  All 1.5 billion of them? Well, recall Angela Merkel is Hillary’s heroine.

The first one is that Trump said that “Mexican immigrants” (but Trump was referring to illegal aliens) were bringing drugs, crimes and were rapists. And the second was the Muslim thing. Same old, same old.

Getting back to the main page of the Spanish section, scroll to the bottom for the obligatory article on Reforma migratoria integral  which means “comprehensive immigration reform”. By “reform,” of course, they mean Amnesty, the path to citizenship, access to healthcare for “families, regardless of migratory status” and naturalization.

That’s what Hillary is presenting to her Spanish-speaking readers. And these are her plans.

And guess which party she expects all these Amnestied illegal aliens to vote for in the decades to come.

She’s abolishing America. How much more treasonous can you get?

This is our moment of reckoning as a society and as a civilization itself.