Memo From Middle America | Rubio, Univision And Amnesty—Mistranslation Or Misdirection? 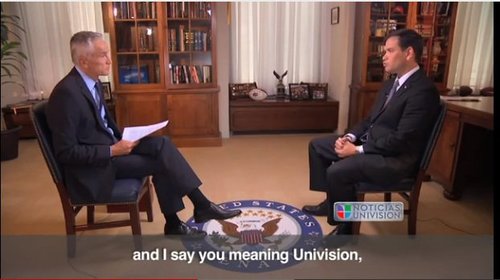 Rubio sits down with Ramos to talk Spanish

It’s a sign of things to come in the new bilingual America, as controversy rages over what Marco Rubio actually said in an interview with Jorge Ramos on Univision. Univision and Rubio himself are promoting the idea that the Florida Senator actually expressed opposition to President Obama’s unilateral immigration amnesty. But a closer look reveals Rubio is simply trying to tell Spanish speakers one thing, while telling the English speaking conservative base something else.

GOP candidate Marco Rubio was interviewed by Jorge Ramos, who as we know is Univision’s white Mexican anchorman. Ramos now holds dual citizenship but remains a tireless agitator for the transformation of the United States into a Latin American country.

Naturally, the Ramos interview with Rubio had to focus on “Hispanic topics”, chief of which was President Obama’s unilateral DACA Amnesty.

In an audio headline about the interview, Univision’s Maria Elena Salinas [Twitter] declared in Spanish “…en entrevista con Univisión, Marco Rubio dice que si llegara a la presidencia en algún momento, eliminaría DACA…” For you English-speaking folks, that would be translated as “in an interview with Univision, Marco Rubio says that if he arrives to the presidency at some point, he would eliminate DACA” [Univision Casts Rubio as ‘The Bad Guy’ by Yuri Perez, Newsbusters, April 16, 2015].

However, the actual Rubio interview shows us something else entirely. And as we can see in Univision’s official transcript of the interview (in both English and Spanish), Rubio simply suggested DACA can’t be permanent and restated his commitment to amnesty.

“I believe DACA is important. It can’t be terminated from one moment to the next, because there are already people benefiting from it. But yes, it is going to have to end. It can’t be the permanent policy of the United States, and I don’t think that’s what they’re asking either. I think everyone prefers immigration reform.” Univision Casts Rubio as ‘The Bad Guy’ Yuri Yuri Perez, Newsbusters, April 16, 2015

Several times, Rubio repeated the statement that the DACA program must end, but the entire gist of his argument is that, as president, his goal would be to bring about “immigration reform,” aka Amnesty, which he says “everyone prefers”.

Other outlets picked up on the story and reported on Rubio’s endorsement of Amnesty, notably Grabien (“The Multimedia Marketplace”) and Breitbart, which ran a piece entitled “Marco Rubio In Spanish: Obama’s First Executive Amnesty ‘Important,’ People ‘Benefiting From It’” [By Matthew Boyle, Breitbart, April 17, 2015]. And no one could really claim to be surprised by this, considering Rubio’s immigration record.

Yet the very next day, Breitbart issued a new report that showed Rubio attempting to reposition himself as an immigration patriot.

…a closer look at the official transcript shows some misinterpretations in the translation, and Rubio’s campaign pushed back strongly against any suggestion that the Senator would allow President Barack Obama’s executive Amnesty to continue.

Wow, what a relief. So Rubio’s not for Amnesty, it’s just a mistranslation. It’s so great that his campaign aides are straightening us out on the matter.

As Rubio spokesman Alex Conant told Breitbart News, “Marco went on Spanish media this week and rejected a comprehensive immigration reform approach, said that the immigration executive orders won’t be permanent policy under his administration, and that he would oppose legalization today because we first need to prevent a future illegal immigration crisis by enforcing our laws.”

But the Conant statement is very misleading, probably deliberately. When Rubio says he rejects a “comprehensive immigration reform,” that just means he thinks the goals should be accomplished piecemeal, and not in one grand piece of legislation.

In the Univision interview, Rubio stated,

I do think that if I wind up being president, it will be possible to achieve new immigration reform. It won’t be possible for it to be comprehensive; that is, they are not going to be able to do everything in one massive bill. (Yo sí creo que si salgo presidente va a ser posible lograr una reforma migratoria nueva. No va a poder ser integral, es decir, no va a poder ser todo en un proyecto masivo. )

Conant claimed Rubio “would oppose legalization today because we first need to prevent a future illegal immigration crisis by enforcing our laws.” But Rubio said very little along those lines in the interview. And every politician, even President Obama, pays lip service to securing the border.

The bottom line is that Rubio accepts the presence of millions of illegal aliens in this country, and whatever semantic gymnastics her performs, Rubio believes they are here to stay. As he put it,

And we have to deal with 12 million human beings who are already here. And nobody, nobody is advocating a plan to deport 12 million human beings. So that issue has to be dealt with, as well. Y tenemos que lidiar con 12 millones de seres humanos que ya están aquí. Y nadie, nadie está abogando por un plan para deportar a 12 millones de seres humanos. Así que hay que tratar ese tema también.

The best part is that the next day, Rubio conceded that the “translation” issue was a red herring and that he would, in fact, do nothing to oppose Obama’s unilateral amnesty.

The chief spokesman for Sen. Marco Rubio (R-FL), Alex Conant, confirmed to Breitbart News in an on-record interview on Sunday that despite some initial confusion over the past couple days about the wording of two separate English language transcripts of Rubio’s Spanish language interview with Univision’s Jorge Ramos that aired this weekend, the thrust and meaning of what Rubio said was captured accurately by both transcripts—each of which shows just minor differences in wording, but not in meaning.

[Confusion Over: Rubio Team Confirms Both Translations Of His Spanish-Language Interview With Jorge Ramos Accurate, by Matt Boyle, Breitbart, April 19, 2015]

And this time, there is no mistaking Rubio’s meaning.

….reached by phone on Sunday, Conant confirmed to Breitbart News that both transcripts [The Grabien text and the Univision text] did, in fact, accurately capture what Rubio said in Spanish to Ramos on Univision: That he would, if elected president, not revoke Obama’s first executive Amnesty until a legislative solution took its place.

So you see, this really wasn’t about a mistranslation at all. It was the Rubio camp’s attempt to spin it.

We now have Marco Rubio on the record as being on the wrong side on illegal immigration. But we already knew that.

The real lesson of this fiasco is that bilingualism is going to lead to more and more confusion in the media and more deception in politics.

Why invite these problems? Why degrade further an already degenerate political culture?

Don’t ask Marco Rubio these questions. After all, the answer you will get depends on what language you speak.