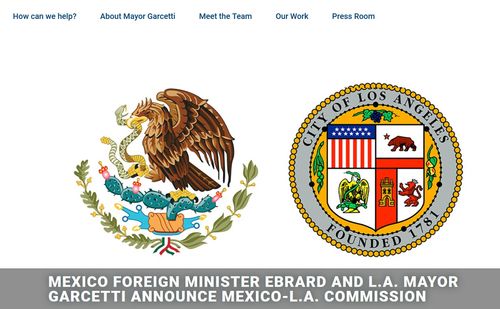 The two met in Mexico City, the capital’s Excelsior reported, and

…agreed to establish the “Mexico-Los Angeles Commission” that comprises residents of both entities, representing key commercial and cultural sectors. According to the Mexican Foreign Minister, “the objective of this effort is to improve the cross-border collaboration in areas of mutual benefit to Mexico and Los Angeles.”

Joining Foreign Minister @M_Ebrard, @PacCouncil & @COMEXI to launch MEXLA, a new Mexico-Los Angeles Commission, which will bring together leaders in tech, clean energy, education, tourism & other sectors to deepen our ties & expand our work together. https://t.co/61f6PFu1aj

So here we go again. Another day, another likely unconstitutional pact between Mexico and a US state or local government. Article I, Section 10 of the U.S. Constitution says a state cannot “enter into any Treaty, Alliance, or Confederation,” and that “no State shall, without the Consent of Congress...enter into any Agreement or Compact with another State, or with a foreign Power.” If a state can't, can a city?

But on to the purpose of Garcetti’s visit: “To deepen the relationship of that city with our country.”

Garcetti and Ebrard agreed on the expansion of “commercial, cultural and social links” between Mexico and the City of Angels. Ebrard, Excelsior reported, “highlighted the leadership and trajectory of Mayor Garcetti in the defense of the migrant community and the promotion of their well-being and integration.”

And Ebrard “recognized the support of the mayor in initiatives to spread and encourage Spanish.”

My emphasis. Note the key word: spread. So the mayor of an American city won’t simply encourage immigrants to preserve their language inside the home, but instead encourage them to spread its use outside the home.

When it would stop “spreading” we are not given to know. Perhaps when migrant “integration” reaches the point at which California is irreversibly Mexifornia?

Excelsior also observed that “that Los Angeles is the city with more Mexicans outside the country, 1.3 million, of which more than half a million were born in Mexico.”

Note that the “Mexican” population is not limited to people born in Mexico, but includes anyone of Mexican ancestry…anywhere?

And here the Open-Borders crowd says a foreigner who lands on American soil magically becomes an American.

Someone should tell that to Ebrard and the editors at Excelsior.

Our Open Borders continue to attract more and more trudging masses from the Northern Triangle (NT) countries of Honduras, Guatemala and El Salvador.

Indeed, as officials of Customs and Border Patrol said at a news conference about the border crisis last week, most illegals caught at the border are no longer Mexicans. Today, 70 percent are from the NT. They have realized Trump has more bark than bite. And as one CBP official said, they know that crossing the border with kids means they won’t be deported. That truth has spread throughout the NT on social media and by word of mouth. [Press Briefing — CBP Releases Fiscal Year 2019 Migration Stats, U.S Customs and Border Protection, March 5, 2019]

On March 7, an unlicensed truck filled with more than 50 Central Americans, mostly Guatemalans, was traveling through the Mexican state of Chiapas, which borders Guatemala. The truck veered off a winding mountain road into a canyon, killing 23 and injured 33. [Ajustan a 23 la cifra de muertos por volcadura de camión con migrantes en Chiapas (They Adjust to 23 the total of Deaths from Truck Rollover with Migrants in Chiapas), by Isain Mandujano, El Proceso, March 8, 2019]

The next day, Prensa Libre of Guatemala put the wreck into context:

Both Mexican journalists and Osiel Salcedo, the Guatemalan consul in Tuxtla Gutierrez [Mexico] are in agreement that now the passage of indocumentados on these highways is more frequent, because the Pacific routes have been strengthened against the caravans of migrants that used them last year to arrive to the United States.

Salcedo told the newspapers that “the increase of migration by that route can be proven by the fact that each week…more Guatemalans are detained by Mexican authorities and returned to Guatemala.”

And Ursula Roldan, director of Institute of Investigation and Projection over Global Dynamics of Rafael Landivar University in Guatemala, said “migrants”—the PC term for illegal aliens, because it confuses them with legal immigrants—must adopt more difficult routes to enter Mexico when easier crossings are closed. Smugglers determine those routes. So illegal immigration through Mexico to the United States is a perilous endeavor

Another interesting note: “Migrants” from the three NT countries usually stick to routes unique to each country. A Jesuit priest with the order’s Network of Migrants said Guatemalans mostly use the central corridor, Salvadorans stay closer to the Pacific, and Hondurans use the Usamacinta River corridor.

Thanks to porous borders and an insanely weak asylum policy, Central Americans risk their lives for a shot at the Promised Land.

Mexico’s Sin Embargo has reported that a Mexican Indian lost her government job in Veracruz, a state on the country’s Gulf coast:

Coworkers of Guadalupe Tzopitl, who had been designated as director of the Department of Indigenous Education of the Veracruz Institute of Adult Education, complained that she was dismissed from her position by Hector Amezcua Cardiel, director of the IVEA, under the argument that “she does not understand things due to her origin and the indigenous culture she comes from.”

[Director de IVEA-Veracruz cesa a funcionaria: ‘No entiende por su origen indígena,’ afirma (Director of IVEA-Veracruz dismisses an official: ‘She doesn’t understand due to her indigenous origin,’ he affirms), March 9, 2019]

Her coworkers denounced this “injustice, abuse, discrimination and racism on the part of the government,” which is “allowing people to take jobs who were recommended by unions, cronies and lovers, and are dismissing people who even participated in the support of the MORENA [party] campaign.”

That view is understandable, perhaps, given that the person who lost her position, Tzopitl, has a Master’s degree and speaks several indigenous languages. Part of her job was visiting indigenous communities and providing them curriculum plans.

But Amezcua, indigenous himself, explained why he can work but she can’t. “I have been in indigenous zones, but I grew up in the city, I learned the customs from my grandparents who were indigenous, but I learned that they are two different worlds,” he told the newspaper.

So she hadn’t assimilated. Or “integrated,” as Ebrard might would put it.

On the one hand, Mexican officials rage against the United States for its “racist” border and other policies, including the treatment of Mexican nationals and the demand they assimilate to become Americans. On the other, in Mexico, an indigenous woman is fired because she’s too culturally removed from the Mexican mainstream and not well enough assimilated into mainstream Mexican culture!

Tzopitl’s co-workers blame her misfortune on a Leftist president’s ruling (leftist) political party: “The MORENA officials are showing that they are misogynists, racists.”

Bottom line: Mexico is riven by class, race, and culture. Let’s not import millions more of its conflicted people into the U.S. or permit those here illegally to stay.

The “maternity tourism” operations not only committed generalized immigration fraud and international money laundering, but they also defrauded the owners by renting apartments and houses used in their birth tourism plans. …

[F]oreign citizens, the majority from China, applied for visitors’ visas to come to the United States and they lied about the duration of their trips, where they would stay, and the purposes of their trips.

The Chinese “would come to the United States for three months to give birth so that their children would receive birthright citizenship.” The birth-tourism outfits “trained their Chinese clients how to pass the interview of the U.S. consulate in China to falsely affirm that they were going to stay in the U.S. for only two weeks. Their customers were also trained to deceive CBP in the ports of entry using loose clothing which would hide their pregnancies.”

And even worse, “many of the Chinese clients of birth tourism did not pay the medical costs associated with their births in the hospital, and the debts they were charged.”

And, remember, “these criminal networks not only defraud the migratory system, but also hospitals and apartment owners.”

Question: Is the Spanish-language Reconquista media worried that the Chinese will be rivals to their own readers in post-American America?