The family and I just visited Mexico again for Christmas and there are even more signs Mexicans are already returning to their country.

On my last visit, I noticed there was a new station at the border crossing called Repatriaciones (repatriations). On this visit, we entered Mexico on December 19th, 2016, and I went to the same immigration station. The repatriations desk was actually in business and was taking “customers.” There were more changes as well. In fact, the counter where I obtain my permit had been moved and was actually right next door to the repatriations section. It is now called Repatriación Humana, which means “humane repatriation”. It’s subtitled México está contigo (“Mexico is with you”).

A sign in the Repatriación Humana section listed benefits for the repatriated: food and water, a document to prove they have returned, information and orientation to help them and temporary lodging.

Parts of the station had been re-organized and I noticed places where people could acquire a driver’s license and a CURP (Mexican identification document).

It looks as though these are designed for repatriated Mexicans who may have been in the U.S. for a long time.

The Mexican government is already preparing to welcome home its countrymen. And though this is anecdotal, there seems to be at least some grudging respect for Trump here. I didn’t get into any arguments about Trump during this visit, but I heard a Mexican wish he had a leader who would stand up for Mexican jobs as Trump has for American jobs.

But that doesn’t mean the Mexican government and NGOs will stop meddling in our affairs.

It was attended by “migrant leaders of the United States” who hobnobbed with Mexican media and government figures, including Jorge Castaneda, former Foreign Minister and longtime Open Borders activist. According to El Financiero, “academics, legislators and migrant leaders” agreed the Mexican government needs a strategy to “confront the presidency of Donald Trump” [Académicos exigen un plan urgente para proteger a los migrantes, by Hector Gutierrez, December 18, 2016].

Indeed, activists at the meeting don’t think the Mexican government is doing enough to meddle, complaining about “the lack of official support and clear strategies.” They also denounced the “violence that has begun to be unleashed against [migrants.]”

Activists also complained the Mexican government was not ready to receive the deportees—seemingly ignoring the Somos Mexicanos program created for that purpose.

Of course, the real issue is not that these people think the Mexican government can’t handle receiving those repatriated. They just don’t want them deported in the first place. 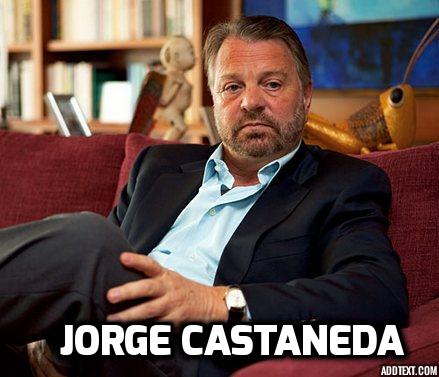 As our old buddy Jorge Castaneda put it:

This Saturday (December 17th) a meeting of migrant leaders of the United States was held in Mexico, under the sponsorship of the Nexos magazine and La Hora de Opinar [a news show]. Eunice rendon, ex-director of the Institute of Mexicans in the Exterior and invited thirty Mexican activists - some also with American nationality [my emphasis]- to explain their opinion over the current juncture in the United States, on the eve of the Trump’s assuming the presidency.

According to Castaneda, “each one of the participants expressed his fears, desires, demands, complaints and hopes in the face of what [major journalist] Lopez Doriga called a migratory emergency.”

So for the Mexican elite, the U.S.  enforcing its own laws is a “migratory emergency.”

One of the goals of the forum was to sound out the Mexican activists from the U.S., although it’s not as if Castaneda didn’t have his mind up already. Still, Castaneda polled the U.S.-based Mexican activists on whether they preferred to be sent back to Mexico immediately or whether they wanted an audience in the immigration court system. The majority opted for the latter.

Another question posed by Castaneda revealed interesting results: activists preferred money be spent by the Mexican government to reintegrate the deported in Mexico rather than blowing it trying to stop deportations themselves.

A final question was on whether Mexico should adopt the proposal of Castaneda that “the government of Mexico should demand the United States prove, with documents, the Mexican nationality of each deportee before accepting him. " The U.S.-based Mexicans voted overwhelmingly in favor of the anti-deportation trick, with only one dissenting.

According to the previously-quoted Financiero article, Castaneda wants the Mexican government to spend more money to on the “protection and defense of the rights of the migrants” (i.e. illegal aliens) He even advocated a special tax lasting six months “to protect the Mexicans.”

I’m not sure Mexicans actually in Mexico would welcome this idea. But then Castaneda is a rich elitist who thinks it’s ok to let his fellow Mexicans be deported to Central America just to teach the norteamericanos. He has no problem with burdening ordinary Mexicans for the costs of his policies.

The forum also came up with a to-do list to combat Trump:

Isn’t that occurring already? This is actually a legitimate one, certifying the skills of returning deportees to integrate them in the Mexican economy. That one also sounds good. NAFTA is a legitimate issue for the U.S. and Mexico (plus Canada) to negotiate. But immigration is not. Immigration policy is not a legitimate subject of negotiation with Mexico. It’s our policy, not theirs. [Source: Impulsas acciones de “Agenda Migrante” ante amenazas de Trump: @EuniceRendon, Oro Sólido, December 20, 2016).

We can expect plenty of meddling in the future. But the hysteria of elitist Mexicans such as Jorge Castaneda indicates that Trump is on the right track. It’s up to patriots to keep him there.

They even put a little sticker on it so the children would know the gifts came from the “C.D.N.”

Let’s hope next year more Mexican children can enjoy Navidad on their own native soil.