The Fulford File: Trump Them Again! —Use Executive Orders To Stem Creeping Bilingualism!

President Trump has discovered he can drive the Opposition Party crazy (well, crazier) with well-placed Executive Orders. VDARE.com’s suggestion: Trump them again! —with Executive Orders aimed at stemming America’s creeping institutional bilingualism, the evils of which have just been illustrated (again) in Canada.

The wonderful thing about Trump: he might just do it. On the campaign trail, he campaigned entirely in English. When Jeb Bush campaigned bilingually, Trump rebuked him.  Questioned about this by ABC’s Tom Llamas (a Miami Cuban “white Hispanic” who had previously harassed Trump for using the term “anchor babies”), Trump said: "Well, I think that when you get right down to it, we're a nation that speaks English. I think that, while we're in this nation, we should be speaking English," adding "Whether people like it or not, that's how we assimilate."  And Trump has added fuel to the fire by putting up no Spanish (so far) on his White House website. (Both Bush 43 and Obama had a lot of Spanish on their White House websites.)

The evils of official bilingualism were illustrated by a recent incident in Canada. 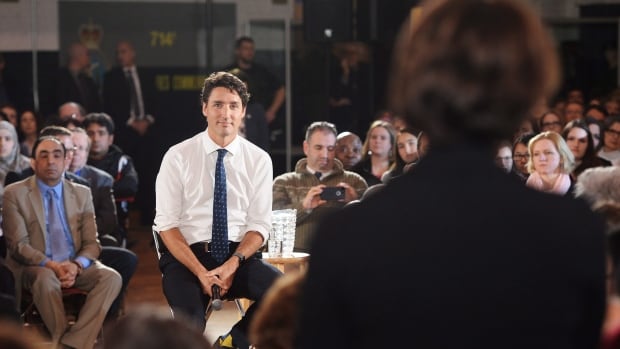 Justin Trudeau, now the Prime Minister, sort of “identifies” as French because his father Pierre Trudeau more less raised him that way, although he’s actually only about a quarter French—his grandmother was named Elliott, his mother named Sinclair. At a town hall recently in the French-majority, French-ruled province of Quebec, Trudeau answered all questions in French, because, he said “We’re in Quebec.” Then a member of Quebec’s small but long-established English-speaking minority stood up and asked him for help:

A woman asked in English what would be done to help Anglo-Quebecers seeking mental health services when those services are only available in French.

"Thank you for your use of both official languages," Trudeau replied in French.

"But we're in a French province so I will answer in French," he answered, as the woman grew visibly annoyed.

"All people who speak one of the two official languages should feel comfortable across the country," he said, in French, while highlighting the federal government's investment in health.

What does Trudeau’s pandering refusal to speaking English tell us, besides the fact that Trudeau is a total jerk? It tells us that bilingualism is about power. And it’s about jobs.

The reason that Quebec isn’t providing English-language mental health services in Sherbrooke, Quebec, in an area that still contains many  English-speaking residents, is because it wants to preserve doctor jobs for French-speakers—known in Official Canspeak as “Francophones.”

I say French-speakers, but really it’s about ancestry, or blood. “Quebecois pur laine,” a common expression used in Quebec, literally meaning “pure wool”, means of pure 16th and 17th century French blood. So Justin is not “pur laine” and the recent immigrants from Francophone Africa, Haiti and Morocco are even less so. No English-speaking (“Anglophone”) politician would dare to mention that kind of racial purity in either Canada or the US. But Quebec is different.

While VDARE.com has featured more American writers who can speak Spanish than most MSM outlets (and we have Derb, who speaks Chinese and can puzzle out Russian and German) most Anglo-Americans can’t speak any foreign language. Hardly any English-speakers are bilingual in the US, and it’s not much different in Canada. Which means that bilingual jobs tend to go to members of the minority language group. In America, that generally means Hispanics, and often immigrants.

A Houston program that couldn’t recruit American bilingual teachers from the Rio Grande Valley north of the border (because they didn’t want to move to Houston) found a lot of hungry young Mexican professionals in Monterrey, Mexico–who wanted to move to America:

“But recruiting internationally gives districts another option for hiring bilingual teachers — and helps get the best teachers, recruiters said.

“We all know that in the United States the Hispanic population is increasing, so the critical shortage for bilingual teachers will be there,” said Arnold Zuazua, head of bilingual teacher recruitment for the Houston Independent School District — which has recruited 47 teachers from the Mexico program in the past decade.

It was a year ago that 27-year-old Carlos Antonio Sanchez first heard a radio ad in Puebla, Mexico, announcing that Texas public schools were looking for professionals willing to become bilingual teachers.

Sanchez, an architect with a wife and a toddler, had never considered moving to the United States, but he liked the idea of helping children from his country by teaching them in U.S. schools, he said. Money was also a factor.

“It’s “a very high pay increase, because as you know, here in Mexico economic conditions are hard,” said Sanchez, who landed a job with Spring Branch.

Of course, a Mexican immigrating legally to help teach “children from his country” will mostly be teaching illegals. And he’s not helping them if their goal is to become assimilated Americans.

But it’s the fact that the (invented) requirement for Spanish-speakers means jobs for Mexicans that I want to focus on.

In 2005, the late George Jonas, a Hungarian immigrant to Canada, pointed out the consequences of official bilingualism in Canada.

If Canada was to be a bilingual country with most power concentrated in Ottawa's federal government, in the nature of things it would be francophones who would end up occupying most positions of authority in it. The inclination is always stronger for minorities to learn the language of a majority. Anglos weren't going to be bilingual in significant numbers. Francophones would be, and so rule the land

I pointed out in 2005 that what Jonas was saying is that Canada's Official Bilingualism has turned into a jobs program for Canadians of French ancestry, who are the minority language group, entrenching them in control of the Civil Service.

The now deceased Alberta Report magazine, which dissented from Canadian orthodoxy on a number of points, quantified this in 1988:

“Of deputy ministers and senior administrators the proportion is now 32% francophone. The Privy Council Office is 48.2% francophone. The Federal-Provincial Relations Office is 49.1%, the Canadian Intergovernment Secretariat a resounding 81.8%. The big-spending Department of Supply and Services, which decides whether a contract will go, say, to Montreal or Vancouver, is 41.1% francophone The Secretary of State Department, which hands out federal largesse, is 67.9%. The Public Service Commission, which chiefly decides on promotions within the civil service—will the job go to Peter Black from Winnipeg or Pierre Leblanc of Trois Rivieres?—is 60.5% francophone. And if the francophone proportion of the armed forces during the Second World War was somewhat lacking, the francophone proportion of the Department of Veterans Affairs compensates. It is 41.2% francophone.” [Links added]

What does that mean for the future of American bilingualism? Well, it means a lot of promotions for Hispanics, and it means that Americans will lose jobs because they can't speak Spanish.

Of course, in 2005, I was worried that the GOP might start requiring Presidential candidates to speak Spanish—leading to a parade of Bushes, Rubios, and (maybe) Cruzes. Note that, when rebuked by Trump in the GOP primary debate, Jeb replied that he’d been asked a question in Spanish, and he’d answered in Spanish: “That’s the reality of America, that’s the goodness of America. That’s the kind of America we want.” [Emphasis added.]

It’s not the kind of America Americans want, though. The election showed that.

The special privileges French enjoys in Quebec—which in an English-speaking community would be denounced as the most virulent nativism—can be quasi-justified on the ground that the Francophones are, in fact, natives, having been in Quebec since 1608.

But no such privileges for Mexicans can possibly be justified in the United States of America. It’s the Anglos—the Historic American Nation—who have been present since 1608 and before.  Almost all the Spanish-speakers in America came to the US since 1965. [The U.S. Hispanic population has increased sixfold since 1970, By Anna Brown, Pew Research, February 26, 2014]

Now that America has decisively rejected Jeb Bush’s plan for a bilingual America, what should be done about bilingualism?

Well, if I were one of these young people who do memes, I’d say “Kill it with fire!”

But since I’m not, I’ll quote the speech VDARE.com Editor Peter Brimelow gave at a CPAC forum in 2012—a speech that no-one in the MSM read before denouncing. (“White Nationalist” at CPAC, et cetera”):

Over a period of several years in the 70s and 80s, successive governments in the province of Quebec passed legislation which essentially crushed the use of English in Quebec. You could not require an employee to speak English in most circumstances. You couldn’t even display signs in English in Quebec. So for example, if you go into an English language bookstore in Montreal, you’ll see a sign that said “Romans”— which means “novel.” All the books themselves are in English, but the sign is in French.

I think that something like this Quebec language legislation is going to have to happen here in the U.S.

It’s not enough to have Official English as the government level. I get email all the time, from people in places like eastern Washington State, who say their kids can’t get jobs in McDonalds and stuff because they don’t speak Spanish. This creeping institutional bilingualism is a ferocious attack on the living standards of the American working class, the blue collar workers—just as current immigration policy in general is.

It will take Quebec-style legislation to stop it. They’ve shown us the way.

“Canadian Bilingualism & Multiculturalism as it Relates to America“ February 16, 2012,

Legislation—and a flurry of Trumpian Executive Orders. Three things Trump could do: This applies, by the way, to Federal Agencies that find themselves helping illegals. It’s a ferocious waste of the taxpayer’s money, it’s a jobs program for immigrants—I was going to say Spanish-speakers, but the same thing is going on in Chinatowns, Little Saigons, and Little Mogadishus across America. (Many of the workers being denied a job at McDonalds or Burger King because they can’t speak Spanish are black, but Trump could use the National Origin aspect to protect even whites.) Trump them again!