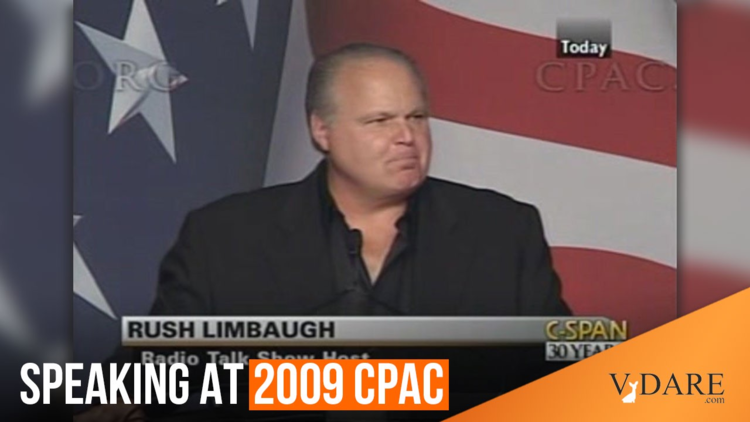 Rush Limbaugh Made Up His Mind On Immigration. Sadly, He Didn't Do Much About It

No-one has more cause than I to mourn a death from cancer.

And VDARE.com had many reasons to praise Rush Limbaugh throughout his epochal career, as well as reasons to be disappointed with him from an immigration patriot point of view.

I attended that conference. It was notable for the intense grassroots energy triggered by Obama's election—and the equally intense determination of CPAC's Conservatism Inc. managers to prevent the immigration issue from surfacing ["Regardless Of Their Doom/ The Little Victims Play": CPAC, Frum, Limbaugh…And America?, March 11, 2009].

Limbaugh played right along with his hosts. Of course this did not prevent him from being attacked for "racism" by, among others, David Frum, in proto-Never-Trump mode. Any potential leader of the Historic American Nation, however implicit, is going to be attacked for "racism." But, as I wrote at the time, I did not regret skipping Limbaugh's speech:

...I knew, from long observation, that notwithstanding his brilliant barn-burning delivery, he wouldn't actually say anything new, especially in the area of immigration and the National Question that are VDARE.com's focus. I think the National Review editors are mediocrities intellectually and morally, but they do know a political risk when they see one, from long practice in not taking them. And they were quite right to say of Limbaugh, in their obviously uneasy editorial on the controversy: "His views are not extreme and his manner is not, for that matter, particularly angry."

At this point, I think it's pretty clear Limbaugh is never going to make up his mind. He played a heroic role in helping stop the Bush Amnesties, but was noticeably hesitant about the tougher parts of the problem. I don't believe he has ever criticized legal immigration. And, of course, he was a blind Bush backer, although Bush's appalling immigration views were always obvious.

I can't really blame Limbaugh for this. He has a big business to run and he's very vulnerable to advertiser pressure. Patriotic immigration reform is simply not good for media careers. Even I was impressed by the fanaticism and unscrupulousness of the immigration enthusiasts after Alien Nation was published, including people I had regarded as friends for years. I sometimes wonder if I would have started writing about immigration at all if I had known that Buckley would betray us and purge patriotic immigration reformers from National Review. And Limbaugh's speech, of course, did not mention immigration or any related issue.

But I have to say now that I was not completely right about this. Several times in his later career, Limbaugh let slip that he had indeed made up his mind about immigration, and thought it was disastrous—for example here.

After the 2020 election, he even speculated about the increasing likelihood of secession because of demographic displacement, a favorite theme at VDARE.com. But then he hastily walked it back.

So he knew immigration was a disaster. But he didn't want to make a fuss about it—even in the face of death, when he had literally nothing to lose.

Somehow, that makes it worse.

Let light perpetual shine upon him.