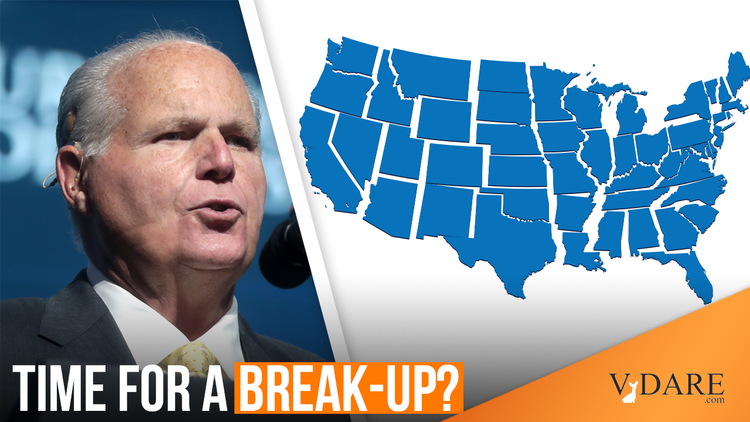 Rush Limbaugh Joins VDARE.com In Warning About The Possibility Of Secession

Here at VDARE.com, we’ve been discussing secession as a viable option for patriots for many years, as Americans try and salvage something of the Historic American Nation for their posterity. Most recently, Faith Goldy noted:

What if all the conservatives, white advocates, immigration patriots, and Christian gun owners simply moved out? Imaginably, it’d be a lot easier for Leftists to build their gun-free, refugee-rich Shangri-La. Why aren’t they encouraging our exodus? Likely because the mere idea of any society that openly rejects their values is intolerable to them.

Sure, the Pledge of Allegiance still speaks of “one nation under God, indivisible,” but that simply isn’t a reality in America 2020. Maybe the US is too big. With some 330 million people, no one can say there is a “national family.” Increasingly, there just seem to be mortal enemies.

The Right and Left—admittedly, more so after the election of Donald Trump—now regard each other, not just as political competitors, but existential threats to American society and to each other.

And all this invariably leads to talk of secession.

Secession. Disaggregation. Self-Determination. Balkanization. All words describing a people's will to determine their own destiny in the political order.

Well, we’ve reached a point where more and more prominent individuals on the right-side of the spectrum are talking about the viability of secession, including a man who was recently honored with a Medal of Freedom during Trump’s 2020 State of the Union.

Yes, Rush Limbaugh is now discussing the idea of secession with his massive audience, and the gatekeepers at Media Matters aren’t too happy:

RUSH LIMBAUGH (HOST): All right. Mr. Snerdley is asking if we’re ever going to be able to win. And he’s talking about elections. Votes. Are we ever gonna be able to win without taking back some of these cities? He’s talking about blue cities like New York, Philadelphia. I assume you mean Detroit? Do you include Milwaukee in this? Definitely, all right. What about Oakland, California? Too far gone. San Francisco? You think we can get San Francisco? Look, we won election after election after election without winning these cities or the states they’re in.

I thought you were asking me something else when you said, “Can we win?” I thought you meant, “Can we win the culture, can we dominate the culture.” I actually think -- and I’ve referenced this, I’ve alluded to this a couple of times because I’ve seen others allude to this -- I actually think that we’re trending toward secession. I see more and more people asking what in the world do we have in common with the people who live in, say, New York? What is there that makes us believe that there is enough of us there to even have a chance at winning New York? Especially if you’re talking about votes.

I see a lot of bloggers -- I can’t think of names right now -- a lot of bloggers have written extensively about how distant and separated and how much more separated our culture is becoming politically and that it can’t go on this way. There cannot be a peaceful coexistence of two completely different theories of life, theories of government, theories of how we manage our affairs. We can’t be in this dire a conflict without something giving somewhere along the way.

And I know that there’s a sizable and growing sentiment for people who believe that that is where we’re headed, whether we want to or not -- whether we want to go there or not. I myself haven’t made up my mind. I still haven’t given up the idea that we are the majority and that all we have to do is find a way to unite and win, and our problem is the fact that there are just so many RINOs, so many Republicans in the Washington establishment who will do anything to maintain their membership in the establishment because of the perks and the opportunities that are presented for their kids and so forth. [Rush Limbaugh: “There cannot be a peaceful coexistence” between liberals and conservatives: Limbaugh: “I actually think that we’re trending toward secession”, Media Matters for America, December 10, 2020]

Unfortunately, Limbaugh immediately walked back his comments when they went viral, by claiming he was “misunderstood”:

Then on Limbaugh’s Thursday program, the host seemed to backtrack by claiming that he was only speaking to what bloggers and people on Twitter have been saying.

“I simply referenced what I have seen other people say about how we are incompatible, as currently divided, and that secession is something that people are speculating about,” the host added. “I am not advocating it, have not advocated, never have advocated it, and probably wouldn’t.” [Rush Limbaugh Goes Viral for Talk of Secession, Now Claims It Wasn’t His Idea, by Peter Wade, Rolling Stone, December 10, 2020]

Let’s be honest: it doesn’t matter if Limbaugh said he was “misunderstood.” His audience listening to his program probably all nodded their heads, knowing there is something seriously wrong with the state of the country and how secession is a viable option to ensure America stays actual American in large sections of the country.

For our posterity, right Mr. Limbaugh?