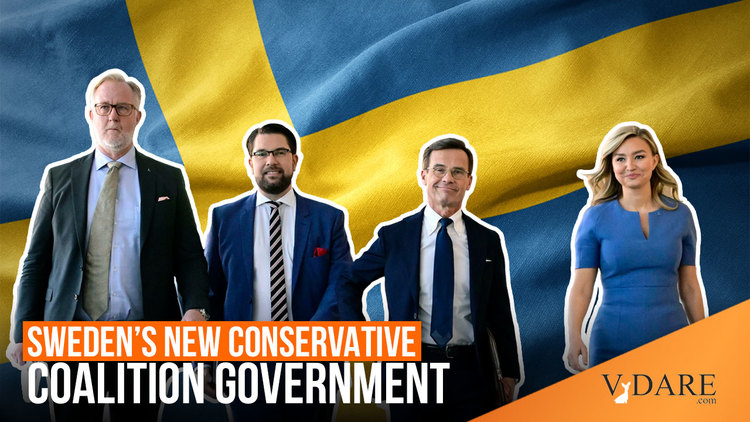 See also by Harri Honkanen: Immigration Patriots Are Breaking Through Sweden’s ”Cordon Sanitaire.” What About America’s?

As of Monday October 17, 2022, there was a new government in Sweden. It is a government of the kind that the Nordic country hasn’t experienced for a very long time. If it’s telling the truth in its “policy agenda,” it aims to actually help the Swedish people—a people who have watched mass Islamic immigration transform their country from one of the safest to the most dangerous country in Europe in just a few decades. An incredible 20 percent of the population of Sweden was foreign-born in 2021 as opposed to just 14.4% in the U.S. (itself a multi-year high). Immigration, in short, has resulted in revolution.

Thus the government is completely reliant on the “far right” Sweden Democrats. This is the first time that Sweden—decades behind its neighbors, on this measure—has formed a government that has included that dreaded “far right.” The result: a series of sensible, reasonable policies to solve the country’s current crime crisis.

The new government was narrowly confirmed by the Riksdag (“Parliament”) on Monday by 176 votes to 173, making the leader of the “Moderates,” sometime gymnast Ulf Kristersson, the new Prime Minister. In parliamentary elections last month, Kristersson’s “Moderates” (mainstream conservatives) took 19% of the vote, under the country’s system of proportional representation, to the Sweden Democrats’ 20.6%. The ruling Social Democrats took 30.5%, but relatively poor results for smaller leftist parties resulted in the “Right Bloc” of parties ending up with a wafer-thin majority. The Sweden Democrats were the only right-wing party to gain support.

The new coalition is composed of the Moderates; the small Christian Democrats (who, in Sweden, unlike in Germany, do have a strong Christian orientation), who took 6%; and the even smaller “Liberals” (meaning economic liberals, free marketers) who garnered just under 5% of the vote. But obviously that is not enough to get any legislation through parliament, so the power behind the throne is the Sweden Democrats, without whose support the government would collapse.

Probably the only way the smaller parties could be induced to be part of the government was if the Sweden Democrats officially were not. The infamous “Cordon Sanitaire” by which Establishment parties have been induced to shun new nationalist parties in Europe may still exist in Sweden, but only technically. And this arrangement also allows the “anti-Establishment” Sweden Democrats to argue that they’re not really part of the government if things go wrong.

However, the Sweden Democrats’ enormous influence over the government was obvious on Monday. The four party leaders sat together for press conferences. As journalist David Mac Dougal commented: “It’s clear that the far-right anti-immigrant Sweden Democrats hold a lot of power. They might not have cabinet minister jobs, but as the biggest party out of the four, they’re outside the government in name only” [From immigration to the environment: Five things we learned about Sweden’s new right-wing government, by David MacDougall, Euronews, October 17, 2022].

According to the agreement signed by the coalition parties, even though the Sweden Democrats have no ministerial positions, they will have exactly the same rights and influence over government policy as do the other coalition partners. And they’ll also be able to place their own political operatives within each ministry in order to check up on what’s going on.

And what will be going on? Well, if the new government is telling the truth, then the country that, in 2015, allowed itself to be overwhelmed by young Muslim men is about to get tough on immigration. Asylum-seekers who turn up in Sweden seeking asylum will only be processed, and allowed to stay temporarily,  if they are from a country “in the vicinity of Sweden.” Family reunification of asylum-seekers will only be approved only after a two-year wait, presumably to encourage bogus asylum-seekers to go home. Asylees who wants to stay in Sweden longer than two years will have to, for example, learn Swedish before they can attain citizenship, though it is not clear how this will be enforced.

But the agreement goes further. Sweden will cut its annual intake of “quota refugees”—EU countries currently share responsibility for refugees that enter its territory—from 5000 to just 900. It will cut its international aid budget by 25% and it aims to introduce border checks even on its borders with EU countries, specifically Denmark and Finland.

Parts of Swedish city centers are now “No Go Zones,” especially at night, due to immigrant criminal gangs. The coalition, therefore, aims to introduce stringent—by Nordic standards—new policies to clamp down on street crime. These include doubling penalties if the criminal is the member of a gang, tougher sentences for rape, criminalizing begging and giving the police stop and search powers in high crime—immigrant—areas, while also providing the police with more funding.

It will also make it a criminal offense to be a gang member and make it possible to deport foreign gang members simply for being in a gang, whether or not they’ve committed a crime.

In addition, according to the agreement, when prisoners are released from jail, new laws will mean that they can be banned from living in the district where they committed the crime for up to ten years, something that will especially apply to “honor crimes” and “gang crimes,” as well as “violence against women” and “violence in intimate relationships,” meaning it in effect targets Muslim men [Tidöavtalet: Överenskommelse för Sverige, 2022].

Again and again, throughout the agreement, you read the term “in Denmark.” Denmark has enacted strict anti-immigration and anti-immigrant crime laws. (Steve Sailer has called them a “World Leader in Restricting Immigration Intelligently.”) If this new Swedish government manages to actually carry out its mandate, then—in theory—life could return to something like normality for the long-suffering Swedish people.

But, of course, in practice, even if immigration is restricted, the non-Swedes are heavily outbreeding the Swedes and gradually taking over more and more parts of the country. On current trends, the Muslim population could be as high as 30% by 2050, more than double its current share, with Europe-based Muslims having, on average 2.6 children, compared to 1.6 for non-Muslims [Muslim population in some EU countries could triple, says report, by Harriet Sherwood, The Guardian, November 29, 2017].

But Euronews’ Mac Dougal reports that the new government has announced that “Regional authorities will also be able to launch their own campaigns to encourage migrants to go back home voluntarily.”

It may need to go a lot further than simply “allowing” regional authorities to encourage repatriation if it wants to solve this looming Great Replacement.