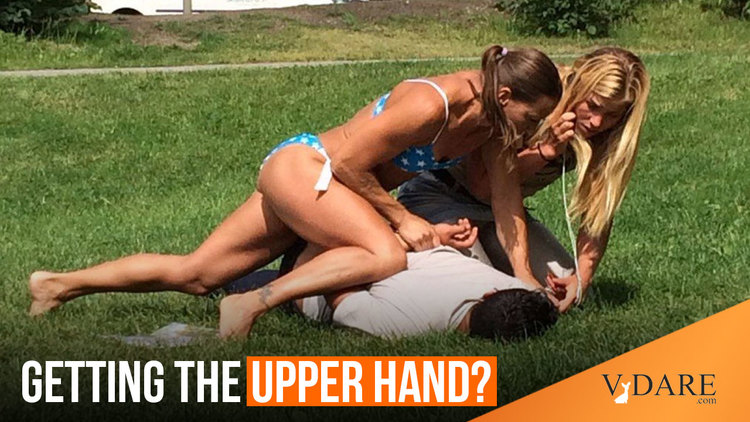 Above, the man being arrested for stealing from sunbathers by an off-duty Swedish cop in a bikini is probably a gypsy.

Could something finally be going right for Sweden? Could one of the most Woke countries in the world, in which a leading bishop urged that crosses be removed from churches so as not to offend immigrants and in which the website of the electoral commission is headed by a large picture of a black man (one of a rotation of four “voter pictures”) have finally had enough?

In the 2018 Swedish Parliamentary Election, the results for the anti-immigration Sweden Democrats were slightly disappointing. They increased their vote share—under a system of Proportional Representation—from 12.8% to 17.6%, but they still came in third, to the mainstream conservative “Moderates” and the victorious Social Democrats, who have come first in every Swedish general election since 1914.

But now their long-awaited breakthrough—after four years of out-of-control gang violence, Africa-like rape rates and muggings in what has been transformed, by Third World immigration, from Europe’s safest to its most dangerous country in just 20 years—may have finally come. Having garnered 20.6% of the vote, the Sweden Democrats are set to be the second largest party in the new Riksdag, the Swedish Parliament, narrowly beating the Moderates, who took 19.1% [Swedish Nationalist Set to Take His Party From Pariah to Power, by Niclas Rolander and Jonas Ekblom, Bloomberg, September 12, 2022]. 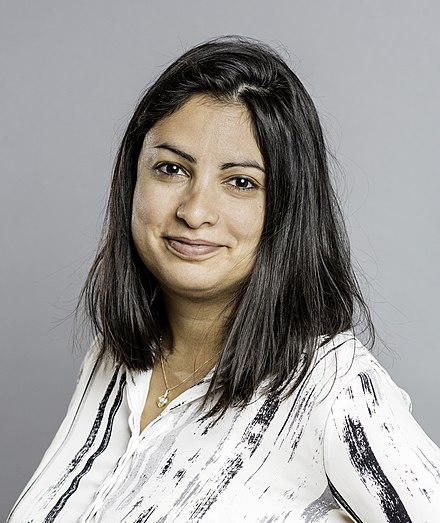 In a sign of the polarization that is occurring across Europe, the Social Democrats—the party of the Prime Minister Magdalena Andersson—have marginally increased their vote, from 28.3%, their lowest ever share of the vote, to 30.5%, while the losers have been the smaller parties—who generally attain a few points over the 4% of the vote necessary to enter the Riksdag—all of whom (with the exception of the Greens, who saw a miniscule rise) have seen their vote share fall. For example, the extreme-left “Left Party,” now led by Swedish-born Iranian child of refugees Nooshi Dadgoster, right, has declined from 8% to 6.7% [Riksdagsval, SVT, September 12, 2022].

But these slight shifts may have dramatic consequences for the balance of power in Sweden.

The Swedish political parties align into two power blocs that become coalition governments: the Left and the Right. After the last election in 2018, in which the left-wing parties just about won, it took the Social Democrats a long time to actually form a coalition with a leader who had the support of enough of the parties in the Riksdag.

The election is currently on a knife-edge, but it appears, with 95% of the vote counted, as though the Right has, just about, triumphed, for the first time since 2014. Based on current estimates the right-wing bloc (if they all worked together) would have 175 seats in the 349 seat Riksdag, giving them a majority of a mere 1 seat.

In theory, Jimmie Åkesson, the 43-year-old head of the Social Democrats, could lead the coalition, but in practice other conservative parties are likely to demand that the leader of the Moderates does so. If this happens, then there will be a shift away from the Social Democrats, the party whose then–Prime Minister Stefan Löfven accepted 163,000 mostly male and Muslim “refugees” into his nation of just 10 million in 2015 alone [Even Sweden Doesn’t Want Migrants Anymore, by James Traub, Foreign Policy, November 17, 2021].

But this overall close result hides some interesting details.

One assumes that the left-wing parties favor high levels of immigration, partly because it boosts their vote share. Immigrants will likely vote for the Social Democrats and the Left so they adopt an immigration policy which permits them to cheat in elections by “Electing A New People.” The problem is that these same parties are strongly Woke with regard to issues such as transsexuality, while most of the immigrants are Muslim and socially conservative. In this incredibly tight election in which, unlike in the U.S., every vote counts equally, votes for parties that don’t reach the 4% cutoff point to enter the Riksdag can have a serious impact. 1.5% of Swedes on Sunday voted for a party that did not attain sufficient support to enter the Riksdag.

This can create anomalies, because of the complexity of Sweden’s system of proportional representation. There are 29 constituencies, representing 310 seats. You need 4% nationwide to get a seat. However, you need 12% to get any of the remaining 39 seats. These “levelling seats” are distributed, mathematically, to try to ensure that the seat number for a party reflects its national vote share. In a knife-edge election, however, any votes for tiny parties can interfere with the allocation of seats, when you consider that if the left bloc took just one more seat it would win the election.

The Social Democrats came first in every constituency bar one, where the Sweden Democrats defeated them. However, there is now a registered fundamentalist Islamist party in Sweden known as Nyans, which means “Nuance.” In some immigrant heavy districts, which frequently witness riots and street crime, this very minor party took more than 20% of the vote.

In the Stockholm district of Rinkeby, in which serious disorder broke out in April when a Danish anti-immigrant politician tried to burn the Koran, this party seemingly took 23% of the vote in the Riksdag election; this percentage voted for an “Other” party, not elected to the Riksdag. In Rosengård, an area of Malmo, “Other” achieved 28% of the vote. Local elections also took place in Sweden on Sunday, and this leads to actual power. In Malmo, the Nuance Party will have two seats on the city council. The party mainly took votes from the Social Democrats [Nyans ser ut att få stöd i flera district, by Johanna Rapp, Aftonbladet, September 13, 2022]. In the Malmo parliamentary constituency, 3.1% voted “Other,” more than double the national average. The precise breakdown “Other” has not yet been revealed.

Another interesting finding is that the Sweden Democrats are the only right-wing party to have made any progress, with all of the other right-wing parties having lost votes. This could imply, though these are only small movements in vote shares, a gradual movement among conservative voters to the so-called “far right” and specifically to the Sweden Democrats. And this is a genuine increase in support. In the 2018 election, some people believed that a more hard line anti-immigration party—Alternative for Sweden—might make it into the Riksdag, but they only picked 0.31% of the vote, so this is not a matter of the Sweden Democrats only doing well because a smaller, breakaway party has fizzled out.

The rise in the vote for the Sweden Democrats has also been replicated in the local elections. They have come second in many so-called “communes” and in some they have come first, sometimes by a significant distance. In the small town of Hörby, in central southern Sweden, they have taken 39.7% of the vote, with the next largest party being the Social Democrats on 17% of the vote. It is a small, rural and overwhelmingly Swedish town and it appears that the people who live there want it to remain that way.

We’ll see what happens in the coming weeks as the Swedish parties engage in their usual process of “horse-trading.” But, on the surface at least, Sweden might be starting to become a slightly less dangerous place to live.