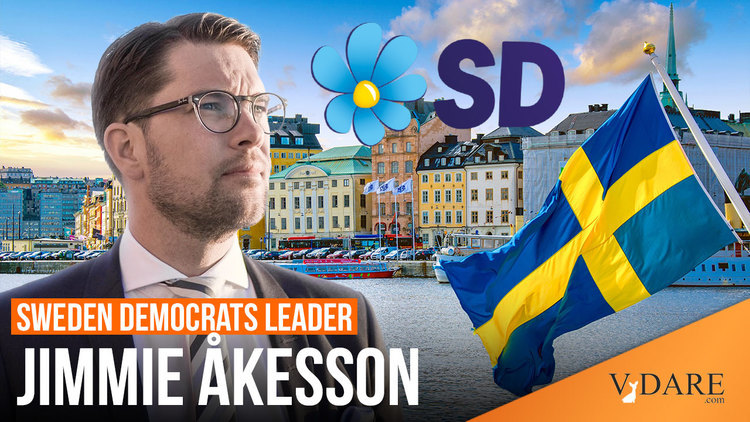 As expected, the Sweden Democrats gained in the most recent election yesterday, capitalizing on fears of crime and mass immigration. The base is also, not surprisingly, made up of workers, the group the GOP seems so eager to shun in this country.

However, the Social Democrats won the most votes in that group (and among civil servants). #valet2022 #Swedenelection #Sweden pic.twitter.com/hvkAJTicGF

This is reportedly the ninth election in a row where the Sweden Democrats have increased their vote share. There is the usual hysteria from the Main Stream Media.

Call me cynical, but I suddenly get suspicious when the nationalists are winning and then the vote counting stops and the experts assure us it will take time to know what’s happening. That said, before you put on the tin foil, exit polls showed a slim leftist victory, so it is very likely that the current governing coalition will be able to eke out a victory fairly. Still, the timing will likely energize the Sweden Democrats. Their strong showing will also legitimize them, as it is hard to smear them as ”neo-fascists” and ”neo-Nazis” when they become the largest party on the right.

Even if the right wins overall, it’s simply too early to know whether the Sweden Democrats will have any kind of power. That depends on the center-right to right-wing winning an overall majority. It will be extremely close either way, which means that some of the more jumpy, or, to put it bluntly, cuckservative parties might get skittish about working with the Sweden Democrats.

The Sweden Democrats are an interesting case study of an ”extreme” party successfully moderating its image and meeting with electoral success. Marine Le Pen is trying to do the same thing with the National Rally. The results have been mixed, at best.

Whether moderation or being a vanguard is the correct path is a broader debate. One could argue that even in the best case, all the Sweden Democrats have been able to do is form a slightly larger voting bloc while the country itself is swamped by mass immigration. There is a time limit here. Changing demographics ultimately make the democratic path to power impossible. Yet if the Sweden Democrats are able to form the next government, their message discipline will be a powerful example for other parties to follow.

The true answer is that both strategies are probably needed, including the differing (and often clashing) personality types that make up each kind of movement. However, the idea that victory will come without at least some progress in the existing constitutional system is delusional. The Sweden Democrats, no matter what happens, have showed that a disciplined, controlled, and relentlessly focused party can grow even in the teeth of media opposition. That’s a win no matter what.