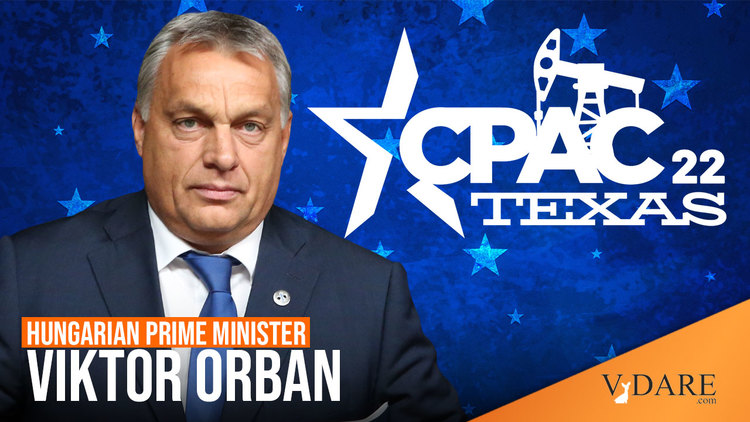 Hungarian Prime Minister Viktor Orbán delivered one of the most powerful speeches of his life recently, and the Leftist Regime Media lost its collective mind. Speaking at a Romanian event, Orbán stressed the importance of race to his version of nationalism, and declared that Hungary must resist becoming a “mixed-race” country. This was no declaration that Hungary is just defined by “ideas” or “culture.” Orbán believes that Hungarians define Hungary, and vows to protect his people from the ravages of globalism. This situation puts his Respectable Right U.S. fans in an awkward position. They want Orbán to be a friendly civic nationalist who simply wants to boost Hungarian birthrates in a non-racist way. But his powerful speech reminds us that nationalism must address race.

Counter-Currents website performed a great service by translating and posting the 9,000-word speech in full, and it’s well worth the read [The West Has Moved to Central Europe, by Viktor Orbán, July 27, 2022].

Orbán warned his audience about the many dangers posed to Western Civilization: the shrinking number of Europeans, the rise in non-European births, and mass migration, which he called “population replacement.” He endorsed Jean Raspail’s Camp of the Saints for showing “the spiritual developments underlying the West’s inability to defend itself.” Immigration has split the West, Orbán says:

One half is a world where European and non-European peoples live together. These countries are no longer nations; they are nothing more than a conglomeration of peoples. I could also say that it is no longer the Western world, but the post-Western world. And around 2050, the laws of mathematics will lead to the final demographic shift: cities in this part of the continent—or that part—will see the proportion of residents of non-European origin rising to over 50% of the total.

And here we are in Central Europe—in the other half of Europe, or of the West. If it were not somewhat confusing, I could say that the West—let’s say the West in its spiritual sense—has moved to Central Europe: The West is here, and what is left over there is merely the post-West.

You would never see an American or Western European politician, with the exception of Eric Zemmour and maybe a few others, dare broach this subject. Few have the guts to point out the obvious: importing non-Westerners changes a nation.

Orbán is also the first head of state ever to endorse Raspail’s dystopian novel—the last copies of which are available at VDARE.com. But the most controversial and racially explicit part of the speech came a few paragraphs later:

In such a multi-ethnic context, there is an ideological feint here that is worth talking about and focusing on. The internationalist Left employs a feint, an ideological ruse: the claim—their claim—that Europe by its very nature is populated by peoples of mixed race. This is a historical and semantic sleight of hand, because it conflates two different things. There is a world in which European peoples are mixed together with those arriving from outside Europe. Now that is a mixed-race world. And there is our world, where people from within Europe mix with one another, move around, work, and relocate. So, for example, in the Carpathian Basin we are not mixed-race: We are simply a mixture of peoples living in our own European homeland. And, given a favorable alignment of stars and a following wind, these peoples merge together in a kind of Hungaro-Pannonian sauce, creating their own new European culture. This is why we have always fought: We are willing to mix with one another, but we do not want to become peoples of mixed race. This is why we fought at Nándorfehérvár [Belgrade], this is why we stopped the Turks at Vienna, and—if I am not mistaken—this is why, in still older times, the French stopped the Arabs at Poitiers.

Shrill hysterics from around the world followed Orbán’s discussion of a “mixed-race world.” The International Auschwitz Committee of Holocaust Survivors demanded consequences. Romania’s foreign minister declared that “racism is a poisonous political invention.” Several European Union officials and members of parliament called for Hungary to be punished. And a Jewish adviser to Orbán resigned and attacked her former boss as a “Nazi” [Hungary’s Viktor Orbán faces outrage after saying Europeans shouldn’t become ‘mixed race,’ by Rick Noack, Washington Post, July 27, 2022].

But also interesting was the reaction of American conservatives. CPAC has refused to disinvite Orbán from its upcoming Texas conference. “Let’s listen to the man speak,” CPAC chairman Matt Schlapp said. “We’ll see what he says. And if people have a disagreement with something he says, they should raise it” [Viktor Orbán Will Still Speak at CPAC Despite ‘Nazi’ Speech Backlash, by Mark Niquette and Jeff Green, Bloomberg, July 26, 2022].

It’s good for CPAC to stand by Orbán, but it is rich because CPAC has, in the past, banned those who said the same things. Now, however, it allows a head of state who endorses the Great Replacement theory, Camp of the Saints, and racial nationalism to give a keynote address. What a difference being in office makes.

Other “conservatives” were not as accepting. Cathy Young, writing at The Bulwark, an ardent Never Trump rag, demanded that conservatives repudiate Orbán’s “white nationalism” [Do American ‘National Conservatives’ Condone Orbán’s White Nationalism?, The Bulwark, July 28, 2022]. Washington Examiner writer James Sweet said American conservatives should have nothing to do with Orbán’s racism:

Racial discrimination should not be a component of a movement’s ideology. Conservatives can, and should, support strong borders without dehumanizing the individuals involved. There are a variety of valid reasons for increasing border security, but the “great replacement” and “race-mixing” are not among them. …

The future of conservatism relies on appealing to communities across the nation, regardless of the race and ethnicity of its citizens. While Orbán’s statements apply to African and Middle Eastern immigrants in Europe, the implications of his rhetoric when applied to the U.S. are clear.

National Review’s Dan McLaughlin was also uncomfortable, but hesitated to condemn Orbán outright. He thinks a different standard must be applied to Hungary than to America:

It is, however, vital for Americans neither to project our own views of race and culture onto Hungary, nor to import a Hungarian sensibility on these matters into our politics and culture. Hungarians have sound historical reasons to see the nation-state of Hungary as inseparable from the Hungarian people, to the point that the nation has no reason for existence if its people cease to be Hungarian in culture, language, and national self-identification. Their reasons are not our reasons, their history is not our history, and their ways are not our ways.

But what is this key difference between Hungary and America? Well, McLaughlin believes America is a “universalist” nation and “anyone could become an American.” In other words, cucking is limited just to America. Hungary can still insist on ethnonationalism.

Nuanced point. Poorer European countries w/ populations under 10 million may maintain their historic identity. However, the US & Western Europe must embrace a multiracial propositional nationalism based on legal immigration, "contributing to society" & getting a passport. pic.twitter.com/PRUraPqHyQ

Surprisingly, the usually cucky Rod Dreher stood up for Orbán. The American Conservative scribe has been instrumental in making Hungary a popular model for the American mainstream Right. Dreher has tried to sugarcoat Orbán for his cucky audience. He downplays the importance of mass migration and demographic replacement to the Hungarian prime minister’s appeal. Instead, Dreher admires Orbán simply because he stands up to “wokeness” and advocates family subsidies [How the American Right Fell in Love With Hungary, by Elisabeth Zerofsky, New York Times, October 19, 2021].

In his first attempt to defend Orbán’s mixed-race comments, Dreher audaciously claimed the Hungarian leader didn’t mean race but instead meant “nationality”! He also insisted Orbán, in referring to Muslims whom he didn’t want in Europe, was not referring to “brown and black people” generally. And mixing of peoples and immigration, he claimed, has been bad for Europeans, but not for Americans. That’s a curious claim considering all the damage the 1965 Immigration Act has done to America [Last Word On Orbán & ‘Mixed Race,’ by Rod Dreher, American Conservative, July 26, 2022].

In a follow-up article, Dreher, like NR’s McLaughlin, insisted that it’s OK for Hungary to be ethnonationalist…but not for America. However, he did dare to skewer anti-Orbán neocons in his squishy defense:

Over at The Bulwark, Cathy Young lays into me and other supporters of Orbán (but mostly me) for supposedly favoring “ethnonationalism.“ Bill Kristol tweets his agreement. This is curious, and not just because I reject the idea that the United States is or should be ethnonationalist. It’s because both Young and Kristol are Jewish, and supporters of the State of Israel and its right to exist, as am I. In what sense, then, are they not in favor of ethnonationalism? Is it only okay to think of your people as belonging to a nation that has a right to exist on its own terms if you‘re Jewish, but not if you are Magyar?

That’s a very good question—and one likely to land Dreher in hot water. Shockingly, he hasn’t apologized for asking the obvious. Maybe Orbán is rubbing off on him after all.

For his part, Orbán insisted his comments weren’t racial. “It happens sometimes that I say something in a way that can be misunderstood but…the position I stand for, is a cultural, civilization [based] stance,” he said at a press conference alongside Austrian Chancellor Karl Nehammer. The Austrian leader seemed to accept Orbán’s explanation [Hungary‘s Orbán says his anti-immigration stance not rooted in racism after backlash, by Krisztina Than, Reuters, July 28, 2022].

That explanation was meant to appease foreign audiences. His real message was found in the speech delivered in Hungarian. And that’s the message American immigration patriots must hear.

We’re not civic nationalists. We don’t think Indian immigrants can easily join the Historic American Nation simply because they’re entrepreneurial or can speak English. We want to preserve the people who actually made this country and ensure they remain the majority.

Of course this puts American cuckservatives in an awkward position vis-à-vis Orbán. They want to pretend race isn’t real and Orbán is a mere civic nationalist. But his speech undercuts those assumptions. And instead of shunning him, Conservatism Incers invited Orbán to deliver a keynote address at the next CPAC and have not (yet) disinvited him.

That’s a big change for the Beltway Right. Ethnonationalism is apparently now acceptable—so long as it’s from Eastern Europe.

Prediction: It won’t be long before the American Conservative Establishment is forced to retreat and accept ethnonationalism in their own country.