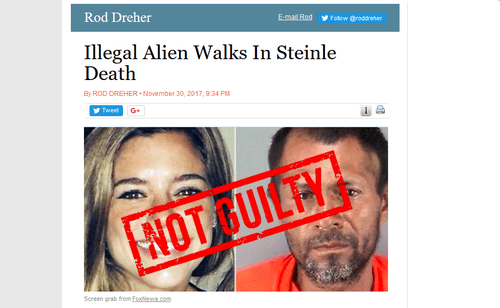 Re: Hubert Collins' post "Will Rod Dreher Ever Get Purged?"

From: An American identitarian [Email him]

I read with interest Hubert Collins' VDARE blog post on Rod Dreher. I too have been closely following Mr. Dreher's titanic struggles with his inner identitarian. It came to a head when in the pages of The American Conservative he bitterly excoriated TAC's founder Pat Buchanan for his "shameful defense of white supremacy".  He called Pat's position on Confederate statues "disgusting and racist". Now my first thought was “Hadn't he ever noticed over the years that Mr. Buchanan has always had a bit of a soft spot for whitey?” And my second thought was that the man protested too much. But what really tipped me off was when the verdict in the Kate Steinle case came down and Mr. Dreher wrote:

But Donald Trump is not going to say nothing about this. Any other president would talk about respecting the rule of law and the legal process, even when we get an unjust verdict. Not this one. And I’m not 100 percent convinced I want him to say the proper thing. [Illegal Alien Walks In Steinle Death, TAC, November 30, 2017]

What he was saying here is that what he deems a dark part of himself wanted Trump to go full gorilla on it. And here's the thing: in large part what identitarians hate Mr. Dreher hates. And things are only going to get worse. And one day he's going to hear of some fresh outrage perpetrated on America by the left's alien ideology and he's going to tweet out: “Wake up white people!” I just hope no one manages to get a screenshot of it before his inner Christian Humanist gets him to delete it. I'd hate to see him get purged.