Cathy Young Proves the Point—Immigration Patriotism Is Good for America. That’s Why She Hates It

Cathy Young has a new piece kvetching about Ann Coulter, VDARE.com, and the American Right [Ann Coulter’s Anti-Semitism Runs Deeper Than You Know, The Daily Beast, May 10, 2016]. But rather than rebutting immigration patriots, it almost seems like Young is trying to make our points for us. Perhaps the Alt Right really does have some deep-cover mole operation no one told us about.

Young’s ostensible purpose is to Point-And-Splutter at the great Ann Coulter. She whines that Coulter retweeted something from our Twitter account (@vdare) in which we observed the Alt Right isn’t just attacking Conservatism Inc. from outside, but is present inside many of these institutions, especially among younger staffers. (The trolling is coming from inside the building!)

Young does nothing to rebut her widespread reputation as a dinosaur when she wails that people shouldn’t be allowed to retweet things which make her feel sad. If this is what passes for the American Right, no wonder the “conservative movement” failed so completely in its stated goals.

But this isn’t Young’s main point. She hurls the career-lethal charge of anti-Semitism against Coulter. What is evidence for this damning indictment? An “anti-Semitic trope” that became a “Twitter meme” featuring a quote Young sources from Coulter’s best-seller Adios America! 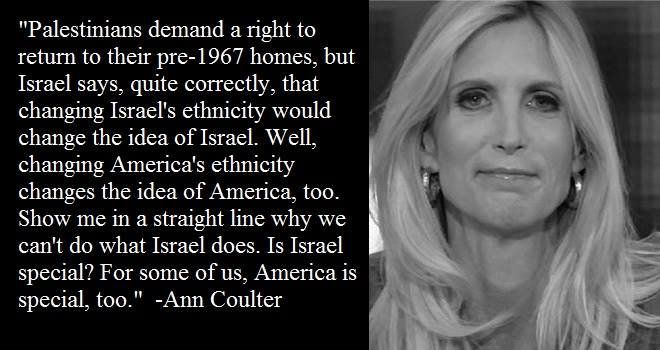 So… what’s the problem?

Obviously, there’s nothing in Coulter’s comment that’s “anti-Semitic” or anti-Israel. Indeed, if anything, it’s philo-Semitic, in that it uses Israel as an example to be followed.

But Young says this comment is indeed anti-Semitic because:

…those familiar with the alt-right will recognize one of its favorite talking points: Israel supporters—particularly Jews—are hypocritical if they support immigration into the U.S., since they don’t advocate large-scale non-Jewish immigration into Israel or the Palestinian right of return.

Whatever Young calls it, that’s practically the definition of hypocrisy. But, as if to prove the point, Young then proceeds to explain why America is not allowed to oppose large-scale immigration into the United States, but Israel is.

Her arguments are so sloppy and self-interested, one can’t help but suspect Young knows she is arguing in bad faith. And here we have to mention what Young herself mysteriously refuses to acknowledge—Young is herself a Russian Jewish immigrant.

Do you think this might affect her views on the subject? Shouldn’t it at least have been mentioned?

Let’s take these one at a time.

Was the United States always a “Proposition Nation” defined by a vague set of supposedly universal values?

Absolutely not—all of the Founding Fathers were undoubtedly “racist” by today’s standards and could fairly be called “white nationalists.” Alexander Hamilton argued even an influx of European immigrants would “tend to produce a heterogeneous compound; to change and corrupt the national spirit; to complicate and confound public opinion; to introduce foreign propensities” [What the Founders Really Thought About Race, by Jared Taylor, National Policy Institute, January 17, 2012]. According to John Jay in Federalist No. 2: Americans were “one united people, a people descended from the same ancestors, speaking the same language, professing the same religion, attached to the same principles of government, very similar in their manners and customs." According to the Naturalization Act of 1790, only a “free white person” could be naturalized.

As Sam Francis once noted:

The Founders had no problem whatsoever in understanding and recognizing that America does indeed have a specific ethnic and cultural foundation and that when that foundation vanishes, the American republic disappears with it.

What about hostile neighbors? Mexico can hardly be regarded as a friend. Almost 10 years ago, the Department of Justice reported Mexican drug cartels operated in 230 American cities, a figure that’s likely to have increased. Violence from Mexico’s drug war continues to spill over into American territory. The Mexican government continues to meddle in our domestic affairs, encourage American citizens of Mexican descent to remain loyal to Mexico, and even nurses revanchist sentiments against U.S. territory. What kind of a friend is that?

And even if Mexico were a friendly country, does that mean immigration should be completely uncontrolled? After all, just because Canada lies to our north doesn’t mean we should completely dissolve our border. A country has the right to protect its sovereignty.

What’s more, in an age of international terrorism, even a “friendly” country can serve as a host for not-so-friendly elements, requiring careful controls of population flow to prevent disaster.

Assume, by some miracle, peace does come to the Middle East. If the neighboring regimes were suddenly “friendly,” would it benefit Israel to admit unlimited immigrants from these nations? Mass immigration from “friendly” Arabs would doom the Jewish state more surely than the most fanatical jihad.

One suspects Young knows this, and, as is surely understandable, wants to avoid it. What reason, other than malevolence, does she have to deny this to America?

Finally, there’s the question of scale. Young says that Israel, being a small country, has to be more careful about immigration.

But as Vox Day points out:

The US population was 194 million in 1965. The 61 million immigrants who have entered the country since would be identical to permitting 2.5 million Palestinians to return to Israel. Is Cathy Young willing to permit just 2.5 million Palestinians to return? If that many, proportionately, would be bad for Israel, how can she argue the same is good for the USA?

Besides, it’s not just “large” countries who are being told by Cathy Young clones that they need immigration. From Denmark to Switzerland, even tiny nations are being told they have a kind of moral responsibility to accept immigration—even if it means their national extirpation.

Young frantically signals about “bigoted,” “nefarious,” and “deranged” theories of a Jewish conspiracy, complaining about the writings of Kevin MacDonald. But it’s almost like she’s trying to fit into the blatantly hypocritical model of activism he decries, daring all of us to notice it and call it out. For, of course, “Noticing” is not allowed.

Of course it’s blatant hypocrisy to say Israel can protect its borders but America can’t. Of course it’s sheer malevolence to acknowledge restricting immigration it is good for the country you care about (Israel) and work to force it on the country you despise (America). Of course Young is possessed by a kind of ethnocentric lunacy surpassing even the most fevered examples to be found anywhere on the Alt Right.

But what’s most absurd about Young’s polemic: its ostensible purpose is to hurt Ann Coulter. Yet in the end, Young admits that nothing Coulter says is “directed at the Jews.” But, using some kind of mind reading device unavailable to the rest of us, Young declares “the implications of her taunt are unmistakable.”

But they aren’t. At least not until Cathy Young (email her) spelled it out for us by revealing the hatred that appears to animate her entire existence.