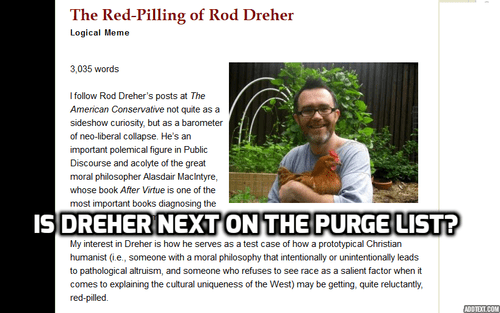 Will Rod Dreher Ever Get Purged?

The knives are out for Rod Dreher, The American Conservative’s (TAC) prolific Orthodox Christian blogger. Cultural Marxism does demand regular sacrifices, after all. Nathan Doyle noted a few of the prominent leftists keeping tabs on Mr. Dreher, but with due respect, only the tip of the iceberg was scraped.

Let he who has ears to hear, hear: Rod Dreher's racial politics are very, very bad and they have been for a long time. https://t.co/RZfGbF0nuM

Camp of the Saints literally depicts white genocide at the hands of evil immigrants. Dreher thinks it raised some good points. That should trouble anyone with a conscience.

Below is an excerpt from Rod Dreher, a Christian and author of “The Benedict Option: A Strategy for Christians in a Post-Christian Nation.” It is now even clearer why Dreher sees separation as the best option.
https://t.co/N2MKUZn5Wv pic.twitter.com/HKpo0tVZPQ

New premium ep is up: David French and Rod Dreher back in force

But there is plenty more.

http://bit.ly/qELct0 Is Rod Dreher suggesting that he can't teach his boys not to sexually assault women when women are so sexy?

@jbouie But Dreher is clearly invested in the idea that all equality movements were fundamentally evil.

Hannah Gais, a regular at The Baffler:

dreher is so close to being a fully radicalized far-righter publicly; he just refuses to admit it

has anyone written the rod dreher is on the way to being a white nationalist yet? because I will do that

Noah  Berlatsky, exemplar of the Jewish tendency to gate-keep:

Rod Dreher wants you to know that you're discriminating against him if you shun him because he's full of hate.

It's the same thing he's wanted you to know in every other article he's written. W/o bigotry, his whole written persona would dissipate into ether. https://t.co/Cc1B84Qhng

Rod Dreher was nattering on endlessly yesterday about how gay marriage is a "cosmic" shift, and Catholicism can't survive without bigotry. Again, bigoted nonsense doesn't deserve to be seriously debated.

Rod Dreher should take the Benedict option and crawl into a cave, never to trouble us more.

With so many prominent media voices deeming him beyond the pale, it is the to the immense credit of TAC for sticking with him. But just because they have, does not mean they will. One cannot help but wonder what Mr. Dreher’s fate will be if the heat is ever turned up considerably. For example, what if the Southern Poverty Law Center turned its sights on him? What if examples of his supposed bigotry make it on a segment of national television? That happened to Katie McHugh, who was eventually fired by her long-time employer Breitbart.com.

TAC is, on the whole, a worthwhile and brave publication. But they are also clearly hungry for more mainstream acceptability, and that does lead them to make cowardly decisions every now and again. Last October, the magazine severed all ties with Phil Giraldi after his article for Unz, “America’s Jews are Driving America’s Wars,” went viral. On top of that, Mr. Dreher does grapple with tough questions about race and society honestly, and this may one day push him into verboten conclusion. [The Redpilling of Rod Dreher, by Logical Meme, Counter Currents, September 15, 2017]

And if you are reading this, Mr. Dreher, remember what another wise Southern Christian once said, “The truth does not change according to our ability to stomach it.”