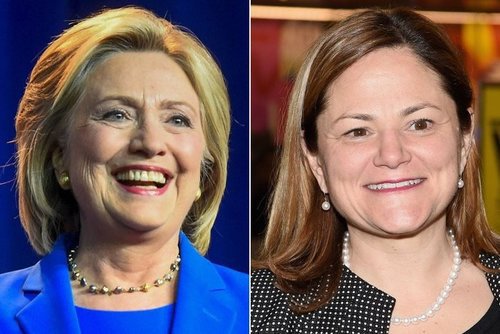 "Refugees" Are Breaking Into Europe In Search Of...White Supremacy!

Why? Well, see, Hillary Clinton was just in Puerto Rico campaigning. Mrs. Clinton has made it known that she supports Puerto Rico's desire to declare bankruptcy and restructure its debt. Ms. Mark-Viverito likes that. So she's endorsed Hillary.

Now, Melissa Mark-Viverito [Email her] is Puerto-Rico-born, and is a communist gringo-hating Latino troublemaker from Central Casting—a fan of Castro, the Sandinistas, and so on. [Melissa Mark-Viverito wears shirt supporting terrorist, By Kathleen Culliton and Beckie Strum, NYPost, June 15, 2015] 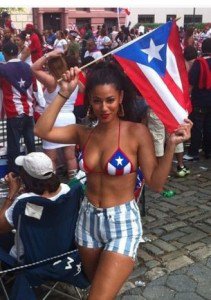 Forty years ago this lady would have been ardent for Puerto Rican independence. Now, though, in 2015, her ardor is all directed to … Puerto Rico having its debts forgiven by the gringo politicians and bankers.

I mention this tiny local news item because it's a small illustration of a large truth about the world this past few decades.

When the age of Imperialism came to an end in the 1950s, it was reasonable to expect that the Third World nations, newly independent, would soon get themselves up to European standards of modernity and prosperity.

Some did. Singapore today has a higher standard of living than Europe. South Korea and Taiwan, formerly colonies of Japan, have both done well. Even India hasn't done too badly. One or two of the Caribbean nations are at least livable, if you don't mind high crime rates.[ Crime and Safety in Barbados, By Robert Curley, GoCaribbean.About.com].

But most ex-colonial nations have floundered. Even when they've avoided war and political turmoil, their people have remained poor. ,

If you were living in, say, Sierra Leone, or, say, Pakistan, or, say, Laos fifty years ago, hope was reasonable. Your nation had control of its own destiny at last. Onward and upward! Work hard, perform your civic duties, and watch your kids climb into prosperous modernity.

That hope is not reasonable today. If today you live in Sierra Leone or Pakistan or Laos and you want your kids to enjoy a good life, the sensible thing is to get the hell out of there. Find some way to get into Europe, or North America, Australia, or New Zealand.

If you hope for your kids to live well, you want them living under white supremacy—in a country built by and governed by whites, preferably by northwest Europeans, most preferably by the British.

And that's exactly what people are doing. Everyone's dream worldwide is to live in a country built by and governed by northwest-European whites. You can curl your lip all you like when you say "white supremacy," but the truth is, white supremacy's awfully popular with the wretched of the earth.

You even see something similar within the borders of the U.S.A. Remember Black Separatism? It was alive and well as late as the 1980s. Louis Farrakhan urged American blacks to start their own companies, build their own factories, stop depending on the white man for stuff. [THE KEY TO SUCCESS? Do for Self, by Louis Farrakhan, Final Call, Vol 1. No. 4]

Independence! Self-support! Turn your back on the white devil and his works—look to your black brothers and sisters!

That didn't work out any better than independence for European colonies did. Black Americans today are more dependent on whites than ever.

Black American revolutionary Stokely Carmichael settled in the West African nation of Guinea in 1968 and lived there until he died thirty years later. Can you imagine a black American leader doing that nowadays? Jesse? Al? Ta-Nehisi? It's unthinkable.

Why uproot yourself and move to some trashcan country when you can live in ease and luxury milking white guilt right here in the U.S.A.? Why go to the trouble of building your own factory, when Whitey will build one for you, if you scare him enough and guilt-trip him enough?

This decades-long trend I'm describing is despair—the death of hope. But there's also a sort of cynical throwing-up of hands, saying something like: "Ah, screw it, my people are never going to make any decent showing by ourselves. Let's settle for living off the white man's bounty."

They've tried independence and self-support, and it didn't work out. So, live off the white man's benevolence. If you don't have the good fortune to live in a white country, just break into one.

That's been happening in the U.S. since the disastrous 1965 Immigration Act. It’s what's happening in Europe now.