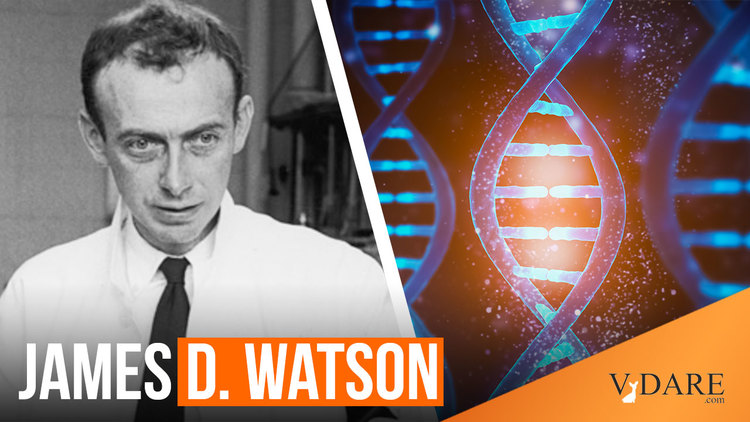 Reflecting On James D. Watson: Why The Truth, Even About About IQ Differences, Will Indeed Set Us Free

The ritual humiliation of America's most prominent man of science,  James Watson, for publicly acknowledging that there are differences in average intelligence among the races, highlights the extent to which today's conventional wisdom is hysterically hostile to basic findings of the human sciences.

(Here, from the Gene Expression blog, is Jason Malloy's comprehensive exposition of the present state of scientific understanding concerning IQ and race. Bottom line: "Everything Watson got in trouble for saying was entirely correct!")

But perhaps we don't need to deal with all the facts. Maybe we can safely ignore the most unpopular ones.

Really, wouldn't it be better if everybody just shut up about IQ?

For example, David Vallejo, who says he's Hispanic and a frequent VDARE.com reader, asks about public discussion of IQ and ethnicity:

"Assuming that Sailer is correct … what good is it going to do to non-whites?"

Mr. Vallejo is specifically concerned that:

"Don't you think that making generalizations about the level of intelligence of Hispanics (or other races) as being lower than that of whites is detrimental for those of us who are actually more intelligent than the average white person?"

These intelligent minorities are not trivial numbers of people. Somewhere around eleven million Hispanics and seven million African-Americans have higher IQs than the average white American. (Of course, you won't see estimates like this from those vilifying Dr. Watson—just from those of us who study IQ research seriously.)

Still, sizable majorities of blacks and Hispanics do fall beneath the white (and Asian) IQ average.

And it's often assumed that, if evil folks like Dr. Watson and myself weren't around to spill the beans, nobody would ever notice with their lying eyes that these racial differences exist.

In reality, American homebuyers (most of whom, I'm sorry to say, are not VDARE.com readers) are obsessively interested in the ethnic make-up of local public schools. Without my help, they appear to accept the "stereotype" that white and Asian students will provide a more studious peer group for their children than blacks and Latinos.

Thus, houses in districts with mostly white and Asian students often sell for tens or even hundreds of thousands of dollars more than in districts populated mostly by black and Hispanic students.

Moreover, many middle class parents are obsessed with getting their children into exclusive gifted and magnet public schools. For example, the liberal Los Angeles Times runs an advice column by performance artist Sandra Tsing Loh called "Ask a Magnet Yenta" that's entirely devoted to advising upper middle class subscribers living in the huge Los Angeles Unified School District catchment basin how to maneuver their children into elite public school programs. (The application process for the desirable LA schools is so convoluted that it weeds out lowbrow and unmotivated parents.)

Loh acidly notes that when her "Prius-driving screenwriter friend" talks about "diversity" in a school, what he really means is:

So, even though any MSM mention of average racial IQ differences is ferociously punished, as demonstrated yet again the forced retirement of Dr. Watson, home prices nevertheless show that the average American has somehow come to a rough but reasonably accurate understanding of the statistical realities.

How did he ever learn this without reading it in the newspaper? Apparently, as Yogi Berra once said, "You can observe a lot just by watching."

Mr. Vallejo writes that his son is in a gifted class:

"Yet I am quite sure I am not stupid. I have two engineering master's degrees and have always been a straight A student. Neither is my son. His IQ is above 140 and he's in the gifted-student program in his school, so he's for sure not stupid."

But how did his son get into a gifted-student program? Perhaps scoring above 140 on an IQ test had something to do with it?

I might also surmise that Mr. Vallejo's Graduate Record Exam scores helped him get into advanced engineering programs.

As the Vallejos' own experience shows, for high-IQ Hispanics and blacks, IQ-type tests are less the problem than the solution to negative stereotypes.

And this gives us a glimpse of the heart of a little-discussed dilemma: Americans demand what John Milton scorned as "flattery and fustian" in our public discourse about intelligence, while practicing a gimlet-eyed obsession with smarts in our private affairs.

In turn, that explains much about modern America. We have a private sector that is extremely productive—in part because individuals are often allowed to quietly make politically incorrect decisions, such as, oh, getting your son away from normal public school students and in with other high IQ students in a gifted program.

The vast wealth generated by our private sector allows us to get by with a notoriously dysfunctional public sector. One major reason our public schools, say, are so ineffective is that nonsensical thinking about human beings is encouraged to run amok, while truth is silenced.

For example, in a sensible world, we'd evaluate public school principals by their "value added." We'd measure the IQs of incoming students and then track the children's relative changes in performance over the years, rewarding the school administrations that did the best with what they had to work with.

Instead, the No Child Left Behind law put together by President Bush and Senator Kennedy mandates that by 2014 all public school students test as "proficient" (i.e., above average). The only way this can be achieved is through gargantuan fraud by the state testing authorities.

It's crucial to understand that the insanity of NCLB is a consequence of the same hysterical horror of openly admitting that there are racial gaps in average IQ that brought down Dr. Watson. George W. Bush orated in 1999:

"Some say it is unfair to hold disadvantaged children to rigorous standards. I say it is discrimination to require anything less–the soft bigotry of low expectations. Some say that schools can't be expected to teach, because there are too many broken families, too many immigrants, too much diversity. I say that pigment and poverty need not determine performance."[No Child Left Behind - Part II, By Governor George W. Bush CNS Information Services, September 02, 1999]

As a result, America has wasted years on a utopian scheme based on politically-correct dogma that could have been spent making feasible incremental improvements in school performance.

The near-universal hypocrisy in what Americans do versus what they say about schooling is not an isolated example. Instead, it reflects the currently widespread assumption that there should be two completely divorced realms of thought:

This bifurcated mental model is strikingly similar to the conceptual map Renaissance natural philosophers, such as Galileo, inherited from the Ancient Greeks. According to Aristotle's still-dominant cosmology, there was a fundamental divide between the grubby "sublunary sphere" where we humans dwelled, and the higher celestial realm—where, by definition, perfection reigned.

The sun and the planets revolved around the Earth embedded in crystalline spheres, the circle being the most ideal of all shapes. To make the observed data fit the presumption of circularity, the Alexandrine astronomer Ptolemy elaborated a baffling system of "epicycles," with smaller spheres embedded within larger spheres.

The Ptolemaic system is strangely reminiscent of the various Rube Goldbergian explanations popular today to explain away the racial test score gap.

One example: Claude Steele's theory of "Stereotype Threat." Steele hypothesizes that stereotypes make minorities so scared of scoring badly on tests that their discomfort makes them score exactly as badly as the stereotype predicted they would! It's almost as unfalsifiable a theory as Ptolemy's was for 1500 years.

In the conventional wisdom of 1600, the moon, like all heavenly bodies, had to be a perfect sphere.

"The dark spots on the moon that been visible to man throughout the ages were explained away as parts of the moon that absorbed and emitted light differently than other parts — the surface itself was perfectly smooth." [Galileo's Moon—Then and Now (Rice University)]

When Galileo pointed his new telescope at the moon in 1609, however, he observed changing shadows that could only be cast by mountains. He announced:

"The Moon certainly does not possess a smooth and polished surface, but one rough and uneven, and just like the face of the Earth itself, is everywhere full of vast protuberances, deep chasms, and sinuosities."

This, and much other new evidence discovered with his telescope, caused Galileo to doubt that the celestial and sublunary spheres were fundamentally different. Adopting the heliocentric theory of the solar system, Galileo began to develop a theory of mechanics that, unlike Aristotle's, would work for both the heavens and the earth.

At first, Galileo was the toast of Italy, long the most intellectually sophisticated land in Europe, and a friend of the Pope. Gradually, though, the political and ideological climate changed. In 1633, the Inquisition forced Galileo to recant his belief that the Earth went around the sun. ("And yet it moves," he was later reported to have muttered in defiance.)

Perhaps heliocentrism had seemed to the Inquisition to be an esoteric issue of little practical importance—just as many now assume that IQ is a trivial matter that can be shouted down with little risk to the advancement of other sciences.

Yet, the cost to Italian science of the Galileo affair proved immense. The English poet John Milton visited Galileo in Arcetri where the now-blind astronomer was confined. Six years later, Milton wrote in Areopagitica, his defense of a free market in ideas:

"That this was it which had damped the glory of Italian wits; that nothing had been there written now these many years but flattery and fustian. There it was that I found and visited the famous Galileo, grown old, a prisoner to the Inquisition, for thinking in astronomy otherwise than the Franciscan and Dominican licensers thought."

Maybe Milton exaggerated the speed of the downfall of Italian science. But he got the trend right. According to the database Charles Murray sent me of the 4002 eminent artists and scientists he compiled from authoritative reference books for his 2003 book Human Accomplishment, from 1000 AD to Galileo's arrest in 1632, Italy furnished 34.7% of the world's scientific eminence. From then up through 1950 (the end of Murray's database), Italy only accounted for 3.46%.

The transition of intellectual leadership from Southern to Northern European is famously symbolized by the year 1642, when Galileo died under house arrest in Italy, while Newton, who would explain "the system of the world" in 1687, was born in England.

The underlying trouble with forbidding discussion of any single element of scientific knowledge, whether the movement of the Earth or the distribution of intelligence, is that all truths are connected. Lies, ignorance, and wishful thinking are dead ends. But if you follow one truth far enough, it will eventually lead you to others.

That's why the impact of the censorship of any one scientific fact is as unpredictable, and as potentially immobilizing, as removing one part from your automobile's engine.

The symptomatic destruction of the careers of Dr. Watson and Dr. Summers could prove as deleterious in the long term as the trial of Galileo.

And that, despite the risk of hurting innocent feelings, is why we at VDARE.COM are compelled to speak up for truth.