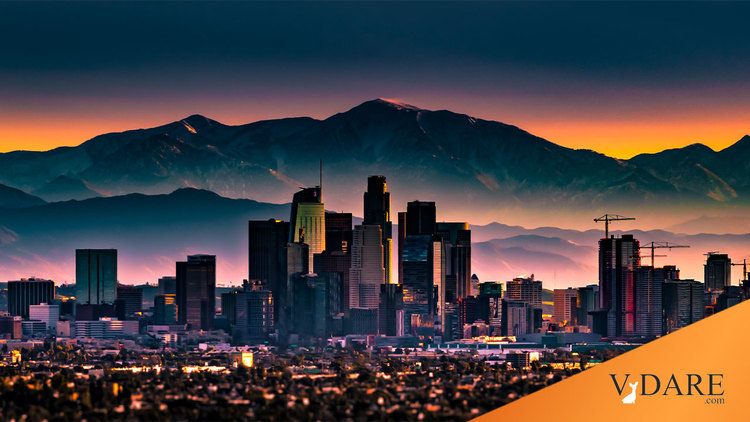 In the not too distant future, business school students will study the collapse of the once-redoubtable Los Angeles Times.

The LAT's downfall is without precedent.

Although U.S. business history has been witness to plenty of staggering failures, never before has there been a case when a company has knowingly and eagerly played a pro-active role in its own rapid decline.

Rarely a day goes by when the LAT does not publish an editorial, Op-ed or an editorial thinly disguised as a news story that either promotes more illegal immigration or encourages more federal and state    programs that provide comfort to illegal aliens.

As more illegal immigrants come to Los Angeles—to the delight, it appears, of the LAT—more native Californians flee the city.

(If you want to know how bad it is in Los Angeles, read VDARE.COM's Edwin S. Rubenstein, "Why Immigrants in Los Angeles (AND THEIR U.S. BORN CHILDREN) Can't Read" A staggering 53% of the city's population is functionally illiterate.)

But judging from the LAT's daily coverage, one must assume that, rooting on the sidelines, it applauds its own demise.

And worth noting is that the LAT's ruination is accelerated by the fact that English speakers who can't get out of Los Angeles are so disgusted with its biased coverage of illegal immigration that many have canceled their subscriptions.

The Los Angeles Times is a mess. As one employee told me: "Morale is in the pits. We are constantly working under the threat of lay-offs. Times management can't seem to decide which way to go."

One recent administrative change: the firing of editorial page editor Michael Kinsley and the promotion of Mexican-born Andres Martinez to replace him.

LAT watchers expect Martinez to push a left wing, pro-open borders policy. But does he have to taunt readers who don't agree with him?

Martinez's none too gracious message to LAT readers:

"If the sound of foreign languages and cultural diversity makes you so twitchy, maybe California is not the place for you." [Vdare.com note: At least he didn't have her arrested!]

Shrewd move, Andres…encourage the few remaining English speakers (and, one presumes, LAT readers) to get out of town. (E-mail Andres Martinez).)

"the strong support of both business and immigrant advocacy groups"

The piece was an arrogant rehashing of immigration enthusiasts' propaganda. And, of course, it included the obligatory cheap shots at Congressman Tom Tancredo [Immigration Reform, Again", Los Angeles Times, September 22, 2005.]

So familiar is this editorial—give or take a word or two, it has appeared in dozens of newspapers across the country—that I suspect it must stem from talking points originally written by the Mexican American Legal Defense and Education Foundation or lobbyists of like mind and sent around to editorial boards nationwide.

See, for example, "A Legacy in Immigration", New York Times, September 26, 2005, for a recent example of suspicious similarity.

Remember that we at VDARE.COM caught the MSM at this game in December, 2002 when it was publishing identical Op-eds in support of the matricula consular card.

Wrapping up the day's dose of LAT insults on 22 September was the worst columnist on its staff and winner of the second annual "VDARE.COM Worst Immigration Coverage" award, Michael Hiltzek. (e-mail him).

Here is what Hiltzek has to say about people like you and me who favor a sensible immigration policy. We are "prejudiced and ignorant".

What Hiltzek demands – literally—that we do: instead of "celebrating the Minutemen" and trying "to bar illegal immigrants from public hospitals and schools and deprive them of government services," we should support AgJobs—an amnesty and guest worker program all rolled into one! [Border Policy Is Pinching Farmers, Michael Hiltzek, September 25, 2005]

All right, already! We understand that the Los Angeles Times is a super-liberal paper.

And we know all too sadly that regarding illegal immigration, the LAT cannot and will not ever write a harsh (i.e., truthful) word.

But does the newspaper have to be so arrogant and obnoxious? If it expects people to pay good money for its product, as I presume it does, then I recommend better manners.

The reality is that the LAT cannot give its lousy rag away. A weekly subscription in the metropolitan area is $2.65; the retail price for the massive Sunday edition is $1.50. Even at those chump change prices, takers are few.

Print media is dead. The Los Angeles Times is dead along with it.

When historians look back over the spoils, note will be taken that the contempt that the Los Angeles Times demonstrated towards its readers—especially on matters of vital concern to the community like illegal immigration—accelerated its descent into nothingness.

As the old saying goes, good riddance to bad rubbish.