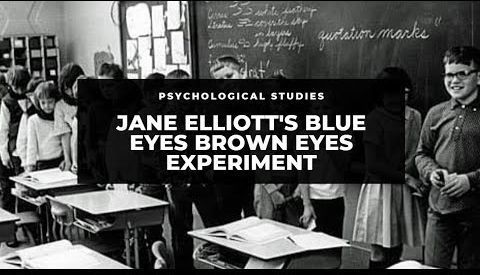 I last wrote about Jane Elliott in March of 2002, but she's still going strong.

Jane Elliott is the ex-schoolteacher who, in 1968, tried the experiment of dividing her all-white third-grade class into blue-eyed and brown-eyed children, and subjected the blue-eyed kids to discrimination, so that they could learn about racism.

She now travels around the world giving seminars in which she does the same thing to adults who are sent for diversity education by their employers.

When a reader recently wrote in and asked what she was up to, I checked and found that she'd had a massive PBS special, your tax dollars at work, and that you can actually watch the show online, (media page, transcript) and have the pleasure of watching her verbally abusing "white folks."

If you want to know what she thinks of white people, American society, and the progress in race relations that has taken place in the last 35 years, you can read the web exclusive interview she gave PBS on December 19, 2002.

When asked why she continues with her crusade in spite of all the things that have changed since 1968, she has a laundry list of grievances, most of which are false:

An Unfinished Crusade - An Interview With Jane Elliot

Invariably, when I do a presentation anywhere in this country, the issue of affirmative action comes up. People say that white males are the ones who are being discriminated against in this country today. So I say, "Fine. OK. Will every white person in this room who would like to spend the rest of his or her life being treated, discussed, and looked upon as we treat, discuss, and look upon people of color, generally speaking, in this society, please stand?"

I think white people aren't aware that racism isn't just wearing white hoods and burning crosses. It's also fixing the system so that black votes don't get counted. [When black votes were less likely to be counted in Florida 2000, it was because of a higher rate of voter errors in black precincts.] It's refusing to open the polling places in precincts where most of the eligible voters are people of color. It's outlawing affirmative action at the state level even though it has proven successful. [Successful for whom?]

It's building more prisons than we build schools and guaranteeing that they will be filled by targeting young men of color with things like the "three strikes" legislation in California, and the DWB — "driving while black." [While there may be something to the idea that police are more suspicious of a young black driver, Heather Macdonald has shown that black motorists are stopped more or less in proportion to their tendency to speed.] These are problems encountered by young black men all over this country. It's the fact that there are more children attending segregated schools [None of which are segregated by law; all this means is that children are going to school with their neighbors.] in the U.S. today than there were previous to Brown vs. Board of Education.

It's white flight [Caused by a completely legitimate fear of crime.] and red-lining by financial institutions. It's television programming that portrays people of color as villains and white people as their victims. [The only TV programming that consistently portrays black crime and white victims is the local news. In Hollywoodland, the people who are demonized are white men wearing suits and ties, usually played by John Vernon.] It's ballot-security systems, which are used to intimidate minority voters [This claim, based on the theory that minorities are less likely have driver's licenses, ignores the fact that minorities are more likely to commit vote fraud, partly because they're Democrats.] and so result in the very activities which they are supposedly designed to prevent.

She's decrying as racist things that are not racist, and refusing to recognize that that some of these things are response to genuine problems in the black community.

She's convinced that IQ tests are "culturally biased" ("we give culturally biased IQ tests in the classrooms every day all over this country, and children of color are routinely expected to pass them.") and uses a test called the Dove Counterbalance Intelligence Test to make white people feel ignorant by asking them for obscure general knowledge from the black experience of the 50's and 60's. (The test involves vicious racial stereotyping,—craps, welfare, alcohol—and if it had been written by a white sociologist rather than a black one, it would have caused a riot.)

This test is one of many devised to highlight the difference between black and white cultures. It's frankly designed to create a test which whites can't pass, ("giving white folks a chance to have their IQ scores based on their ability to correctly respond to material about which they know practically nothing." Jane Elliott) which supposedly discredits the concept of IQ testing altogether.

I can actually pass this test, with 11 out of 15 questions, but that's because I specialize in obscure knowledge.

The idea that people who don't know how long to cook chitlings, don't know jazz great Charlie Parker's nickname, or that Jet is the name of a black news and gossip magazine are suffering from the same kind of educational problem that kids who can't pass algebra after 12 years of compulsory education have is ridiculous.

I wish my knowledge of Jane Elliott's philosophy was obscure. But it's not. Her opinions are actually the mainstream of diversity education, and there's more of it every day.