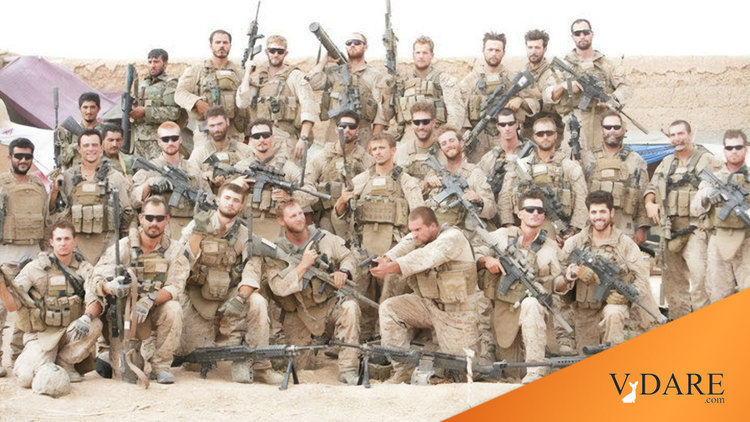 That relentlessly liberal magazine, In These Times, has just published a long article on rape in the military [Why Soldiers Rape, by Helen Benedict, August 13, 2008]. Echoing the now-fashionable view, it explains that a rapist is "a torturer who uses sex as a weapon to degrade and destroy his victims". It blames rape on a military "culture of misogyny." It reports that the 14 percent of the armed forces who are now women must submit to "military language" that reveals "unabashed hatred of women," and that rape and sexual assault have been a problem for decades.

The proposed solution: A radical revamping of military "culture" to make soldiering safe for women.

Let us stop for a moment and remind ourselves what soldiers are for. Their job is to find and kill the enemy. Ever since the Stone Age, it has been clear that the best people for that job are tough, aggressive young men. Soldiers have to kick down doors, stay cool under fire, and if need be, kill people with their bare hands. They may have to spend hours humping artillery shells, marching in the heat in combat gear, or live for days in the same clothes. What's more, in today's all-volunteer army, they have to want to do these things.

Soldiers must also be able to trust each other with their lives. Ever since the Greeks, commanders have understood what we now call "unit cohesion". Soldiers have always cherished loyalties forged in battle.

It just so happens that men of this sort have at least an average interest in sex—at an age when "average" means just short of obsessed. An army in the field is a giant locker room, where young men give vent to their adolescent nature, and strike vulgar poses precisely because there are no women around.

What happens when women show up? A reported 10 percent of the soldiers who have been to Iraq and Afghanistan have been women. [Women in Combat : NPR, October 1-5, 2007] With only a few exceptions, those assignments are essentially combat, with all the danger, stress, and close quarters that go with it.

What happens when a unit gets a woman assigned to it? If she is even slightly good-looking every one of the men—and I mean every one of them—will want her. That means advances, rejections, jealousies, resentments, and men who were once comrades become competitors of the most elemental sort. One or more of the men will get her and everyone will know it. Some of the men who don't get her may have to listen to her grunting and squealing, just eight feet away through two layers of tent cloth.

Anyone who does not understand the poisonous effect this has on morale and unit effectiveness has either never gone through adolescence or simply refuses to see the obvious.

But does this explain rape? In These Times moans that rape is twice as common in the military as among civilians, and especially frequent in the war zones.

Only twice as high? Soldiers are chosen from the very segment of the population that commits practically all rapes. In contrast, the category of "civilians" includes old men and babies. That surely means soldiers are less likely than civilians of the same age to be rapists.

What is more, the most common type of rape in the military is reportedly date rape, or "offender-known rape," [Reported Cases of Sexual Assault in Military Rise, by Michele Norris, NPR, October 4, 2007] hardly the sexual torture and degradation that In These Times shudders over. Young men—especially tough, aggressive young men—want sex more than they want just about anything else. Sometimes, regrettably, they take it by force.

What In These Times foolishly calls the "culture of misogyny" is normal adolescent male lust that has been concentrated and expressed through intense camaraderie. It is inevitable among the sort of men we expect to lay down their lives for us.

Soldiers simply do not hold maiden honor in the same high esteem that seminarians do. It is just as foolish to be shocked when soldiers sometimes mistreat women as it is to think the football team is no more likely than the chess team to lay hands on a coed. We choose football players and soldiers for certain traits, and the hard fact is that we cannot eliminate the bad without eliminating some of the good.

Until we are prepared to entrust our lives and liberties to seminarians we will have to accept a certain amount of swagger in our soldiers.

Women should be nowhere near combat. As Dave Grossman points out in On Killing: The Psychological Cost of Learning to Kill in War and Society

, even men have strong, built-in resistance to killing. They have to be trained to overcome it. We deliberately decivilize men in order to make them efficient killers, and the law is always looser around these semi-barbarians. Women are likely to get hurt. They should stay out of sight.

This is entirely aside from the question of whether women can even to do the job. The Center for Military Readiness pointed out the obvious: women are, on average, smaller than men and have half the upper-body strength. They have only about 70 to 75 percent of the aerobic capacity of men, so they wear out sooner. [Women in Combat: Frequently Asked Questions, Center for Military Readiness, 22 November 2004.] There may be a few female Olympians who can keep up with the boys.

But the Army doesn't get Olympians. It gets average women. So it drastically lowers physical standards to let them in.

The military brass know that it is official policy to put women close to the front—even if they are not supposed to be assigned to the combat arms themselves. How many really think it is a good idea? Every soldier I have spoken to privately assures me that if a female medic is unable to carry a wounded man to safety and he dies, the authorities will make sure we never hear about it.

Some cases of incompetence are too spectacular to keep under wraps. One was the 1994 case of Kara Hultgreen who, just a few months after getting certification as the first woman F-14 pilot, killed herself in a botched landing on the carrier Lincoln. Her training records were full of errors that should have washed her out of flight school. But the Navy was desperate for a women pilot.

A few countries have actually put women into combat. In 1948, the Israelis gave women guns and taught them to fly fighters.

But they stopped doing it. The women couldn't fly, and they caused problems on the ground. Dave Grossman, in the same book, notes that men took foolish, dangerous risks to protect women, and that soldiers were so rattled by the screams of wounded women they could not be controlled.

The Australian army looked into putting women in combat and found the same thing: It is much easier to teach men to kill than to teach them to treat women no differently from men. [Women in the Military Service, By Melody Kemp, Isis, 1999]

Jessica Lynch is a perfect example of both reasons why women shouldn't be anywhere near the fighting. It is no doubt because the Army knows exactly what most Americans think of women in combat that they invented a fairytale about this 100-pound girl's heroic fight to the knife with the Iraqis even though she never fired a shot. The Army also made the classic mistake of going to absurd lengths to rescue her. They sent a combined team of Delta Force, Army Rangers, Navy Seals, and Air Force Pararescue Jumpers—who had far better things to do—to snatch her from a hospital that turned out to be unguarded.

Even if women were competent soldiers, sex in the ranks would still be a huge problem, if only because it is such a distraction. As one solder in the quartermaster corps explained to me, his Iraq-based unit did "more f***ing than fighting." Another soldier told me that even women who were not particularly promiscuous liked to take racy digital pictures of themselves and hand them around.

Navy ships, on which men and women spend months at a time in close quarters, are notorious love boats, with all the distractions of heartbreaks, jealousies—and pregnancies. The Navy counts pregnancies more carefully than the other services because it doesn't want to be stuck with sucklings at sea. It hands out contraceptives like party favors, but figures collected since 2000 show that a consistent 10 to 12 percent of women at sea are pregnant.

Even more shore-based women are pregnant. A 2005 study found that 64 percent of sailors who get pregnant didn't mean to (the figure for the country as a whole is 49 percent). This is what happens when you put a few young women in a boat with a lot of young men.

The Navy does not let single mothers with custody enlist, and until 1975 it kicked out any single woman who got pregnant. Not anymore. By 2005, 14 percent of all lady sailors had become single mothers. They stash their children ashore with relatives and may not see them for months. Women who get pregnant at sea are transferred off the ship in their 20th week, and other people have to do their jobs.

Submarines are the only ships in the Navy that do not allow women. The official reason is that because space is so tight it would cost $300,000 per bunk to convert to segregated quarters, whereas it costs "only" $4,000 per bunk to convert an aircraft carrier. As anyone who ever talked to one knows, submariners are proud to be the last bastion of what they consider sanity.

As for the problem In These Times' Helen Benedict is worried about, the obvious solution is to keep women out of dangerous jobs they can't do—and away from the men who can.

Benedict claims that, of the 40 women she interviewed over the last two years, no fewer than 38 "were constantly sexually harassed by their comrades while they were serving in Iraq or Afghanistan."