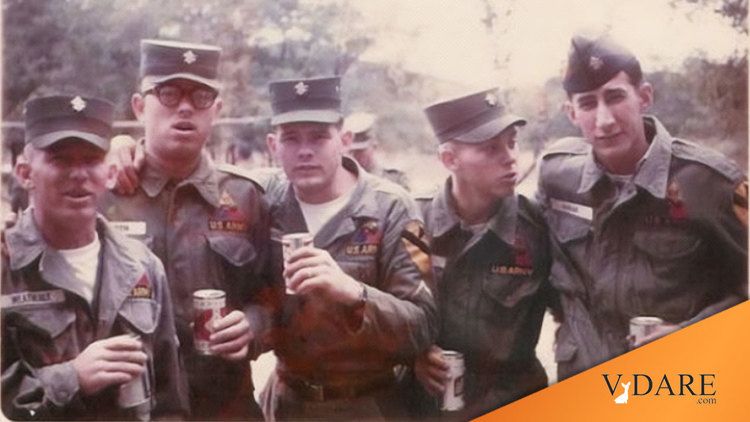 Message To Vets On Veterans Day: Get Off Meeting Hall Bar Stools—Enlist In Immigration Wars!

Dave Gorak is the one on the (ahem!) far right wearing a garrison cap.

I am not a combat veteran. My military service included a year with the 1st Reconnaissance Squadron, 9th Cavalry, an armored unit stationed along Korea's Demilitarized Zone, nearly 10 years after a ceasefire ended fighting there.

What we did wasn't particularly notable: Monitoring the activities of North Korean troops on their side of the Military Demarcation Line, listening to radio chatter, learning to identify the other side's aircraft and vehicles by their silhouettes, recognizing uniform insignia, participating in field exercises, and, of course, looking forward to Pay Day so we could drink beer until we were stupid and silly.

My question is this: If I, whose Army experience was relatively tame, am upset by people entering this country illegally, wiping their feet on our immigration laws and sovereignty, waving foreign flags in our streets while demanding that we afford them respect and dignity, where are the voices of those veterans who experienced things I thankfully was spared?

In light of our stupid and irresponsible immigration policy, where is these veterans' anger over having watched some of their friends die for what they were told are American values and principles—which our government now apparently has kissed off?

When I became involved with the immigration issue nearly eight years ago, I naively thought that one of the ways to turn things around was to get the various veterans groups fired up and turn them loose against their members of Congress. Who better to do it than those who risked all because their government said it was necessary? A government that through its immigration policy now is saying it was all for nothing, that they were just so much cannon fodder, as the old saying goes.

To say I was out of touch with the real world is an understatement. One of my first attempts to motivate veterans was a presentation to a VietNow chapter in Villa Park, IL. A dozen or so of these Vietnam vets sat for an hour or so listening and nodding their heads in agreement. But that was the last I heard from any of them.

Later, I approached other organizations that I surely thought would jump at the opportunity to raise the awareness level. Several Rolling Thunder chapters in Illinois, where I lived at the time, didn't return any of my calls or answer my e-mails. Ditto for the Patriot Guard Riders, a national organization of motorcyclists that, among other things, provides a buffer between mourning families at military funerals and wacko religious groups and others who exploit these events to push their anti-war messages.

And ditto the VFW post down the street from our home.

How many veterans really buy the hollow tributes from politicians who wave the flag when it's convenient and go to great lengths to assure those who served just how much they care?

Are these veterans really taken in each Veterans Day when a somber-faced President Bush, Mexico's point man in the United States, places a wreath at the Tomb of the Unknowns?

Maybe some veterans feel that, as they've already served their country, it is time for others to step up.

I'm sorry—but I think that's selfish, at a time when this country is being invaded each year by thousands of unskilled and uneducated people from Mexico, an arrogant and corrupt nation unwilling to provide for its own people.

We in the patriotic immigration reform movement know only too well that many of our "fellow citizens" will never join us for various shameful reasons—cowardice, laziness, greed etc. We need all the voices we can muster—especially those veterans who know better than most that "freedom isn't free."

Retired Army Col. Al Rodriguez, founder of Veterans for Secure Borders and You Don't Speak for Me, put it this way this last summer during an Illinois Minuteman Project meeting in Aurora, IL:

"Veterans fought for this country once, and they must get ready to fight again. It's time for them to get off their bar stools in their meeting halls and deal with this problem."

Rodriguez is right. Those who wore the uniform in battle have to do much more than participate in fund-raising efforts like steak, chicken and pork "feeds," local parades, helping to instill patriotic values in local school children by teaching them the proper way to fold the flag, judging their essays about "what it means to be a good American," and donating cash to worthy high school students headed to college.

Thus far I've painted a pretty discouraging picture of those who I believe naturally should be at the forefront of our movement.

But I've recently seen some hopeful signs that perhaps things are about to change—thanks to the American Legion, the America's largest veterans services organization. (I am a member). To date, it is the only organization of its kind to take a stand against illegal immigration.

Last spring, during its annual Legislative Conference, the Legion devoted an entire afternoon to the immigration issue. It included a presentation by NumbersUSA President Roy Beck. On May 10, the Legion issued a resolution and strategy paper condemning illegal immigration and rejecting any form of amnesty and delivered both to every member of the Congress.

But resolutions are meaningless unless there is action to back them up.

The Legion has 2.7 million members. But only 3,000 of them have signed up to receive the group's e-mail legislative alerts asking them to contact their members about legislation that affects them directly.

(Steve Robertson, the Legion's legislative director, says it's unknown just how many members ultimately get the alerts, because some of those who initially receive them use their own address books to pass along the information.)

The Legion further increased awareness of the illegal immigration crisis in its October issue of the Legion magazine with its cover story "Southern Discomfort," by James Jay Carafano.

Here are Carafano's recommendations for dealing with the crisis:

Carafano says that these elements—along with a rejection of amnesty—offer a path to strengthen national security; and to replacing an illegal alien labor force with temporary workers and new legal immigrants.

Carafano's piece was certainly welcome. But to me, it was somewhat of a disappointment because

Since the creation of our Constitution, more than 600,000 Americans have died in the service of their country. Each year we honor all of them. We tell ourselves and all who listen that their sacrifices were not in vain.

But unless far more of our veterans stand up and begin looking at the "Big Picture", then all the monuments to their sacrifices and achievements here and overseas will be worth about as much as, "a one-legged man at an ass-kicking party."

Dave Gorak [email him] is the executive director of the Midwest Coalition to Reduce Immigration in LaValle, WI. Read his VDARE.COM archive here.