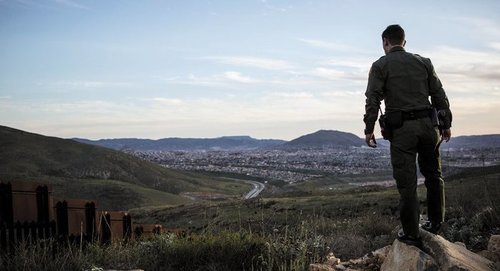 As immigration anarchy continues along our Southern border, American journalists are accelerating their attack on those attempting to prevent this savagery from overwhelming what remains of our country. The latest salvo comes from Garrett Graff [email him], in a POLITICO article designed to prevent Border Patrol agents from defending themselves from increasingly frequent attacks. In the upside down world of the Main Stream Media, it’s the illegal immigrants who are under attack and the Border Patrol agents who need to be stopped.

Graff bestows the title of “The Green Monster” [Politico Magazine, November/December 2014] upon his piece of agitprop, which he claims is how U.S. Customs and Border Protection (CBP) officials refer to their immigration enforcement agency. (But this is the first time this writer, with 20 years’ experience in relevant government service, has heard this term.) And if the title wasn’t enough of a sign, Graff calls the Border Patrol “America’s most out-of-control law enforcement agency.”

Of course, the real story is not about “control,” but media misdirection. Graff’s bait-and-switch is that he paints a picture of a corrupt agency terrifying peaceful migrants with its eagerness to use force. However, he ignores the reality that it is Hispanic misconduct along what I’ve called the “Brown Run Border” that has brought Third World standards to a once-proud agency. And Graff’s overall goal is the same as that of the Left generally—ending immigration law enforcement altogether.

For example, Graff begins by telling the story of Esteban Manzanares, a Hispanic Border Patrol Agent from McAllen, TX who committed suicide rather than be arrested for a murder and kidnapping he committed while on-duty. But this strange story really has nothing to do with immigration enforcement. Graff does not mention the Hispanic angle, nor the fact that, until recently, applicants for the Border Patrol Agent position were not polygraphed before hiring and background investigations were not conducted until after a person was hired and on duty. Other government departments have similarly lax hiring standards.

Graff claims that new Commissioner of Customs and Border Protection Gil Kerlikowske, whom he sets up as a hero of his piece, was “blocked” by his own staff from issuing a press release condemning Manzanares’s actions. Indeed, Graff claims that Kerlikowske had to run to DHS head Jeh Johnson to get “approval.”

A head of an agency unable to write his own press release and give it to the press? Assuming this is true (doubtful), it would certainly show that Kerlikowske had no control over his own agency.

But the reason for this odd framing device becomes apparent as the piece continues. Graff writes,

The Border Patrol wing of this vast apparatus has experienced particularly dramatic growth: By the time the Bush administration left Washington, the fiercely independent agency—part police force, part occupying army, part frontier cavalry—had gone from being a comparatively tiny, undermanned backwater of the Justice Department to a 21,000-person arm of the largest federal law enforcement agency in the country. [Emphasis added]

Here, Graff portrays the USBP as what the radical Left claims it is, an “occupying army” in the Southwest United States, which (it is implied) justifiably belongs to Mexico anyway. Like the “frontier cavalry” of the Bad Old Days, it’s just another tool by which whites wage a racist war.

Graff gives the game away when he identifies his real problem with the Border Patrol – like Officer Darren Wilson, they don’t lay down and die like they are supposed to.

But the Border Patrol has also become one of the nation’s deadliest law enforcement agencies over that same period, involved in more fatal shootings—at least 46—since 2004 than perhaps any other such agency. (As this summer’s events in Ferguson, Missouri, showed, definitive statistics on fatal law enforcement shootings are notoriously difficult to collect.) An internal report last year that the agency tried to keep secret accused its agents of shooting their weapons not out of fear for their lives but instead out of “frustration.”

So, 20,000 or more BPAs were involved in just 4 fatal shootings a year between 2004 and 2014. That’s very low. Given the violence on the border, we should expect more shootings. The reference to “frustration” is also an interesting cue about how demoralized Border Patrol agents are—they are not allowed to enforce the law and their own President despises them.

As one senior DHS official told me, “The agency has created a culture that says, ‘If you throw a rock at me, you’re going to get shot.’”

What, precisely, is wrong with this? Perhaps this “senior DHS official” will volunteer to be hit with a rock? Rocks are deadly weapons, and law enforcement officers are authorized by law and policy to use deadly force to stop such attacks. Graff’s attack on use of force by Border Patrol Agents is cover for an attack on immigration law enforcement itself. 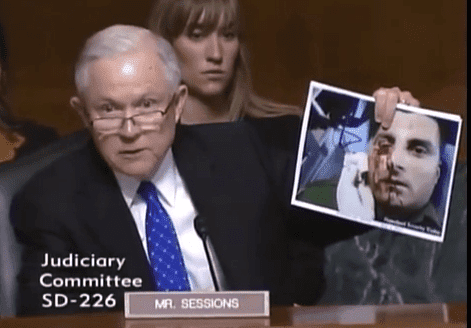 Above, Senator Jeff Sessions holds up a picture of a Border Patrol agent injured by a thrown rock.

How do we know? Graff summons the hoariest of what Lawrence Auster called the “huddled clichés” and intones,

The irony of New York’s Statue of Liberty is that the Emma Lazarus poem inscribed on its base at its dedication in 1886, “Give me your tired, your poor, / Your huddled masses, yearning to breathe free,” marked almost precisely the moment the nation’s borders began to close to new immigrants—especially the tired, the poor and the huddled masses.

That same decade, Congress passed the first comprehensive immigration act, expanding earlier limits on Chinese and other Asian immigrants to include bans on “lunatics, idiots, convicts, those liable to become public charges, and those suffering from contagious diseases.” In 1891, the United States began to deport those who entered the country illegally. [ Links added—the poem,  inscribed on a small plaque inside the statue's pedestal, was actually added in 1903.]

Note the way Graff links the prohibition on importing welfare cases and criminals to “racism.” For him, the problem with the Border Patrol is not its actions, but its mere existence.

Continuing his misdirection, Graff neatly segues from the real problem of massive corruption in CBP and USBP to allegations of use of excessive force. Note the important qualifier—allegation. He makes much of a claim that, over the course of five years, there were 1,700 “allegations” of “excessive force” leveled against the CBP. But that’s actually not very many, considering the tens of thousands of agents working over thousands of miles of border over five years. And we can certainly assume that many of these “allegations” won’t pan out.

Thus as evidence of the veracity of all allegations of excessive force, Graff mentions two shooting cases—neither as clear cut as he claims. He writes:

In 2012, in an incident caught on a home video camera, Mexican citizen Guillermo Arévalo Pedraza was in a public park … someone in the park began throwing rocks at a passing patrol boat in the Rio Grande. Agents in the boat opened fire with heavy weapons, killing Arévalo, who does not appear to have been involved in rock-throwing. [Emphasis added].

But even a cursory view of the video reveals nothing of the actual shooting, nor does it exonerate Arevalo. The video is for the most part worthless on either the rocking incident or Arevalo’s involvement.

In another video from June 2010, watched more than 1.6 million times on YouTube, Border Patrol agent Jesus Mesa Jr. fires across the concrete bed of the Rio Grande between El Paso and Juárez, killing a 15-year-old boy. The agent said later that he was surrounded by rock-throwers, but the video contradicts that story.

But the video does show illegal aliens to BPA Mesa’s right and front, although it is not of sufficient quality to show the rock attack.

Furthermore, this writer has it on good authority that the Department of Homeland Security Office of Inspector General and the Border Patrol both conducted separate investigations that exonerated Agent Mesa. Graff’s issue is not that there are no investigations – it’s that he doesn’t like the results of those investigations.

As we see in Ferguson with the shooting of “Gentle Giant” Michael Brown, there is an MSM/ Leftist Narrative that law enforcement is inherently racist and violent – even though the federal government is actually under the control of individuals blatantly animated by anti-white prejudice. The objective of this Narrative: to make it illegal for white cops, Border Patrol agents, and—as we saw with “white Hispanic” George Zimmerman—ordinary American citizens to defend themselves.

Graff’s ignoble essay is just another sad installment in this never-ending war against the historic American nation and the people on the front lines doing their best to defend it from enemies abroad—and traitors at home.