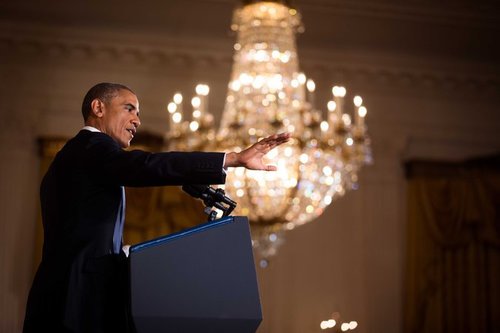 President Obama is explicitly favoring illegal aliens above American citizens and placing their interests over our own rule of law. That fact is sufficient explanation for anyone who can’t understand how the Republican Party won such a crushing electoral victory on November 4th.

But Republicans need to be cautious. As a Democrat, I agree with neoconservative commentator Charles Krauthammer: Krauthammer: Elections gave GOP a chance, not a mandate, Houston Chronicle, November 6, 2014]

The GOP also faces a challenge, as Barack Obama is showing every indication that he will go through with a massive unilateral Amnesty/Immigration Surge via an Executive Order.  According to the Associated Press, President Obama says that he “intends to issue an order easing the threat against deportation for immigrants in the country illegally.” Worse,

He'd act despite warnings from Republican leaders that he would be poisoning the well with a newly elected GOP-controlled Congress.

Obama tells CBS' "Face the Nation" that even if he goes ahead, there still would be room for Congress to pass immigration legislation.

He says if Congress does act, it would take the place of whatever he puts into place by his own authority.

Obama is expected to issue an order before the end of the year.

It's a step that incoming Senate Majority Leader Mitch McConnell and House Speaker John Boehner both warned against in postelection news conferences.

The President keeps asking for an immigration bill.  If the GOP is serious, they should give him one. The Republicans should send a bill that would make E-Verify permanent and mandatory for all American employees, even those who are already hired.

That alone would force President Obama to go on record that he doesn’t actually believe in enforcing immigration law.

A casual glance around the world shows vast masses of people in the Middle East, Latin America and Asia who are utterly ignored by their governments and unable to receive even basic needs. There’s nothing progressive about creating that kind of environment within our own Republic.

And that kind of thinking will keep Democrats like me staying at home when the next election rolls around.

The corporate world may want to pig out on cheap labor, the various ethnic lobbies and churches may want more recruits, and the Main Stream Media may demand more Political Correctness, but those of us who believe in the vision of the Founding Fathers are still the people who decide elections.

And every day, the Silent Majority of Americans is more and more disgusted at the greed, selfishness, and short-term thinking of those who claim the right to rule us.