Mexico’s vicious drug cartels and Islamic jihadists must certainly be happy to hear that throwing a couple rocks at officers will give them free entry to the United States. The reason is the instruction of the DHS for the Border Patrol to behave more gently toward violent alien invaders.

One might reasonably suspect that demands from open-borders activists that officers being physically attacked should withdraw rather than respond with self-defense. And in fact, that has been the case: U.S. border agency under pressure to reform use-of-force policies (LA Times, 2/28/14). Plus, the administration is obviously friendly to any opportunity to decrease border security to please the raza crowd.

However rock-throwing has been dangerous for Border Patrol agents. In 1979, a BP chopper was brought down with a rock.

As shown by the examples below, rocks thrown by illegal aliens cause serious injuries to Border Patrol agents. 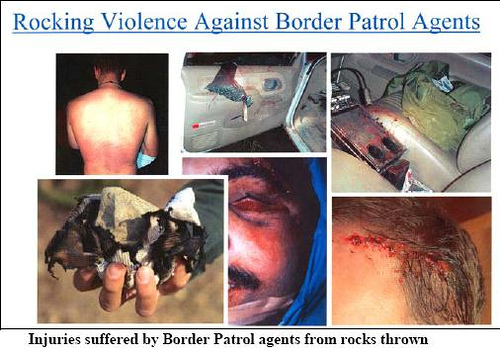 Welcome terrorists, criminals, job thieves and mooches! America is open to you.

Top administration officials have directed 21,000 border patrol officers to retreat whenever illegal immigrants throw rocks at them, and to avoid getting in front of foreign drug-smugglers’ vehicles as they head north with their drug shipments.

“Agents shall not discharge firearms in response to thrown or hurled projectiles… agents should obtain a tactical advantage in these situations, such as seeking cover or distancing themselves,” said the instructions, issued Mar. 7, under the signature of Michael Fisher, chief of U.S. Border Patrol.

Agents were also directed to keep their weapons holstered when drug smugglers drive by.

Agents can’t use guns against “a moving vehicle merely fleeing from agents,” say the instructions.

The new instructions do allow agents to use guns to defend themselves from vehicles that drive at them. “Agents shall not discharge their firearms at a moving vehicle unless the agent has a reasonable belief that… deadly force is being used against an agent,” the new instructions say.

However, the instructions also suggest that officers be penalized if they don’t step back. Agents “should not place themselves in the path of a motor vehicle or use their body to block a vehicles’s path,” according to new instructions.

The new curbs were praised by advocates for greater immigration, including Juanita Molina, director of the Border Action Network. New Jersey Democratic Sen. Robert Menendez, and Democratic Rep. Zoe Lofgren, according to the Los Angeles Times.

Menendez is one of the drafters of the June 2013 Senate immigration bill, which would boost the inflow of legal immigrants and guest workers up to 40 million over the next decade. During the same period, roughly 40 million Americans will turn 18.

The new rules were issued at the direction of Jeh Johnston, the new head of the Department of Homeland Security.

The rules match the recommendation of a report by an advocacy group that wants to reduce policing of illegal immigration.

The report by the Police Executive Research Forum was commissioned by DHS, and it said border agents should be barred from standing in front of smugglers’ vehicles or from shooting at people who are attacking them with rocks.

The commissioned report was challenged by mid-level DHS officials, who argued that the rules barring self-defense from rock-throwers “could create a more dangerous environment [especially for agents operating] in rural or desolate areas, often alone, where concealment, cover and egress is not an option,” according to a report in the Los Angeles Times.

But Johnston overrode the internal response, and forced the implementation of the advocacy groups’ recommendations.

The PERF report was commissioned by top DHS leaders after advocates said law-enforcement agents had killed roughly seven people a year along the 1,933-mile border in 2010, 2011 and 2012. The shootings came during 67 clashes with a huge stream of armed drug-smugglers and illegal immigrants.

Three U.S. border guards have been killed in recent years, including one who was shot during a clash with drug smugglers carrying AK-47 assault weapons.

In a Friday news conference, Fisher told reporters that agents would be equipped with short-range tasers and pepper spray, plus medium-range pellet guns, to deter attacks.

The agents killed only 10 drug-smugglers and other attackers during the same three-year period, Fisher said.