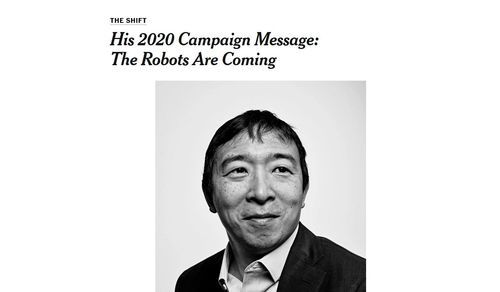 A recent survey of Democrats vying for the 2020 Presidential nomination runs over a couple dozen, some of whom are familiar mugs from the Congress plus others who are semi-identifiable mayors, business people and failed office seekers.

As a result, the lesser known candidates need to make a splash so people will remember them.

Today’s example is entrepreneur Andrew Yang, who entered the fray a year ago with a New York Times article introducing him as a tech Cassandra with the headline, His 2020 Campaign Message: The Robots Are Coming.

That approach may have been too gloomy at a time when the jobs economy had been booming, so he is back with an offer of free money — a sure-fire attention getter.

When Fox News host Pete Hegseth asked his guest on Sunday what was up with the cash giveaway, Yang answered, “In my mind, the reason why Donald Trump is our president today is that we automated away 4 million manufacturing jobs in Michigan, Ohio, Pennsylvania, Wisconsin, Missouri, Iowa, and now we’re about to do the same thing to millions of jobs in retail, call centers, truck drivers, fast food and on and on through the economy. And this message is resounding loud and clear when I talk to Americans in early states around the country.”

Hegseth criticized the idea, but actual experts contemplating the coming automated society have also suggested the strategy of Universal Basic Income. Martin Ford discussed the UBI concept in his influential book Rise of the Robots: Technology and the Threat of a Jobless Future. He also presented a TED Talk on the topic, viewable here.

In fact many tech experts have rolled out serious predictions that should be considered by our political leaders in Washington. Here is my growing list of warnings: Oxford researchers forecast in 2013 that nearly half of American jobs were vulnerable to machine or software replacement within 20 years. Rice University computer scientist Moshe Vardi believes that in 30 years humans will become largely obsolete, and world joblessness will reach 50 percent. The Gartner tech advising company believes that one-third of jobs will be done by machines by 2025. The consultancy firm PwC published a report last year that forecast robots could take 38 percent of US jobs by 2030. In November 2017, the McKinsey Global Institute reported that automation “could displace up to 800 million workers — 30 percent of the global workforce — by 2030.” Forrester Research estimates that robots and artificial intelligence could eliminate nearly 25 million jobs in the United States over the next decade, but it should create nearly 15 million positions, resulting in a loss of 10 million US jobs. Kai-Fu Lee, the venture capitalist and author of AI Superpowers: China, Silicon Valley, and the New World Order, forecast on CBS’ Sixty Minutes about automation and artificial intelligence: “in 15 years, that’s going to displace about 40 percent of the jobs in the world.” A February 2018 paper from Bain & Company, Labor 2030, predicted, “By the end of the 2020s, automation may eliminate 20% to 25% of current jobs.”

Certainly, it is insane for America to continue admitting low-skilled foreigners from peasant economies when machines will be replacing them in a few years. It was disappointing to hear President Trump remark recently that he wanted “more people coming into our country” — a policy which won’t help citizen wages rise and does not recognize the technological train wreck coming our way.