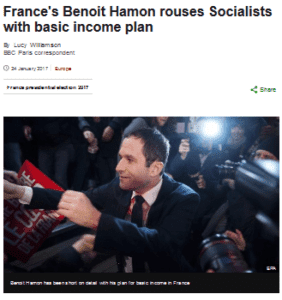 For some time, I've argued a Basic Income policy is all but inevitable as automation continues and an increasing share of the population becomes not just unemployed, but unemployable. Of course, as with every other major policy area from health care to education, immigration is the most important aspect of all this because no state can provide a subsidy for nothing to the entire world's population without suffering complete social collapse. Still, the political movements which can come to terms with and think of solutions to the new world which is coming may dominate politics in the years ahead.

The French Socialists, who have been devastated in recent years, are clearly starting the process of evolution.

He's been called the "French Bernie Sanders". After his decisive win in the first round of France's Socialist party primary, left-wing rebel, Benoit Hamon is suddenly the centre of attention.

But what do his rapid rise and eye-catching policies say about the future of the French left?

With his designer stubble and cheeky grin, the 49-year-old Socialist party rebel has been grabbing more than his share of the limelight over the past few weeks.

The most left-leaning of the seven initial candidates in the Socialist race, his programme has been built around the radical proposal of a universal monthly payment for all French citizens, regardless of income. He also wants to legalise cannabis, to tax the wealth created by robots and to ditch the labour law passed last year that made it easier to hire and fire.

The income plan he has outlined would be put into effect in three stages.

From a Leftist point of view, this is attractive not just because it gives them a fresh message to confront a resurgent Right, but because it is essentially a way to subsidize an activist class of young voters who can be turned out in the street. All good political policies don't just reward your constituents but actually further their radicalization and dedication to your cause.

Of course, there's a big problem here. Who is going to pay for it? The French Left is already having a hard time paying for the existing welfare state and keeping businesses when taxes are so high. Are they going to somehow implement this program AND still turn a blind eye to the mass Third World invasion of the Republic? Even implementing such a policy for the actual French would be difficult; subsidizing all of Africa and Arabia will be almost impossible.

But that doesn't mean it won't happen. Under universal suffrage, the numbers don't have to add up for programs to be popular. This is going to be a real issue in the years to come. The French Right, and the American Right, better start thinking of some answers.