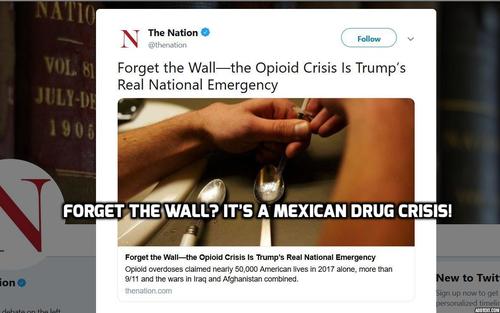 The NATION Wants Us To "Forget The Wall" And Tackle...The Mexican Drug Crisis?

The Nation has come out with this:

The crisis about which they're trying to alert us, the "Opioid Cris" is actually Mexican drug crisis, and is exactly the thing that a wall would help prevent, keeping out Mexican drug dealers and Mexican drugs.

Earlier than that, a quote from Thrilling Cities, by the author of the James Bond novels:

Overdoses, remember, are the number one cause of death for Americans under the age of fifty—and this plague disproportionately affects whites. While the “opioid crisis” is talked about regularly, and (appropriately) with great gravitas by the Mainstream Media [The Poison We Pick, By Andrew Sullivan, NYMag, February 20, 2018], they rarely talk about the footsoldiers leading the counter-attack—namely the DEA.

With an annual budget of only two billion dollars, and about 10,000 employees, the DEA is a small agency. ICE, which is not considered big either, has twice as many employees and nearly four times as much money. But the DEA is still a force to be reckoned with. This July, in the Bronx, agents seized about 55 pounds of heroin and fentanyl. (Pictured right)To give you a sense of just how much that is, consider that the amount of heroin that typically leads to overdose is 200 to 500 milligrams (it varies widely because of the different tolerances among users, and the differing levels of purity of street heroin). If we split the difference and put the average overdose amount at 350 milligrams, then one pound of heroin contains a total of 1,296 average overdoses. 55 pounds contains a total of 71,280 average overdoses—enough to kill every resident of Bismarck, North Dakota. With that seizure came five arrests.

By the way, I haven't read the article. I literally don't care what arguments they're making.