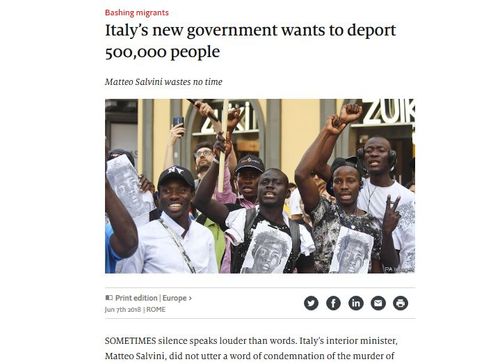 The Great and the Good are furious about Donald Trump’s conduct at the G7 Summit, as journalists can’t believe an American president had the temerity to stand up for his nation’s interests at an international conference [One ‘rant,’ rough talks sour G7 mood in confrontations with Trump, Reuters, June 9, 2018]. They are especially incensed that President Trump broached re-admitting Russia into the summit, with the arch-traitor John McCain condemning the Commander-in-Chief on Twitter [Trump calls for Russia to be reinstated to G-7, threatens allies on trade, by Damian Paletta, Anne Gearan and John Wagner, Washington Post, June 8, 2018].

Yet for all the talk of President Trump having problems with “allies,” it is the European Union that is facing rebellion within its own ranks. As President Trump recognized on his Twitter account, the new government of Italy is now one of his strongest international supporters.

Just met the new Prime Minister of Italy, @GiuseppeConteIT, a really great guy. He will be honored in Washington, at the @WhiteHouse, shortly. He will do a great job - the people of Italy got it right!

Though the election of President Trump was a shock to the global Establishment, the victory of the new Italian government may prove to be even more important. The Five Star Movement and the Lega party, both of which are best described as “populist,” have joined forces to create a government that is prompting speculation about the breakup of the European Union [Italy’s new government could be the force that finally breaks Europe, by Sebastian Mallaby, Washington Post, May 23, 2018].

Obviously, immigration patriots are most interested in the new interior minister, Matteo Salvini of Lega. He has already promised to deport half a million illegals, telling them to “pack your bags”. [Italy’s new government wants to deport 500,000 people, The Economist, June 7, 2018] Salvini also has a compelling message on what NATO should be used for, calling for collective European self-defense on immigration rather than scare mongering about Russia. “Italy is under attack from the south, not from the east,” he said recently [Italy to ask NATO to help deal with migrant flows: Salvini, by Crispian Balmer, Reuters, June 8, 2018].

Yet it is not just immigration policy that put this populist coalition in power. Lega is the more nationalist of the two ruling parties (despite originally starting as a Northern secessionist party.) It also tends to have what Americans would consider more conservative economic policies and during the election, was campaigning alongside Silvio Berlusconi’s center-right party.  The Five Star Movement is more idiosyncratic, with environmentalism and more liberal economic policies among its planks, including the promise of a basic income [Italy’s 5-Star Movement defends guaranteed income pledge, by Michele Bertelli, DW, April 10, 2018].

But both are firmly opposed to the austerity measures being imposed by the European Union, even as the supranational body created a huge migration crisis that disproportionately hurts Italy.

Italy chose nationalist leaders because of Brussels. It’s their fault. No one is voting for Lega and Five Star because they hate globalization. You don’t see Italians rising up in protest against Chinese companies making inroads there. Instead, you see them protesting austerity being ordered from on high by people none of them elected. Instead, you see them protesting against hundreds upon hundreds of migrant men—not migrant families, not migrant women and children—piling in on Zodiacs. That is how Lega and Five Star came to be. Because globalization hasn’t changed in the last 10 years. But since the housing crisis and since the destruction of Libya and, to a lesser degree, Syria, austerity and immigration policy has.

[What Really Worries People About The Italy-EU Fight, Forbes, June 7, 2018]

The Italian people’s fury against Brussels wasn’t helped when key EU institutions pressured Italian President Sergio Mattarella to initially reject a Five Star Movement/Lega government and try to impose yet another pro-austerity finance minister. This might well have triggered new elections, except the resulting furor likely would have led to an even greater majority for the populist coalition [Italy in fresh political chaos amid calls to impeach the president, AFP, May 28, 2018]. Caving to a Lega/Five Star Movement Government was probably the least destructive thing the EU could do at this point.

However, as Srdja Trifkovic points out, even as the corporate media is trying to boost the EU, the Union still faces existential danger.

In the long run, the oligarchs in Brussels and bankers in Frankfurt now face serious threats on many fronts. Brexit, the new coalition in in Italy, growth of AfD in Germany and popularity of Ciudadanos in Spain, along with a defiant Victor Orban in Hungary and his like-minded colleagues in Poland, herald a new era.

Rachel Donadio at The Atlantic hopes international institutions will keep the new government in check on economics, but concedes the EU can’t do much on immigration. She writes: “In the economy, certain European rules could prevent Italy from going totally off the rails. When it comes to immigration, things could get rough—at least in rhetoric” [It’s the Right Wing’s Italy Now, June 6, 2018].

Yet if the EU tries to enforce these “rules,” Italy could easily call their bluff. In the wake of Brexit, the EU can ill afford another member-state breaking with Brussels, particularly given current developments in Eastern Europe.

Italy is a great example of the paradigm promoted by Steve Bannon and others: the current divide in politics is not Left versus Right but populist versus globalist. [Bannon to French far-right party: ‘Let them call you racist… Wear it as a badge of honor,’ by Elaine Ganley, Chicago Tribune, March 10, 2018] Together, Lega and the Five Star Movement have built a powerful coalition of those who feel both economically and socially disenfranchised and have successfully conquered their country. Of course, this being Italy, the coalition is unstable and only time will tell if the coalition can hold together. But for now, it shows that innovative policy making (such as championing basic income), populist economics, and nationalist policies on immigration and sovereignty are a winning combination.

Which is precisely what Donald Trump seemed to represent during the 2016 election. He promised that if he won, the GOP would become a “workers’ party,” pledging not to cut entitlements like Social Security [Trump: GOP will become ‘worker’s party’ under me, by Nick Gass, Politico, May 26, 2016].

Yet, while economic growth is strong, President Trump has not confronted Wall Street since entering the Oval Office—instead, he invited Goldman Sachs executives into his Cabinet. Instead of taking some populist policies from the Left, President Trump has mostly carried water for the corporate GOP Establishment, notably during the disastrous health care debacle.

Trump has been fairly strong on trade and has made some promising moves on immigration (though we still don’t have a wall). But he’s going to have to do more to keep the loyalty of the working-class voters he inspired in 2016.

The MSM has shown it will never accept President Trump’s legitimacy—it is best he keeps his populist credentials by delivering economically for his supporters by defending entitlements, keeping a tight labor market through immigration enforcement, and doing more to cut health care costs.

Indeed, if it didn’t threaten GOP orthodoxy, it would be politically successful if President Trump also started broaching ideas such as more infrastructure spending and maybe even basic income. (Fund it by taxing the entertainment industry).

During the 2016 campaign, Matteo Salvini visited Donald Trump and pledged his support. [Donald Trump gets my backing, says Italy’s Matteo Salvini, by Stephanie Kirchgaessner, The Guardian, April 26, 2016] At the time, it looked like a European fringe candidate drawing inspiration from America.

Now it is time for the American president to draw inspiration from Europe. Ironically, the best way to beat the globalists is to take populism global.