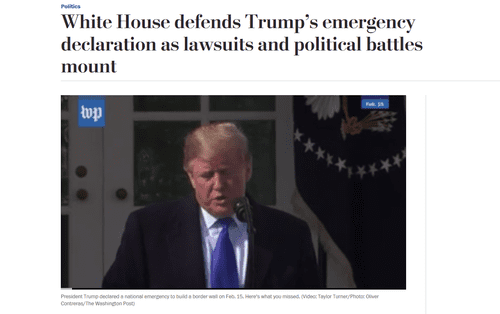 Patrick J. Buchanan: Why Did Trump Have To Declare An Emergency? Because Congress Won't Do Its Job!

“If you look at Trump in America or Bolsonaro in Brazil, you see that people now want politicians who are tough enough to do what they promise,” said Spanish businessman Juan Carlos Perez Carreño.

The Spaniard was explaining to The New York Times what lay behind the rise of Vox, which the Times calls "Spain's first far-right party since the end of the Franco dictatorship in 1975."

Indeed, the growing impatience of peoples with elected leaders and legislators who cannot or will not act decisively explains two realities of our time: the eclipse of Congress and the rise of autocracy worldwide.

In condemning President Donald Trump's decision to declare a national emergency and use Pentagon funds to build his wall, Beltway elites have charged the president with a multitude of sins against the Constitution.

He has usurped the "power of the purse" that the Founding Fathers invested in Congress. He has disregarded the "checks and balances" of Madisonian democracy. He is acting like an imperial president.

Yet the decline of Congress is not a recent phenomenon. And the principal collaborator in its fall from grace, from being "the first branch of government" to the least esteemed, has been Congress itself, its own timidity and cowardice.

Contrast, if you will, the now-inveterate torpor and inaction of Congress with how presidents, declared by historians to be great or near great, have acted.

Thomas Jefferson seized upon Napoleon's sudden offer to sell the vast Louisiana territory for $15 million in an act of dubious constitutionality by Jefferson's own judgment. History has validated his decision.

Andrew Jackson—"John Marshall has made his decision; now let him enforce it!"—shoved aside a Supreme Court ruling denying him the right to transfer the Indians of Florida to the middle of the country.

Abraham Lincoln arrested Maryland legislators to prevent a secessionist-minded legislature from meeting, violated the habeas corpus rights of thousands, ordered Chief Justice Roger Taney arrested, shut down newspapers, and, in January 1863, declared free all the slaves of every state still in rebellion against the Union.

"I took Panama!" said Theodore Roosevelt, whose agents helped rebels shear off the province from Colombia to build his canal.

Without authorization from Congress, Harry Truman ordered U.S. troops into South Korea in 1950 to resist the invasion by North Korea, calling it a police action.

Though a Republican House voted against attacking Serbia in 1998, Bill Clinton continued his 78-day bombing campaign until Belgrade yielded up its cradle province of Kosovo.

Yet while presidents have acted decisively, without congressional authorization and sometimes unconstitutionally, Congress has failed to defend, and even surrendered, its legitimate constitutional powers.

Congress's authority "to regulate commerce with foreign nations" has been largely ceded to the executive branch, with Congress agreeing to confine itself to a "yeah" or "nay" vote on whatever trade treaty the White House negotiates and sends to the Hill.

Congress's authority to "coin money" and "regulate the value thereof" was long ago transferred to the Federal Reserve.

Congress's power to declare war has been ignored by presidents since Truman. Authorizations for the use of military force have replaced declarations of war, with presidents deciding how broadly they may be interpreted.

In declaring the national emergency Friday, Trump rested his case on authority given the president by Congress in the National Emergencies Act of 1976.

The Supreme Court has usurped Congress' powers with impunity.

While the civil rights acts of the 1960s were enacted by Congress, the desegregation of America's public schools was simply ordered by the Warren Court in 1954.

In the '60s and '70s, Congress sat indolent as busing for racial balance was imposed on countless school districts by federal judges.

As the Supreme Court, for decades, exploited the establishment clause of the First Amendment to de-Christianize all public schools and public places, Congress did nothing. A triumphant court then moved on to declare abortion and same-sex marriage constitutional rights.

Yet Congress had the latent power, in Article III, Section 2, to restrict the jurisdiction of the Supreme Court and every other federal court. But the big stick the founders left for Congress to corral a runaway Supreme Court was never picked up, never used.

High among the reasons Trump was elected was that, for all his flaws and failings, he was seen as a doer, a man who "gets things done."

And high among the reasons that autocrats are on the rise is that the centrist parties being shoved aside are perceived as having failed the people in their most basic demands—fewer migrants, more secure borders, preservation of national identity, putting their own people and their country own first.

Whatever may be said of the autocrats, be it Trump, Putin or Xi Jinping, they are not talkers but doers. They act.

And they may very well own the future.