Last weekend’s clash in Portland OR was further evidence that the Alt Right, loosely defined, can field force on the streets—a completely new development in recent American politics (Portland Breathes a Sigh of Relief after Weekend Protester Showdown. But Several Questions Persist About Police Tactics| Police cracked down on only one side—the protesters who threw red-stained tampons at officers while chanting, “All cops are bastards!” by Karina Brown and Rachel Monhanan, Williamette Week, June 6, 2017. [This is a real headline!] Which supports VDARE.com Editor Peter Brimelow’s observation, after the Inauguration Day riots, that “it will come to blood.” The lead-up to Spain’s Civil War provides some pointers to our possible future.

Portland Antifa (by which we mean communists and left-anarchists) had already openly threatened to attack ordinary Republican officials, causing Portland authorities to cancel a parade, and a hysterical media campaign directed against the Right after a recent murder caused Portland’s Mayor to call for a suspension of the Alt Right’s First Amendment rights. Not surprisingly, Republican officials had publicly discussed using organized security forces, which Main Stream Media of course characterized as “militias” .[Portland Republican says party should use militia groups after racial attack, by Jason Wilson, The Guardian, May 29, 2017]

At a time when a “comedian” can post a photo of herself beheading the President of the United States, it’s not a stretch to think America is coming apart. David Hines, in his remarkable “Days of Rage” Storify, posited that America is already in a “cold Civil War” and on the brink of violence. Critically, Hines highlighted the role established institutions play in supporting domestic terrorists on the Left. He argued the Left will have at least the initial advantage in organized violence.

That seemed indisputable—until recently. Conservative speakers have been regularly shut down on college campuses through violence, with no punishment for rioters. Antifa openly urge people to join armed gun clubs such as the John Brown Gun Club. [Lemons: Lefties with Guns Ready to Rumble with Right-Wing Militias, Says Arizona Anarchist, by Stephen Lemons, Phoenix New Times, April 5, 2017] Right-wing conferences are the victims of bomb threats The MSM habitually sides against the victims. And when Richard Spencer was attacked (repeatedly) on Inauguration Day, the MSM cheered it on. [Attack on Alt-Right Leader Has Internet Asking: Is It O.K. to Punch a Nazi?, By Liam Stack, NYT, January 21, 2017.] With adoring MM coverage, kid gloves from the authorities and heavy institutional support, Antifa were gaining in confidence and a willingness to use violence—until recently.

This pattern has repeated across centuries. In 200 Years Together, Alexander Solzhenitsyn described how Communist revolutionaries in Tsarist Russia  were supported by intellectual circles. Their young leadership often came from the privileged classes, including a significant number of Jews. (Curiously, 200 Years Together, while it is available in French and German, has never been published in English, although bootleg translations circulate on the internet.)

Now, however, there seems to be physical resistance from the American Right. Perhaps the most important case: the “Battle of Berkeley” last month, when a loose alliance of conservatives, “Alt-Lite” free speech supporters and Alt-Right activists fought and beat an Antifa attempt to shut down a demonstration. MSM reports suggest Antifa were generally stunned when patriots fought back. 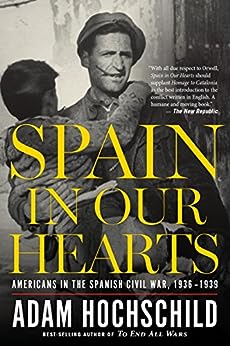 David Hines urges a “National Divorce” before things get worse. I’d argue a “National Divorce” would simply allow the Left a beachhead from which eventually to secure the entire country. And it is unlikely even to work. It seems more likely there will be a larger-scale conflict and political groups willing to use violence will grow larger and more organized.

One of the most likely models of how the polity could collapse into civil strife: the Spanish Civil War. The September/October 2016 edition of Foreign Affairs, a publication of the Council on Foreign Relations, featured a review by Sebastian Faber of Adam Hochschild’s Spain in Our Hearts: Americans in the Spanish Civil War, 1936-1939, profiling the Abraham Lincoln Brigade (or 15th International Brigade), a pro-Communist force which fought for the Republic as “shock troops.”

Many “Lincolns” went on to support Civil Rights and other Left-wing causes. Less publicized, they supported Communism as well. It’s not hard to imagine the Snowflakes in the “John Brown Gun Clubs” of today developing into the “International Brigades” of tomorrow—and receiving similar adoring media coverage.

But what of the Right? If the Spanish Civil War were to serve as a template for a second American Civil War, we should examine the two main rightist paramilitary groups in Spain. They were the Carlists, a monarchist group, whose fighters were known as requetés and considered the most fanatical fighters on the Nationalist side, and the right-wing Falange (= Phalanx). They provided an important source of manpower to the Nationalist Army.

On the eve of the Spanish Civil War, the Falangists numbered about 40,000 men. The Carlists had at least 6,000 men in Pamplona, Navarre and are estimated to have had a minimum of 10,000 men. All day long on the second day of the war, conservative farmers streamed to Pamplona to volunteer for the Carlist forces.

In the first days of the fighting, the Nationalists relied heavily on such militias: regular soldiers were often outnumbered. At the outset, the Carlists secured the region of Navarre. One column of 1,400 men, mostly requetés, marched to Saragossa, to reinforce the army garrison and secure the town.

Without these highly-motivated militias, it would have been impossible for the Nationalists to succeed in the war against the Leftist government; the rebellion would have collapsed in its first week.

Similarly, should civil war visit America again, it may come down to locally-organized groups of both Left and Right, as the regular U.S. military will be spread thin (and probably divided).

In the Spanish Civil War, militias organized around political factions and regions. In the United States, it seems likely militias on the Right, like some of those which exist today, would be organized legally or quasi-legally along constitutional lines (either by the state constitution or the U.S. Constitution.) This might even go down to the county level.

Of course, there is one major difference. While the MSM and the government tolerates or even celebrates organized Leftist violence, the hammer is always ready to fall on organized forces of the right. [Posse Interruptus, Chateau Heartiste, May 30, 2017]

For that reason, as Hines predicted, if there is a second American Civil War, we can expect most of the casualties in the beginning will be on the conservative side.

Finally, there is one other important point: The Right won the Spanish Civil War. Francisco Franco built a great monument to his victory and eventually Spain, saved from Communism, become a democracy. Yet now, the Spanish Left is actually voting to desecrate his grave in the name of Political Correctness. [It’s shameful for Franco’s victims, Spanish MP’s vote to exhume dictator, by Sam Jones, The Guardian, May 11, 2017]

In the end, war is just politics by other means, as Clausewitz said. All war is a media war.

And the battle is never really over.

Patrick Cloutier is the translator of Raciology (reviewed here) and the author of several books of military history.