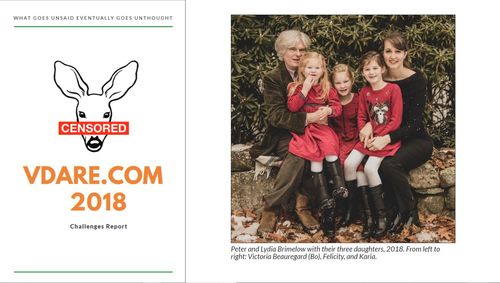 Lydia Brimelow Thanks VDARE.com’s Donors For A Year-End Triumph And Reflects On A Hard Year 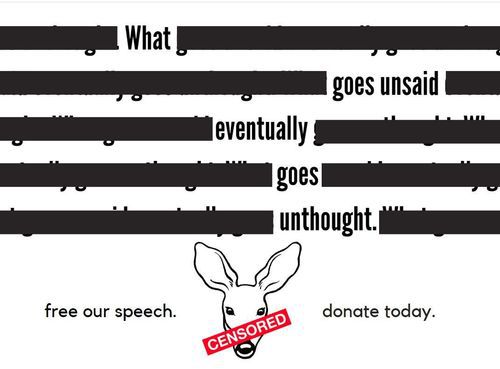 I’ve had a hard time getting a summary together of VDARE.com’s activities in 2018. I like to be upbeat in these reports, and last year was just too much of a rollercoaster for an easy encapsulation.

But I will start with some good news: in 2018, for the fourth year in a row, VDARE.com’s year-end appeal broke our historical records. The final tally was $134,503, more than 34% over our $100,000.00 goal and, as usual, a big hunk of our total fundraising for the year. And that doesn’t include cryptocurrency, which is a small but increasingly significant source of donations for VDARE.com.

I know I speak for Peter and the rest of the VDARE.com team when I say I am deeply humbled and eternally grateful for your support.

Thank you—thank you. We strive every day to secure America “for ourselves and our posterity”—and your moral and financial support is the fuel that keeps us going.

VDARE.com’s year-end success was particularly remarkable because, like many websites—and not just political ones—we have been impacted by mysterious changes to Google’s algorithm in 2018. It’s become much more difficult for us even to search our own site using Google, and new readers are not coming to us as much via random internet searches on key words that we specialize in, like for example “birthright citizenship.”

So traffic was down and remained down no matter what tricks we pulled out of our hats. Thus, we wanted to expand our direct email campaigns—only to be cut off by our long-time bulk email service, Constant Contact, because “we no longer service your industry—white supremacy.” This despite the fact that our policy recommendations are essentially those that elected President Trump. (Or maybe because of that fact). We’ve had to develop our own bulk email tool, in effect reinventing the wheel, and it’s proved very difficult.

We’re not out of tricks yet, and I remain optimistic about our ability to pull out of the slump. But an honest assessment of 2018 traffic is simply not rosy.

The year-over-year chart shows something interesting. While the baseline active users rate is slightly lower in 2018, the compounding variable is the elimination of traffic spikes. As you can see in the chart below, 2017 (in brown) saw spikes in traffic every week or two, consistently. That all stopped in September of 2017, save for two small bumps—one for Lance Welton’s ever-popular Spiteful Mutations article and one at the very end of the year.

2018 traffic (in blue) had virtually no spikes, excepting a small bump in late October on our Proud Boys coverage from Twitter, followed by another small bump a few days later on our Filipino bomber coverage, this time from organic searches.

The implication here: VDARE.com articles are no longer allowed to go viral. By whom? How? Is there any way around it? These questions remain.

We are developing other mediums, including Twitter and Gab. We have seen growth on our new YouTube channel, youtube.com/vdareTV, which is still in its early stages but quickly taking hold. We have almost 1,500 subscribers tuning in each weekday for Wilson Hewlett’s VDARE Video Digest, the daily summary of VDARE.com’s headlines. We’ll be adding more content soon—so be sure and subscribe to keep up!

As has been our tradition in the past couple of years, Peter and I made a point of hosting private dinners and receptions around the country as we traveled for family and public appearances. This year we hosted events in locations including Manhattan, DC, Houston and Dallas. It’s one of the highlights of my job to be able to meet our readers in person, network with political allies and really encourage the bonds of fraternity at these private events. 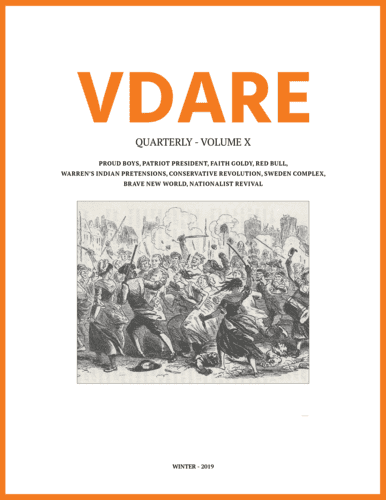 2018 was the second year we’ve been publishing the VDARE Quarterly magazine, which continues to be well-received. We tightened ship and streamlined the process, and now the magazine is consistently delivered on time! A real feat, if you ask me!

The magazine provides recurring donors with both digital and hardcopy versions of a beautifully-designed quarterly digest of VDARE.com’s most compelling articles. (Sign up here!)

Overall, donations in 2018 were steady, with a few surprise large gifts coming in. Again, this is particularly interesting given the traffic trouble. Apparently, fewer new people are visiting our site or seeing our material, but those of you who are visiting are more committed than ever. I can’t thank you enough for that, and I pray that it sustains us through this difficult time.

With your donations, you make it possible for VDARE.com to shape public discourse with some of the most powerful influencers in American politics today: activists and politicians who work tirelessly for patriotic immigration reform. But their efforts are only as good as the information we are able to give them, and we face unprecedented challenges to produce and distribute it.

The major resources shift in 2018 was, of course, toward our legal efforts. Leftist have been unable to refute the message of patriotic immigration reform in public debate, so they turn to increasingly Totalitarian methods. In many cases, those methods are illegal. We must fight back, and we are doing so now.

Here, you can find the VDARE 2018 Challenges Report [PDF] that spells out the battles before us in more detail, and how you can help us fight back. Please read it and share it with others. 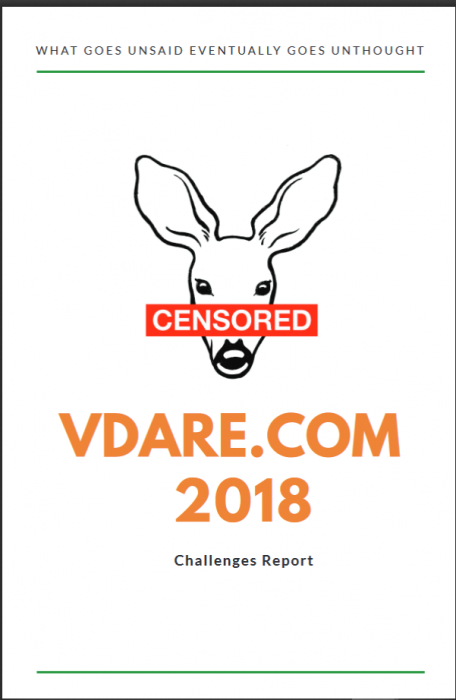 I hope you see that the problems that threaten VDARE.com are not our problems alone. They are some of the many symptoms of diseases spreading throughout America and the West—diseases that, if not treated with a hard dose of patriotic immigration reform, will kill the America we know and love.

This endless persecution—venue cancelations, de-platforming, refusal of services, smearing and libel–has got to stop. This year, 2019, will be characterized by our pushing back across the board.

We’ll publish the details of our legal cases on VDARE.com as they develop, and each update will be conveniently listed on the VDARE.com Legal Defense Fund page.

Peter and I, and all of the writers and editors at VDARE.com, could not provide a voice for the Historic American Nation—or anything else –without the loyal and generous support of you, our donors.

We receive no support from major foundations or government funding. Every single article, book, speech or public appearance you see from VDARE.com is funded directly from the individual donations sent in by our readers.

Once more, thank you.