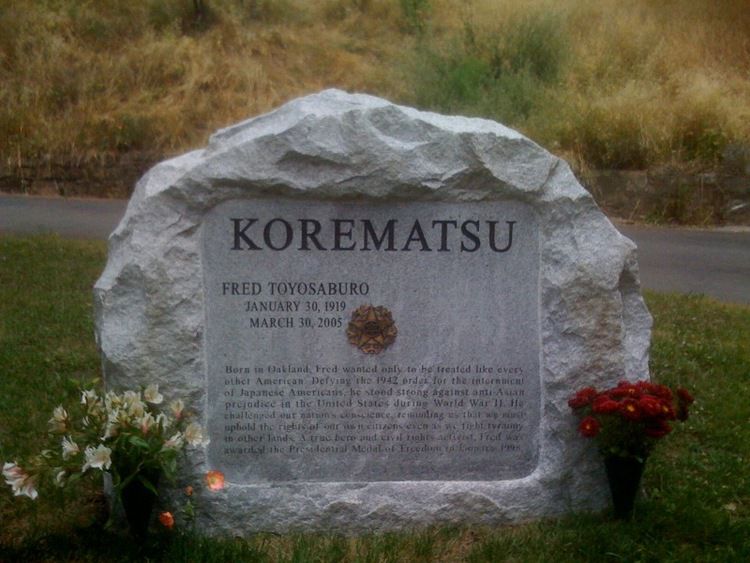 Fred Korematsu passed away last week at the age of 86. Korematsu is famous in civil liberties circles for being the subject of a test case about Japanese internment during World War II.

I was surprised to see in the picture published with the New York Times obit that, although Korematsu sat out the war in perfect safety in an internment camp in the United States, he was wearing a medal. [Fred Korematsu, 86, Dies; Lost Key Suit on Internment, By Richard Goldstein, April 1, 2005]

It turns out to be the Medal Of Freedom, awarded by President Clinton as part of an unofficial Diversity Medal Program.

Korematsu was "vindicated" in 1985, when Judge Marilyn Hall Patel second-guessed the Roosevelt Administration 43 years later, and declared that the Japanese were really no danger. (I doubt if she was exposed to much of the evidence in Michelle Malkin's book, In Defense of Internment.)

I was also surprised to see that Korematsu, rather than engaging in civil disobedience on principle, like Thoreau, or Gandhi, had done the following:

Korematsu was just a fugitive, but is it any wonder that when he was arrested across the bay, the headline read "Jap Spy Arrested in San Leandro"?

This was all public knowledge. I'd just never heard it. (Occasionally the press will actually suppress this kind of thing—see PBS's description of his behavior: " Korematsu refused to relinquish his freedom and tried to remain unnoticed, to no avail.")

What it was is this; instead of defying the government, or standing up for his rights, he tried to either hide, or run.

There was a Japanese-American who stood on his civil rights, and simply refused to obey the curfew; his name was Gordon Kiyoshi Hirabayashi.

He'd be a better candidate, as such, for the Medal of Freedom, because he stood on principle.

Of course, one of his principles was pacifism, which I think is a very bad principle, and he's spent most of his life since the war outside the US. So no medal for him. And of course, what Korematsu was really being decorated for was finally-successful litigation.

The Korematsu litigation was supported by the ACLU of Northern California—specifically by a lawyer named Ernest Besig. An ACLUNC appreciation of Mr. Besig has two revealing comments:

That's the ACLU, for you. Loaded with integrity—oh and, in their own words, "dangerous for the survival" of the United States.