BLM At The DNC: When Do "The Mothers Of ISIS" Speak?

See, earlier  The Mothers of the Movement–Hillary And The DNC Go All In For Dead Thugs

Whatever questionable choices were made at the Republican National Convention last week, I didn't hear of a single speaker whose sole accomplishment was raising a delinquent who attacked a cop. 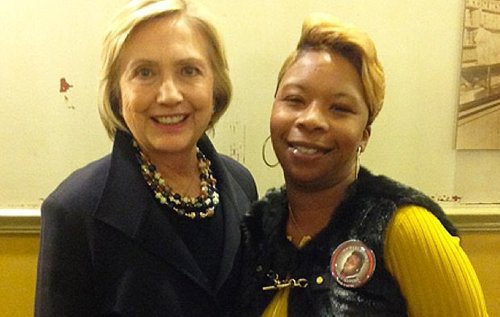 But as the country reels from the cold-blooded murder of five policemen in Dallas and three in Baton Rouge, Lezley McSpadden (right) mother of Mike Brown, America's most famous cop-assaulting criminal, appeared on stage at the Democratic National Convention.

The whole raison d'etre of BLM is the belief that cops are wantonly killing "black bodies." But only four of the dead black kids being honored were even killed by cops. Two were murdered by black gang members.

Of the four deaths that involved the police, all the victims were fighting the cops when they died.

In this regard, I notice that six of the nine "Mothers of the Movement" have different last names from their snowflakes. The children with the same names as their mothers were the two who were gunned down by black gangs, as well as one schizophrenic, who, unfortunately, had grabbed an officer’s baton and was hitting him with it when he got himself shot.

After massive, enormously expensive investigations, only one officer in any of these four cases was convicted of any offense: involuntary manslaughter for the 2009 shooting by a BART police officer of Oscar Grant—who was in the process of being arrested for an enormous public brawl when he was shot. Contrast his death with the deaths of 15-year-old Hadiya Pendleton and 16-year-old Blair Holt. Hadiya was shot in the back by black gang members, while in a Chicago park with her friends—who were mistaken for members of a rival gang. Blair was riding a school bus when a black gang member (pictured right)boarded the bus and began shooting.

The police are trying get these criminal gangs off the street! And their job would be a lot easier without thugs like Mike Brown violently attacking them.

It would be a lot easier if they weren't being constantly harassed by BLM and their lunatic accusations of racist policing.

It would be a lot easier if they were not being targeted for assassination and mass murders by homicidal nuts ginned up by BLM. (Shooting deaths of police are up 78 percent so far this year.)

And it would be a lot easier without a group — officially supported by the Democrats — leading marches down city streets, chanting, "What do we want? DEAD COPS! When do we want it? NOW!”

Why does the Democratic platform endorse Black Lives Matter? And, most importantly, why was Mike Brown's mother on stage at the Democratic National Convention?

As absurd as BLM's other cases are, none have been so authoritatively disproved as the yarn about "gentle giant" Brown begging for his life from Ferguson police officer Darren Wilson before being shot in the street like a dog.

Within a few weeks of the "hands up, don't shoot" narrative being broadcast as fact from every media outlet, we saw the video of the "gentle giant" robbing a store and roughing up the clerk shortly before his encounter with Officer Wilson.

This was followed by extensive investigations by both a grand jury and a Department of Justice led by the most racist, anti-police attorney general we've ever had, Eric Holder. But even Holder's Justice Department had to concede the whole "hands up don't shoot" story was a bald-faced lie.

Officer Wilson was completely cleared in the shooting of Mike Brown. As the investigations proved, Big Mike had violently assaulted Wilson, grabbed for his gun, and was charging the officer when Wilson shot and killed this raging behemoth.

However half-heartedly, Hillary claims to oppose cop-killing, so why is she using her convention to promote the biggest lie in the pantheon of anti-cop lies, and to celebrate a man whose most famous act was to violently assault a police officer?

Because of the despicable lies put out by BLM agitators, Wilson had to give up his career, move his family and will be forced to live in fear for the rest of his life. The town of Ferguson was destroyed, businesses burned to the ground, police officers attacked, people injured, the National Guard called in, and massive taxpayer money expended to contain the riots.

But at the Democratic Convention, Lezley McSpadden (mother of Mike Brown) was wildly cheered.

If Brown's mother had done something noteworthy, apart from raising a hoodlum—perhaps pioneering a cardiac stent that will save people's lives—then one could understand her being a "headliner" at the Democrat's convention. But, as I understand it, her sole claim to fame is giving birth to, and then carefully nurturing, a violent, cop-assaulting criminal.

Donald Trump, along with every other Republican ever to run for president, is required to repeatedly "disavow" David Duke—someone he's never met, never mentioned, never thought of—and certainly didn’t invite to speak at his convention.

But Hillary invites to her convention the mother of a man whose criminality destroyed a police officer's life, tore the country apart and gave birth to a murderous cop-hating movement. Will a single reporter ask Hillary to disavow that?