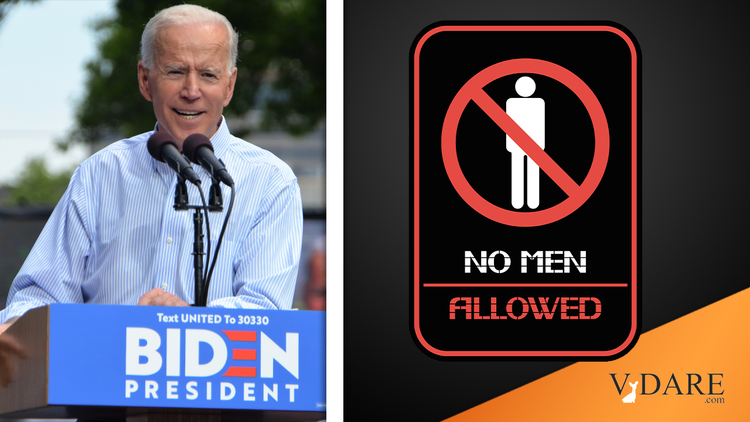 There is a real possibility that, this coming week, Joe Biden will be selecting the 47th president of the United States.

For the woman Biden picks—he has promised to exclude from consideration all men, black, brown, white or Asian—has a better chance of succeeding to the presidency than any vice presidential nominee in U.S. history, other than perhaps Harry Truman.

In 1944, the Democratic establishment engineered the dumping of radical Henry Wallace from Roosevelt's ticket. They could see from FDR's physical deterioration that he would not last through a full fourth term.

There are other reasons the woman Biden chooses in August may become our 47th president.

If Biden wins, he will be 78 when he takes the oath, older than our eldest president, Ronald Reagan, was when he left office after two terms. Biden would turn 80 even before he reached the midpoint of his first term.

Moreover, Biden has suffered a transparent deterioration of his mental capacities that was nowhere evident when he debated Mitt Romney's running mate Paul Ryan in 2012.

What are the odds that Biden would serve a full term?

Of our 45 presidents, nine failed to complete the term to which they had been elected. One resigned; four died in office; and four were assassinated. All nine were succeeded by their vice president.

John Tyler became president in 1841 when William Henry Harrison died a month into office of pneumonia, following an inaugural address of nearly two hours in the cold without an overcoat.

Tyler would effect the annexation of the Republic of Texas in his final days in 1845, fail to win his party's nomination to a full term, back the secession of Virginia in 1861, and end his days as a member of the Confederate Congress sitting in Richmond in 1862.

Mexican War hero and President Zachary Taylor died in his second year in 1850, to be succeeded by Millard Fillmore, who would go on to become the 1856 nominee of the anti-Catholic, anti-immigrant American Party known to history as the "Know Nothings."

Andrew Johnson became president after the assassination of Lincoln at Ford's Theater a month after Lincoln's second inaugural.

Johnson would be impeached in 1868 by radical Republicans who wanted a more severe Reconstruction of a defeated and occupied South.

Chester Arthur succeeded James Garfield in 1881 after President Garfield suffered a mortal wound from an assassin's bullet at a D.C. train station, only months into his first year in office.

Teddy Roosevelt became our youngest president in 1901 when he succeeded the assassinated William McKinley. In our own time, Lyndon Johnson succeeded John F. Kennedy after Dallas in November 1963.

In addition to Tyler, Fillmore, Andrew Johnson, Arthur, TR and LBJ, three vice presidents succeeded to the presidency in the 20th century on the death or departure of the men who selected them: Calvin Coolidge on the death of Warren Harding in 1923, Harry Truman on the death of FDR in April 1945, and Gerald Ford on the resignation of Richard Nixon.

Thus, of our four dozen vice presidents, all of whom have been white men, nine have risen to the nation's highest office to fill out a term of the president who selected him.

Yet, with the pandemic crisis, the economic crisis and the racial crisis gripping the nation, what are the unique conditions Biden has set down for the person he would put a heartbeat away from the presidency?

Biden began his selection process by eliminating and discriminating against whole categories of people.

First, no white men need apply. Second, no man of any race, color or creed will be considered. Gender rules them out, though every vice president for 230 years has been a man.

Nevertheless, says Biden, this one has to be a woman.

"No men need apply!" automatically eliminated 17 of the 24 Democratic governors who are men, including Andrew Cuomo of New York and Gavin Newsom of California, and it eliminated 30 of the 47 Democratic members of the Senate who are men.

In the aftermath of the George Floyd killing and protests, pressure has grown on Biden not only to choose a woman but a woman of color, and preferably a Black woman. If that were a criterion, it would eliminate all but a tiny few of the party's senators and governors.

What national interest impelled Biden to so restrict the pool of talent from which a possible presidential successor would be chosen?

Joe Biden would be the oldest man ever to serve as president. He would enter office with visibly diminished mental capacities. And he has decided to restrict his choice as to who should inherit our highest office by ruling out the vast majority of the most able and experienced leaders of his own Democratic Party.

Is this any way to select someone who could, in a heartbeat, take control of the destiny of the world's most powerful nation?

Whatever happened to Jimmy Carter's "Why Not the Best?"