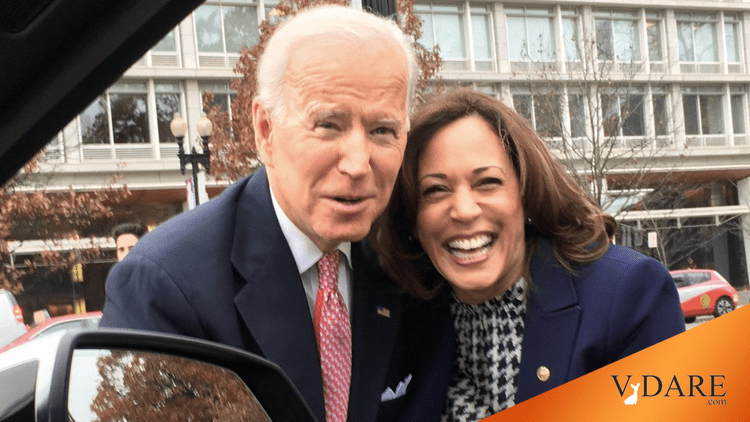 Kamala Harris is the people’s choice: Her advantage over Elizabeth Warren runs the demographic gamut. The only exception is among voters under thirty years of age, a notoriously unreliable cohort. Harris even beats Warren among Democrat primary voters who self-describe as politically liberal. Harris has a huge advantage over Warren among Hispanics (37% to 16%), a group Biden needs to shore up support with more than any other.

The neo-liberal establishment, including Silicon Valley, is more comfortable with Harris than with Warren. That Harris now enjoys more popular support than the Massachusetts’ senator, coupled with fate conspiring against Klobuchar, Abrams at this point deemed a bridge too far to be one stroke away from the presidency, and Gretchen Whitme—who struck us as unimpressive when we handicapped Harris as the most likely VP pick months ago—a total non-starter, suggests a forthcoming Biden/Harris ticket.

“Kamala Harris will be the Democrat presidential nominee” we said for years to an understandable mix of incredulity and derision. When she dropped out of the nomination process before the first state contest commenced, our outrageous audacity atrophied.

But it increasingly looks like we were merely premature in our prescience. Let us then revise that divination. Kamala Harris will be the Democrat presidential nominee in 2024. Speaking of, kindly be reminded of the following prognostications: the destruction of the dollar, the unraveling of the international credit system, and the political dissolution of these disUnited States–because they’re all coming, too, and in that order.