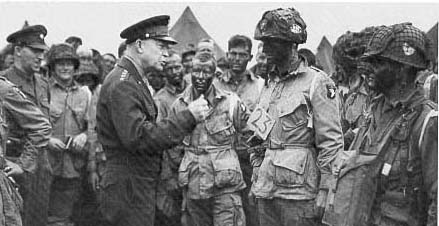 Shown is our 34th President when he was the Supreme Allied Commander and visited with the 101st Airborne as they prepared to jump into Nazi-held Europe on D-Day. Unlike the last several Presidents of both parties, Dwight Eisenhower was an American patriot, not a double-talking globalist ready to dissolve our nation's sovereignty for a misguided economic agenda.

When President, Eisenhower distinguished himself by deporting a million foreign nationals with no right to be here in Operation Wetback. (BTW, that now-discredited term was used by even left-wingers like Molly Ivins until recently.)

These days, we are not supposed to use the word "crusade" because Muslims will be offended. But Ike's call for a "Great Crusade" among the Allies on the eve of D-Day was stirring and noble. Have a listen.

Soldiers, Sailors and Airmen of the Allied Expeditionary Forces: You are about to embark upon the Great Crusade, toward which we have striven these many months. The eyes of the world are upon you. The hopes and prayers of liberty-loving people everywhere march with you. In company with our brave Allies and brothers-in-arms on other Fronts you will bring about the destruction of the German war machine, the elimination of Nazi tyranny over oppressed peoples of Europe, and security for ourselves in a free world.