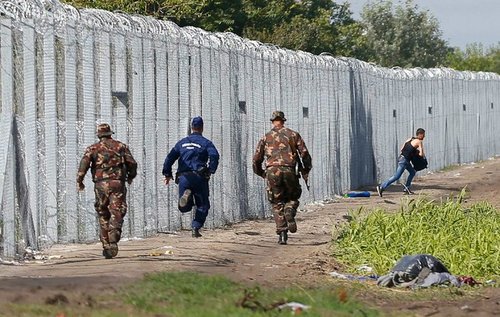 Re: Steve Sailer’s blog item “Migrant” Policy: The First Thing to Do When You Find Yourself in a Hole Is to Bully Your Neighbors to Start Digging

In the last three years, my husband and I have visited the Baltics, Finland, Poland, Hungary and the Czech Republic. We visited my husband’s Czech cousins while there.

In Hungary, we found economic times to be difficult. A local Roma college prof said that anyone who came to Hungary, got on the wrong bus.

Poland was overwhelmingly white and Catholic and they also are just getting out from under the economic cloud. They are living modestly. Why would a deeply Catholic country want lots of Muslims?

In May, we heard directly from locals in Estonia and Lithuania that they had been invaded many times and they were having none of it with the Muslims. That was pretty clear.

The Poles, Hungarians and the Czechs are not on the Euro because they don't have the financial strength to be accepted; so, their people are right to be wary of Muslim males wanting jobs.

As for the US, I’m told that we could support six refugees in situ overseas for the same amount of money as we spend on one by moving him to the US.

Linda Thom used to live in Santa Barbara, but now lives in the Pacific Northwest, where people mow their own lawns. They don’t need refugees there, either.