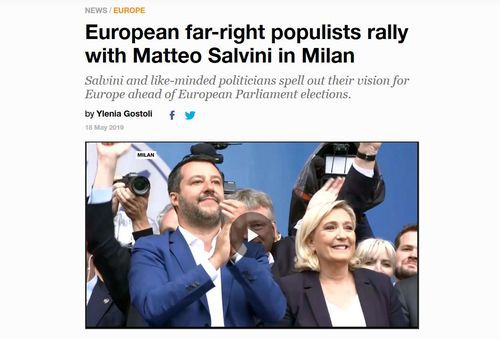 Patrick J. Buchanan: Has the Day of the Nationalists Come?

A week from today, Europeans may be able to gauge how high the tide of populism and nationalism has risen within their countries and on their continent.

For all the returns will be in from three days of elections in the 28 nations represented in the European Parliament.

Expectation: Nationalists and populists will turn in their strongest performance since the EU was established, and their parliamentary group—Europe of Nations and Freedom—could sweep a fourth of the seats in Strasbourg.

Nigel Farage's new Brexit Party is predicted to run first in the British elections, winning two to three times the votes of the ruling Tory Party of Prime Minister Theresa May.

In France, Marine Le Pen's National Rally is running even with the party of President Emmanuel Macron, who pleads for "more Europe."

Matteo Salvini, interior minister and leader of the League, predicts his party will finish first in Italy and first in Europe.

At Salvini's invitation, a dozen nationalist parties gathered in Milan this weekend. A week from now, they could be the third-largest bloc in the European Parliament. If so, their gains will come at the expense of the center-left and center-right parties that have dominated European politics since World War II.

Speaking before tens of thousands in front of Duomo Cathedral in Milan, Salvini threw back in the faces of his enemies the taunt that these new parties are rooted in the old ugly politics of the 1930s.

While the European establishment draws parallels between the populist parties of the present and what happened in the 1930s, it fails to recognize its own indispensable role in generating the mass defections to the populist right that now imperil its political hegemony.

The populist-nationalist parties are energized and united by both what they detest and what the EU has produced.

And what is that?

They resent the inequities of the new economy, where the wages of the working and middle class, the core of the nation, have fallen far behind the managerial class and the corporate and financial elites.

People who work with their hands, tools and machines have seen their wages arrested and jobs disappear, as salaries have surged for those who move numbers on computers.

The disparities have grown too great, as has the distance between national capitals and national heartlands.

Then there is immigration. Native-born Europeans do not welcome the new ethnic groups that have come uninvited in considerable numbers in recent decades, failed to assimilate and created enclaves that replicate the Third World places whence they came.

If one could identify a cry common to populists, it might be: "We want our country back!"

Whatever may be said of populists and nationalists, they are people of the heart. They love their countries. They cherish the cultures in which they grew up. They want to retain their own unique national identities.

What is wrong with that?

Patriotism is central to nationalist and populist movements. Globalism is alien to them. They believe in De Gaulle's Europe of nation-states "from the Atlantic to the Urals," not in the abstract Europe of Jean Monnet, and surely not in the Brussels bureaucracy of today.

The nation, the patria, is the largest entity to which one can give loyalty and love. Who would march into no man's land for the EU?

Europe's nationalists are not all the same. The ruling Polish Law and Justice Party disagrees on Putin's Russia with the ruling Fidesz Party of Prime Minister Viktor Orban in Hungary.

While the EU Parliament does not possess great power, these elections are not without great meaning.

Consider Farage. Should his Brexit Party run first in Britain, how can the Tory Party not carry through on the 2016 vote to withdraw from the EU, without betraying its most loyal constituency on its most critical issue?

Nationalism in Europe is spreading, even deepening rifts between the premier powers in the NATO alliance.

Germany will not be reaching the promised 2 percent of GDP for defense President Donald Trump has demanded. And Berlin is going ahead with a second natural gas pipeline under the Baltic Sea to Germany from Russia, Nord Stream 2.

Turkey is taking possession of a Russian-built S-400 air defense system this summer, despite a U.S. warning that our sale of 100 F-35s will not go through if the Turks go forward with the Russian system.

Have the nationalists of Europe caught the wave of the future?

Or will the future see the revival of the idea of One Europe, a political and economic union that inspired the dreamers of yesteryear?