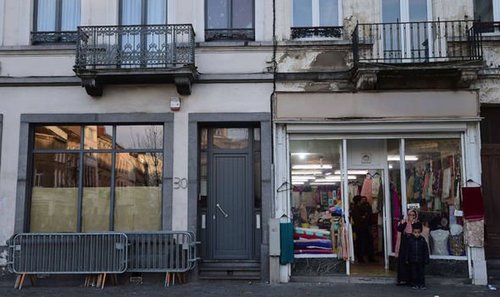 If you ask why France has so many angry Muslims, you’ll hear a laundry list of reasons specific to France:

In other words, it’s not the Muslims, it’s the French.

But right next door to France is Belgium, which is the opposite of France in most of the ways cited as provoking innocent Muslims. And yet its Muslims are at least as jihadi angry as France’s, sending the highest per capita rate to ISIS of any European country’s Muslims. From the NYT:

BRUSSELS — The shocking and bloody attacks in Paris on Friday, Nov. 13, left a trail leading to France’s small northern neighbor, Belgium — more precisely to its capital, Brussels, and to a specific district, Molenbeek.

Here, weeds line the sidewalks and dilapidated buildings stand next to modest houses, like a few rotten teeth that were never pulled or fixed. In this down-at-the-heels but vibrant borough of nearly 100,000 people, about 40 percent are Muslims, and about three-quarters of them are of Moroccan origin or ancestry. This community dates back to the 1960s, when a demand for labor led to a wave of immigration from Morocco.

What is striking about Brussels is that, unlike Paris, where the immigrant neighborhoods, or banlieues, are banished to the periphery, ours are at the heart of the capital. Molenbeek is easily reachable by bus and Metro, and a mere 25-minute walk to the city center.

Molenbeek was originally a factory district located at a nexus of canals and railways in Brussels — known as “Little Manchester” because of the concentration of industry. Eventually, the factories closed, and Molenbeek became a working-class residential area — and a home to new immigrants, where you will find lively teahouses and snack bars where men enter laughing, calling one another sahbi, my friend.

But Molenbeek is also home to terrorist plotters.

The assassination of the Afghan anti-Taliban commander Ahmed Shah Massoud, immediately before the Sept. 11 attacks in 2001; the train bombings in Madrid in 2004; and the killing of four people at the Brussels Jewish Museum in 2014. And just this year the foiled shooting on a high-speed train, the anti-terrorist raid in the eastern Belgian town of Verviers, the attack on a Paris kosher supermarket and, finally, the Nov. 13 attacks on the French capital — all had some connection to Molenbeek.

What makes Molenbeek such a hotbed for Islamist radicalism?

The most obvious reason is the deep divisions in Belgian society. The country suffers from a form of linguistic apartheid that divides the Dutch-speaking Flemings and the French-speaking Walloons. Listening to their respective media outlets and politicians, you could be forgiven for thinking that the country of Belgium doesn’t exist. The two communities live completely apart.

This also leads to administrative dysfunction:

Belgium was intentionally set up by the strong state Great Powers of the 19th Century to be a wealthy but weak neutral state on the main Western European linguistic divide. Belgium gathers together Catholics who speak both French and a local version of German, but as religion has faded as an identity pole, it’s just two sets of people who don’t find it convenient to communicate.

So due to the lack of Belgian nationalism that would inspire Belgians to clean up their institutions out of national pride, Brussels has long been a center for high end organized crime, such as international gun-running, along with government bribery and sex scandals. Of course, it’s home to the E.U. and NATO. It’s a strange place, ultra-civilized, highly competent, and somewhat bland, but with a certain sinister Italian Renaissance undertone.

… That police and intelligence officers largely left radicals alone, assuming that potential jihadists could be easily monitored by informers, has proved another tactical blunder — one for which some blame the Socialist mayor of Molenbeek from 1993 until 2012, Philippe Moureaux. Critics say that Mr. Moureaux, a popular figure in Molenbeek, was responsible for the hands-off policy for fear that more intrusive policing might anger the district’s Muslim voters. …

What is striking about the homegrown jihadist activities in Molenbeek is that the district has functioned as a kind of base camp for attacks on France, rather than on Belgium itself. Apparently, Brussels is deemed a safe hide out conveniently close to France — the real target. …

This is Belgium’s chance to cast off its reputation as Europe’s leading exporter of jihadists. But if it is handled badly, Brussels could become a target, rather than a base, for Islamist terrorism.

In summary, it’s less the specific things that Europeans try to do that anger Arab Muslims, it’s just that Arab Muslims tend to have chips on their shoulders.