Nigel Farage recently pointed out the threat posed by leftist billionaire George Soros’ nation-killing project of sowing anarchy throughout the US and Europe. Brexit leader Farage has been visiting New York City and appeared on the Fox News @ Night show with Shannon Bream.

There’s no doubt that Soros is a great evil: he has been generously spending his billions to tear down the nation state to build a globalist empire. Any trouble he can stir up, he’s there. In one example out of many, it was reported in 2013 that a Soros group spent more than $70 million since 2005 to increase diverse immigration to America and thereby change the national culture forever. In 2015 he donated millions to worsen anti-cop activism in Ferguson when the lack of jobs was a more serious problem following decades of outsourcing.

It was little reported outside of California, but Soros spent $1.5 million in the June 5 primary of district attorneys, seeking to install leftist candidates with more interest in prosecuting police than criminals, a strategy he has employed elsewhere. Fortunately, he was mostly unsuccessful in California.

Soros’ unwanted political meddling has made him persona non grata in his Hungarian homeland, as mentioned in the Fox interview.

BUDAPEST (Reuters) – Hungary’s parliament on Wednesday approved a package of bills that criminalizes some help given to illegal immigrants, defying the European Union and human rights groups.

The legislation narrows the scope for action by non-governmental organizations (NGOs), making their workers liable for jail terms for helping migrants to seek asylum when they are not entitled to it.

Prime Minister Viktor Orban has led eastern European opposition to EU quotas that aim to distribute asylum seekers around the bloc, criticizing the open-door policy that German Chancellor Angela Merkel proclaimed at the height of the European migrant crisis in 2015.

Below, a government billboard posted in Budapest in February 2018. The translation: “Soros wants to transplant millions from Africa and the Middle East.” 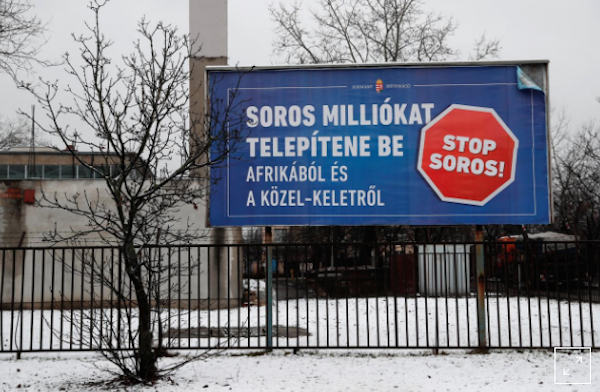 SHANNON BREAM [2:20]: Now I want to talk about these bills in Hungary that have now been passed that are called the Stop Soros bills that essentially — here’s what one report says, this is out of Reuters Budapest saying this, “The Hungarian people rightfully expect the government to use all means necessary to combat illegal immigration and the activities that aid it.” That comes from their interior minister [Sandor Pinter]. He says, “The Stop Soros package of bills serves that goal, making the organization of illegal immigration a criminal offense. We want to use these bills to stop Hungary from becoming a country of immigrants.” Wow!

NIGEL FARAGE: Well because what Soros has done — he’s actively encouraging people to come across the Mediterranean to flood Europe, and okay you know Angela Merkel played the useful idiot in many ways in helping this to happen. I think we underestimate who George Soros is. You know the Open Society organization that he funds has already spent $15 billion in campaigning, and it’s due to receive another $20 billion.

This is an organized attempt on a huge scale to undermine nation-states, to undermine democracy and to fundamentally change the makeup demographically of the whole of the European continent, and thank goodness Viktor Orban in Hungary has got the courage to stand up against him. But I tell you something, if you criticize Soros, his media friends accuse you of being an anti-semite. It is quite extraordinary and I really feel that Soros in many ways is the biggest danger to the entire Western world.