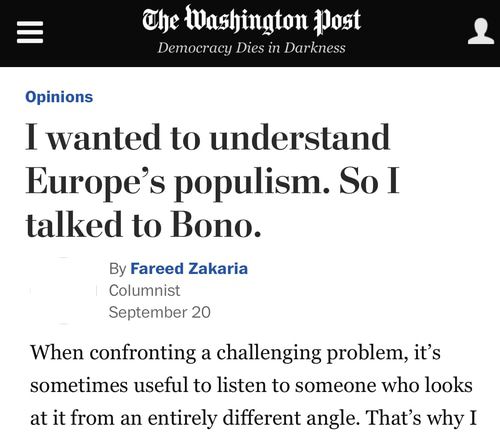 Fareed Zakaria: "I Wanted to Understand Europe’s Populism. So I Talked to Bono."

I assumed this headline was self parody, but maybe it isn’t. From the Washington Post:

I wanted to understand Europe’s populism. So I talked to Bono.

When confronting a challenging problem, it’s sometimes useful to listen to someone who looks at it from an entirely different angle. That’s why I found it fascinating to talk about the rise of populism and nativism with Bono last weekend at a summit in Kiev. …

Bono’s message resonated because I had been reading Francis Fukuyama’s new book, “Identity: The Demand for Dignity and the Politics of Resentment.”

My review of Fukuyama’s Identity: The Demand for Dignity… is here.

What people in Europe and the United States ought to be proud of, what they should celebrate, are the remarkable achievements of diversity.