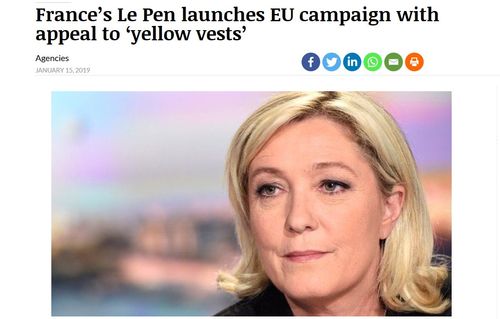 The "yellow vest" protests are continuing in France, though they aren't getting the huge media coverage anymore. A number of contradictory demands have been put forward by people claiming to be "yellow vests." Of all the parties however, Marine Le Pen's National Rally (formerly the National Front) has been most active in supporting the movement. While it is not true to say the yellow vests are all "nationalists," it is fair to say that many of them are likely to vote for Le Pen in the upcoming EU elections, if only to show opposition to the current French government.

French far-right leader Marine Le Pen launched her campaign for the May 26 European Parliament election on Sunday with an appeal to the broad “yellow vest” protest movement that has rattled the government.

Le Pen urged the tens of thousands of protesters who have staged weekly protests against President Emmanuel Macron since November to make the EU vote a referendum on his policies. “In the context of the healthy popular revolt of the yellow vests, this election offers a chance to end this crisis born of the intransigence and contempt … of an incompetent president whose behaviour is disturbing,” Le Pen told an election rally for her National Rally (“Rassemblement National”) party.

Born from a grassroots protest against high fuel prices, the yellow vests have become a broad and sometimes violent movement demanding more social justice for low-skilled workers left behind by globalisation, deregulation and EU integration.

Although independent of parties and unions, the movement shares many of the RN’s demands: proportional representation in parliament, direct democracy through Swiss-style referendums, less European integration and – above all – Macron’s resignation.

A decision by a small group of “yellow vest” protesters to contest May’s European Parliament elections has exposed deep splits within their amorphous anti-government movement about whether and how to become a more organized political force...

The survey by pollster Elabe, published on Wednesday, showed the “yellow vests” winning 13 percent of the vote in France.

It also showed Marine Le Pen’s far-right National Rally - formerly the National Front - winning 20.5 percent of votes without a yellow vest list. This fell to 17.5 percent with a yellow vest challenge, while Macron’s centrist pro-EU party would suffer only a 1 point fall to 22.5 percent.

What's more, when broad based protest movements try to develop a platform, they often splinter and fall apart. A few years ago, Occupy Wall Street generated real momentum and looked like it was going to present a challenge to finance capitalism. Yet the protests disintegrated over issues of identity politics and a failure to develop a coherent message. The slogan, "What is our one demand?" was everywhere, yet I can't remember what that demand was. I don't think they ever determined it.

During the current protests, President Macron has become a stand-in for an entire corrupt system. If there is one demand that can unite the entire movement, it should be opposition to his program. Creating a political list ironically increases the chance that he will be able to survive the EU elections. Though there are several months before the elections, the early view is that the "yellow vest" candidate list is a strategic error that will weaken the movement at the street level and ironically strengthen Macron at the electoral level.