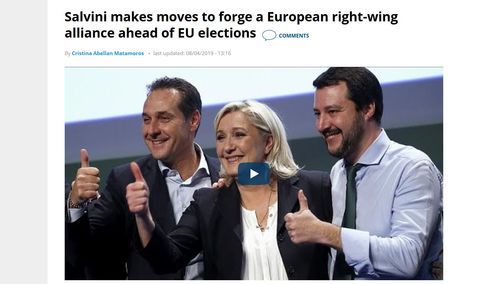 [See Also: VDARE Radio: Can The European Union Be Taken Over By Nationalists?, March 19, 2019]

Once again, Italy shows the way. Specifically, Italian Interior Minister Matteo Salvini is providing the model for European nationalists. Now, he is the leading figure in creating a united nationalist bloc for the upcoming European Union elections.

With European elections looming closer and closer, Italy’s Deputy Prime Minister Matteo Salvini is launching his campaign for the elections on Monday with the hope of forging an alliance of nationalist groups that can grab seats from the more conventional parties.

Under the slogan "To the Europe of Common Sense!” Salvini is holding a meeting with other European populist parties in Milan.

Europe’s right-wing populist parties are currently divided into three groups: The Europe of Nations and Freedom (ENF) group — which includes Italy's the League, France's National Rally, Austria's Freedom Party and the Netherlands' Party for Freedom — the European Conservatives and Reformists (ECR), which groups the Danish People's Party and the Finns Party among others, and the Europe of Freedom and Direct Democracy (EFDD), which has the Alternative for Germany (AfD) and the UK's Brexit Party .

For some time, Salvini’s dream has been to unite all of these blocs and form a unified cross-border alliance.

At a press conference following the meeting, Salvini of the anti-migrant League, said that the aim of the coalition was to become the main group in the next European Parliament, "the most numerous, important, determined and forward-looking group".

There are of course still significant divisions. "Nationalist" has different connotations in different countries. Certainly, Marine Le Pen's National Rally would be considered "statist" by many conventional Republicans in the United States who call themselves "nationalists" because of President Trump. The same kinds of divisions among European nations may make forming a united bloc almost impossible. Of course, the grey Social Democrats of the center-left and center-right "conservatives" of the European People's Party don't really have this problem. They don't really believe in anything besides perpetuating the status quo.

Still, the idea of a united nationalist party is promising. Europhobic journalists are angry of course, which is always a good sign. Notice the scare quotes around "European culture" in the article below.

At the top of their common agenda, the right-wing euroskeptics demanded a halt to all illegal migration, stronger European borders, restoring political sovereignty to EU nations and protecting what they called “European culture.”

Salvini rejected any characterizations that the movement, which includes far-right parties, is made up of political extremists flirting with Europe’s totalitarian history.

“Today at this table there are no nostalgic extremists,” Salvini said. “The only nostalgics are in power in Brussels. Today, we look ahead with a clear memory of what happened in the past, but the tired debate of right, left, fascist, communist, is not what makes us passionate.”

Scare quotes around "African culture" or "Asian culture" would lead to the entire staff of the AP being fired, doxed, and attacked in the street.

One of the major questions is what will become of Hungarian Prime Minister Viktor Orban's Fidesz party. The European People's Party recently voted to expel Fidesz, though a final decision depends on a three person commission that will issue a report after the EU elections in May. In the Byzantine politics of the EU, somehow the suspension of Fidesz does not actually apply to the EPP Group of EU parliamentarians, so Fidesz European Parliament members still keep whatever positions they have.

Orban himself is sending conflicting signals about his aims. He seems to want to keep Fidesz in the EPP, asking other EPP leaders to reconsider their push for expulsion [EU Elections Will Define the Future of ‘Christian European Culture’ – Hungary PM, Sputnik News, April 8, 2019]

However, his party is also reportedly meeting with Salvini's proposed group.

While Orban claims he wants to stay in the EPP and the EPP Group, it has been reported that his party has been in talks Europe of Nations and Freedom Group, a far-right group including members from Italy’s Lega Nord (Northern League), France’s Rassemblement National (formerly National Front), and the Austrian Freiheitliche Partei (Freedom Party). Fidesz also seems to be close to Poland’s Law and Justice Party, which currently sits in the European Conservatives and Reformists Group.

It's clear that the EPP doesn't really want Fidesz in the group anymore, and the "Europe of Nations and Freedom" grouping would instantly gain credibility if the governing Hungarian party joined. However, though the EPP cringes from journalists demanding they denounce Orban, they value their positions within the European Parliament. And unless the elections turn out dramatically different than what people are predicting, there is no chance the EPP can do without Fidesz's seats. Thus, what will likely happen is some face-saving compromise for both Orban and the EPP.

The other major complicating factor is Salvini's proposed party. If Salvini can get the various national parties to unite and form a big enough bloc, Orban may decide he no longer needs the EPP. At the very least, it would strengthen his hand in negotiating with the EPP.

The EU elections next month are of critical importance for the entire Western world. We are all lucky a leader like Salvini has emerged at this crucial time.

If only President Trump would start acting like him. It's not too late.