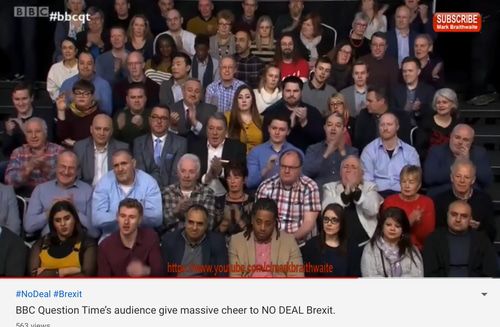 The fuss about Brexit over in the U.K. is of only indirect interest to us Americans, but it does show another aspect of the slow political revolution taking place all over the Western world.

As our own correspondent Robert Henderson posted here at VDARE.com on Thursday, the Brexit vote of June 2016—the vote by British people to leave the European Union—was of a piece with the election of Donald Trump five months later. Both events represented a revolt by ordinary citizens against entrenched Deep State elites and their media, corporate, and academic shills.

Two-plus years on, it's clear on both sides of the Atlantic that those entrenched elites were more entrenched than the revolutionaries supposed. Both in the U.S.A. and Britain, they have put up a mighty resistance to the loss of their power and influence.

So which revolution is doing better, ours or theirs? On the evidence of this week, I'd have to say Britain's is ahead.

British Prime Minister Theresa May had negotiated a deal with the EU, a package of conditions under which Britain could finally leave the EU on March 29th. It was a lousy deal for the Brits, keeping the nation chained to the EU bureaucracy in a hundred ways. "BINO" I called it back in December—Brexit in Name Only. Robert Henderson prefers BRINO, and I'm okay with that: the perception is the same.

Tuesday this week Britain's parliament finally got to vote on Mrs May's deal. They voted it down. That generated a mini-crisis as the opposition party in parliament called a vote of no confidence in the Prime Minister. That vote, however, went Mrs May's way, so she remains in power.

But since parliament's rejected her deal, what are the terms under which Britain will leave the EU on March 29th?

A strong possibility now is: no terms. This is the so-called "hard Brexit." Britain just walks out, leaving the bureaucrats and businessmen to sort things out among themselves as best they can.

There would be chaos and confusion; but, as Adam Smith said, there's a deal of ruin in a nation. The Brits have faced far worse within living memory. When the dust settled they'd have their sovereignty back, and could set their own laws in their own parliament for their own people again. That would be worth a bit of chaos.

A great many Brits agree. Here's a sound clip from last week. It's from a weekly show on BBC-TV called Question Time, in which a panel of pundits and politicians takes questions from a studio audience. This being the BBC the panels are slanted left-liberal, making it usually a pretty dull show.

This Thursday's Question Time panel, however, included political journalist Isabel Oakeshott. Following those earlier events of the week, the question of course came up: Is there now any alternative to a "hard Brexit"? Ms Oakeshott took the question. Here's what she said:

Oakeshott:  Well, the answer … look, I can save everybody a lot of time here …

Oakeshott:  The short answer is: No, there isn't. And that is why it seems to me the only option for Theresa May now—and I'm going to admit that it is a sub-optimal position—is to walk away. That is all she can do.

Emcee:  So to leave with no deal.

Oakeshott:  Yes, absolutely, because that isn't … (Drowned out by prolonged cheering and applause from the studio audience.)]

Just listen to that studio audience! Hard Brexit? They love it! The TV coverage is even more telling. They're happy, with the happiness of people who just heard an authority figure—Ms Oakeshott is the privately-educated offspring of an upper-class family—an authority figure taking their side against the elites.

I can't forbear adding that Question Time is a peripatetic show, set in a different city each week. Thursday's show was set in Derby, which is of course the capital city of Derbyshire …

It's worth adding also that the Brits seem still to have some of their resourcefulness in the face of impending chaos. The London Daily Mail, January 18th, reports a severe shortage of warehouse space in Britain on account of British firms stockpiling all kinds of goods, including food. The firms fear that chaos over the absence of customs rules at ports of entry following a hard Brexit will slow down or stop entry of goods.

That's private action, not government action; but I'm reminded of Margaret Thatcher and the crisis with Britain's coal miners in the early 1980s. When the miners' union leaders first started acting up, Thatcher appeased them with soft talk. Meanwhile, behind the scenes, she called in her Energy Secretary Nigel Lawson and told him to start stockpiling coal.

When the stockpile was big enough, Thatcher turned on the miners and confronted them boldly, from a position of strength. She was a smart lady, and that's smart government. You listening, Mr President?