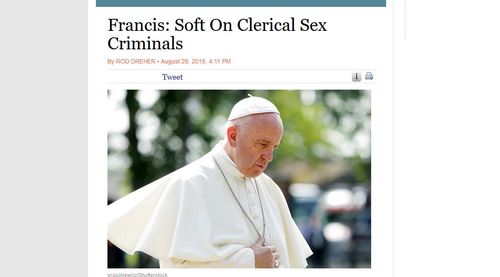 This summer, the sex scandal that has bedeviled the Catholic Church went critical.

First came the stunning revelation that Cardinal Theodore McCarrick, former Archbishop of Washington and friend to presidents, had for decades been a predator-priest who preyed on seminarians and abused altar boys, and whose depravity was widely known and covered up.

Came then the report of a Pennsylvania grand jury that investigated six dioceses and found that some 300 priests had abused 1,000 children over the last 70 years.

The bishop of Pittsburgh, Donald Wuerl, now Cardinal Archbishop of Washington, defrocked some of these corrupt priests, but reassigned others to new parishes where new outrages were committed.

This weekend brought the most stunning accusation.

Archbishop Carlo Maria Vigano, Vatican envoy to the United States under Pope Benedict XVI, charged that Pope Francis had been told of McCarrick's abuses, done nothing to sanction him, and that, as "zero tolerance" of sexual abuse is Francis' own policy, the pope should resign.

In his 11-page letter of accusations, Vigano further charged that there is a powerful "homosexual current" among the Vatican prelates closest to the pope.

What did the pope know and when did he know it?

Not unlike Watergate, the issue here is whether Pope Francis knew what was going on in the Vatican and in his Church, and why he was not more resolute in rooting out the moral squalor.

Orthodox, conservative and traditionalist Catholics are the most visible and vocal demanding an accounting. Progressive and liberal Catholics, to whom Pope Francis and Cardinal McCarrick were seen as allies on issues of sexual morality, have been thrown on the defensive.

Now, accusations alone are neither proof nor evidence.

Yet there is an obligation, an imperative, given the gravity of the revelations, that the Vatican address the charges.

When did Pope Francis become aware of McCarrick's conduct, which appears to have been widely known? Did he let his close friendship with McCarrick keep him from doing his papal and pastoral duty?

This destructive scandal has been bleeding for decades. Too long. The Church is running out of time. It needs to act decisively now.

Priests who prey on parochial school children and altar boys are not only sinners, they are criminal predators who belong in penitentiary cells not parish rectories. They ought to be handed over to civil authorities.

While none of us is without sin, sexually active and abusive clergy should be severed from the priesthood. There needs to be a purge at the Vatican, removing or retiring bishops, archbishops and cardinals, the revelation of whose past misconduct would further feed this scandal.

For too long, the Catholic faithful have been forced to pay damages and reparations for crimes and sins of predator priests and the hierarchy's collusion and complicity in covering them up.

And it needs be stated clearly: This is a homosexual scandal.

Almost all of the predators and criminals are male, as are most of the victims: the boys, the teenagers, the young seminarians.

Secular society will call this invidious discrimination, but it is based on what Christ taught and how he established his Church.

Inevitably, if the church is to remain true to herself, the clash with secular society, which now holds that homosexuality is natural and normal and entitled to respect, is going to widen and deepen.

For in traditional Catholic teaching, homosexuality is a psychological and moral disorder, a proclivity toward acts that are intrinsically wrong, and everywhere and always sinful and depraved, and ruinous of character.

The idea of homosexual marriages, recently discovered to be a constitutional right in the USA, remains an absurdity in Catholic doctrine.

If the Church's highest priority is to coexist peacefully with the world, it will modify, soften, cease to preach, or repudiate these beliefs, and follow the primrose path of so many of our separated Protestant brethren.

But if she does, it will not be the same Church that over centuries accepted martyrdom to remain the faithful custodian of Gospel truths and sacred tradition.

And how has the embrace of modernity and its values advanced the religious faiths whose leaders sought most earnestly to accommodate them?

The Church is going through perhaps its gravest crisis since the Reformation. Since Vatican II, the faithful have been departing, some leaving quietly, others embracing agnosticism or other faiths.

"Who am I to judge?" said the pope when first pressed about the morality of homosexuality.

Undeniably, Francis, and the progressive bishops who urge a new tolerance, a new understanding, a new appreciation of the benign character of homosexuality, have won the plaudits of a secular press that loathed the Church of Pius XII.

Of what value all those wonderful press clippings now, as the chickens come home to roost in Vatican City?